The Government has this morning updated its travel advice to say anyone travelling back from the affected areas should remain at home, not come into contact with other people and to call NHS 111 – even if they are not displaying symptoms. But anyone returning from the wider region – anywhere above but not including Pisa, Florence and Rimini – have also been told to self-isolate. Health Secretary Matt Hancock told Sky News he does not think any Britons are currently trapped in the areas that have been quarantined by the Italian Government. 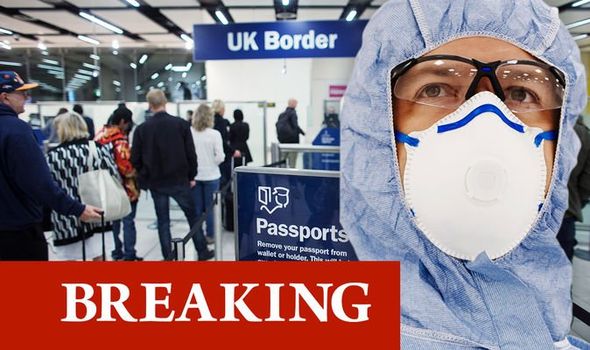 But he admitted the” significant outbreak” of cases is “worrying”.

Mr Hancock told Sky News’ Kay Burley: “Those who have been in northern Italy, if they feel ill and have flu-like symptoms, then you should self-isolate, stay at home and try not to see other people.

“If you have been to Italy in the areas that have been quarantined by the Italian government, then you should stay at home and self-isolate – even if you don’t have any symptoms.

“At present, we don’t think there are any Brits in the area that has been quarantined by the Italian Government

“This development in Italy is very worrying because it is a significant outbreak, with over 200 people affected.”

He also urged anyone that may be quarantined in the impacted areas in northern Italy to make contact with the embassy in Rome.

Mr Hancock said there were no changes to travel advice for those planning on going to Italy.

He again warned: “In terms of going to Italy as a whole we haven’t changed that travel advice.

“But we are clear that, if you come back from northern Italy and you have symptoms, then you should self-isolate.”

The updated advice comes after World Health Organisation (WHO) director general Tedros Ghebreyesus warned that the spread of coronavirus has the potential to hit the pandemic stage.

Thirteen people in the UK have so far tested positive for coronavirus – the most recent of which were rescued from the Diamond Princess cruise ship in Japan over the weekend.

The Health Secretary insisted he is “pretty worried” about the possible spread of coronavirus in the UK and although insisting containment is going well, “it is my job to be worried”.

But he insisted the UK has done a “huge amount” off work preparing in case coronavirus becomes a pandemic, including setting up testing facilities outside A&Es and preparing home testing kits.

Mr Hancock also warned people in the UK “shouldn’t be surprised that there are cases this close to home”.

He said: “I’m pretty worried but we have the plans in place.

“We have the procedures her and the containment is going well but it is my job to be worried, and that is what you expect of a Health Secretary in the middle of what is a global outbreak.

“Since the outbreak became public at the start of this year, we have been doing a huge amount of work to prepare in case this becomes a pandemic.

“Once it gets to that point there isn’t a way to stop it coming into the UK in a big way.

“It is not yet clear that it will become a pandemic – the number of cases in China has been slowing over the last couple of weeks and we are relatively confident that information is correct.

“Now there are more cases outside China, but at the moment if those countries get their response right and get the numbers coming down as China has then there still is the possibility this is a relatively small outbreak in the UK.

“We still expect more cases but a the moment there are 13 cases in the UK.”

Mr Hancock added: “From when this outbreak first went public at the start of January, we have been clear we expect cases here, so people shouldn’t be surprised that there are cases this close to home but it just shows how important the preparations are.”

There are now over 200 confirmed coronavirus cases in Italy, with seven people dying from the deadly disease.

Authorities there are fighting to contain the biggest outbreak of coronavirus in Europe so far, which has forced Austria to assemble a special Taskforce to consider border controls.

China reported 508 new cases of coronavirus and a further 71 deaths on Tuesday – 68 of which were in the city of Wuhan, where the epidemic was first detected in December.

There have so far been 77,658 cases and 2,663 deaths from coronavirus in mainland China, with South Korea now having the second highest number of cases in the world with 893 and eight deaths.