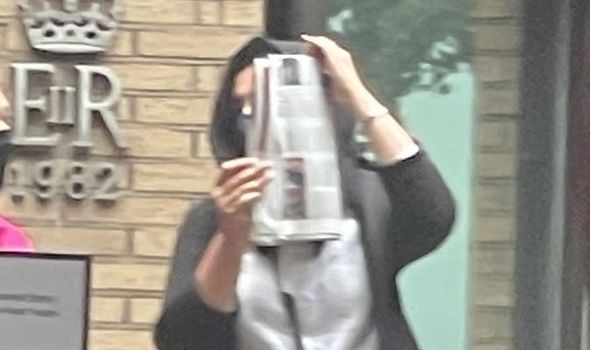 Shareen Kashif, 29, from the Central East Command Unit, admitted knowing her husband, who was also a Met officer, was involved in an organised crime group.  Kashif Mahmood was jailed for eight years in May for seizing at least £850,000 in drug money.

He pleaded guilty to conspiracy to acquire criminal property and misconduct in a public office in August.

Mahmood would appear to be carrying out his job as he seized the money while in uniform and travelling in marked and unmarked police cars.

The court heard it is not clear how much cash was in the box when she hid it during the raid in April last year.

Another change of entering into a money laundering arrangement was ordered to lie on the file.

Prosecutor Tom Williams said this decision was made as it would have been difficult to prove Khashif allowed her husband to use two bank accounts under her name to launder money.

Mr Williams said: “She’s a serving police officer she felt it was worth the risk of hiding the box when police arrived.

“There must have been a substantial amount in it otherwise there wouldn’t have been a risk worth taking. She knew it was money and she accepts that now – it’s something she did not accept in interview.

“Realistically if it was a box that could be carried around and successfully concealed… it seems it was no more than £100,000.”

Allan Compton QC, defending, said Kashif is now the sole carer for a two-year-old daughter she shares with her now imprisoned husband.

He said: “She knew it was a box, she moved it at the request of her husband at 2.40am in the morning when police raided the premises and she accepts it’s not containing a few loose coins or a few hundred pounds.

“It’s not a huge box. It’s likely that the focus of sentencing will not be whether the custody threshold is crossed but where any sentence should be suspended.”

Kashif, of Harlow, Essex was bailed with a condition of living at her address.

The police constable was suspended from the force after her arrest in July last year.

Sentence was adjourned until October 27 for a pre-sentence report to be prepared.