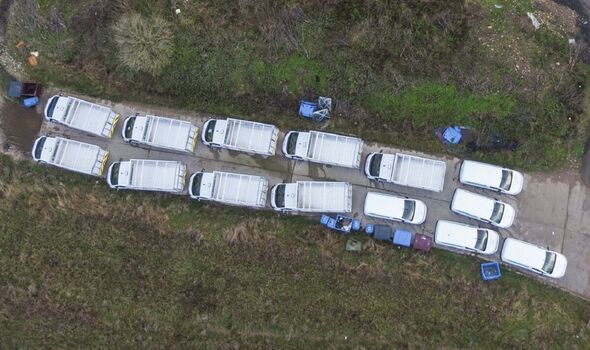 York Council put £8m into a lengthy procurement project to replace their gas-guzzling diesel trucks, used for general litter collection, with more eco-friendly vehicles. But councillor Mark Warters, 58, labelled the project “farcical” and an “embarrassment” after it was revealed delays with charging infrastructure meant some couldn’t be used.

And photos taken by a whistleblower showed the brand new electronic trucks, embossed with the City of York logo, sitting idle in a tarmacked storage yard.

A council spokesperson admitted that construction of the charging points was “behind schedule” but claimed it was better to purchase the vehicles early due to inflation.

However, Mr Warters felt bosses had concealed the wagons deliberately while alleging that taxpayers’ money was used to cover their storage, which officials denied.

He said: “There are 25 vehicles out of what’s arrived that haven’t been used yet and are just hidden away because they’re an embarrassment.

“Basically, they’ve got nowhere to charge them.

“They’re behind with installing the charging infrastructure but because they’d already procured the electric vehicles, they’re obviously having to accept them.

“You would have thought there would be satisfactory due diligence carried out before you engage in an £8mil procurement project to turn a whole local authority fleet over from diesel-petrol to electric.”

It’s understood that the council spent around £6.5mil of their procurement budget on new vehicles, whilst the other £1.5mil covered the creation of new charging stations.

But Mr Warters questioned how the project would work in practice, saying council staff would need to keep vehicles at home overnight, where they can’t be charged.

He said: “The wider side of this is, even when they get the charging infrastructure in place, how you actually manage a fleet of vehicles when this when there are a lot of council workers that will start at ridiculous hours, 5am or 5.30am in the morning?”

“It’s always been accepted practice that those people take these vehicles home with them. So they’re already questioning how that system would work.”

A spokesperson for York Council told a local paper: “Our ambitious EV strategy has delivered 39 new electric vehicles to the council including the two electric waste vehicles.

“Thirteen of these are in operational use by the services, 15 are in the yard in the process of being deployed and 15 are at Harewood Whin awaiting deployment.

“Those that are being used are being charged either at the depot or at Hyperhubs and public charging points. There are more chargers to go into the depot and this work is underway.

“This work is behind schedule, partly due to a power outage and the associated works with dealing with finding existing cables at the depot which were not inducting as indicated on the plans.”

The spokesperson said there was no charge for storing the vehicles at Harewood Whin, as the council had agreed on a deal with waste management company Yorwaste.

They added: “It is also important to note that the cost and demand for electric vehicles is rising so quickly that should we have waited for the infrastructure, the inflation would have driven the cost significantly higher, indeed the vehicles in storage are already more valuable now than when we purchased them.

“Also, and possibly most importantly, if we waited for the infrastructure before ordering the vehicles then we would be waiting around a year for vehicles to arrive, such is the lead in time for EV commercial vehicles.

“That’s why we took the decision to order so they were ready to deploy as soon as possible.”

City of York Council have been contacted for further comment.

Death Toll From Collapsed Buildings in Marseille Rises to 6