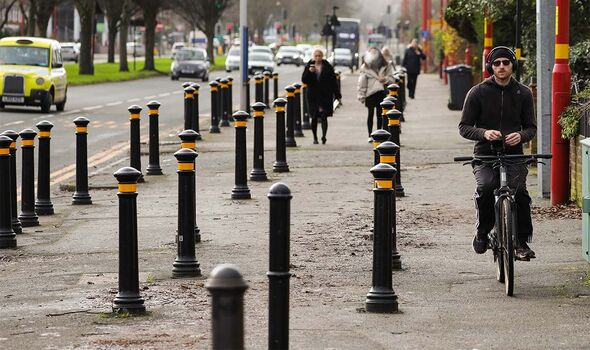 A ‘cash-strapped’ council has been slammed by local residents for their ‘barmy’ decision to install 60 bollards outside a primary school. Located along the A38 Bristol Road between Longbridge and Northfield, residents claim the traffic calming measures are an ‘unnecessary eyesore’ and could actually prove more dangerous for cyclists, pedestrians and other road users.

The bollards reportedly appeared outside Meadows Primary School, which caters for around 700 children, around 18 months ago. However, after a video of the sprawling 50 metre (164ft) stretch was shared on social media this week, many locals began branding it a complete waste of taxpayers’ cash.

Neighbours living nearby have also revealed how they were left just as confused by the decision to install three rows of 60 bollards – instead of just a fence.

Mum-of-one Jessica Grant, 38, who lives nearby, said: “They popped up out of nowhere about 18 months ago and everyone was just a bit baffled. We’re all for traffic safety around a primary school but this just looks like a weird slalom of posts more suited to the Winter Olympics. A simple fence or some barriers along the side of the road would have done the job but this is surely more expensive. It’s an absolute eyesore too and if anything could prove more dangerous for cyclists or pedestrians trying to navigate it. Delivery drivers have also been unable to park up and I hear parents have had difficulties too.

“I’ve never seen anything like it anywhere else to be honest.”

Another local, who did not wish to be named, added: “Serious questions have to be asked of the council. It’s barmy. Who on earth thought this was a good idea?

“We have had problems with parking near the school but this is an unnecessary eyesore and complete overkill by the council. The first row nearest the road I sort of understand but the rest of them are just weird.”

Earlier, the World Bollard Association tweeted an image of some bollards outside a shop in Asia with the caption: “There’s no such thing as too many bollards”

One web user replied with footage of the Birmingham stretch and wrote: “The A38 between Longbridge & Northfield (Birmingham) would seem to agree.”

One person commented: “Trees would serve same purpose and you know, look good while doing it.”

Another added: “Ah, yet another local authority resorting to this ridiculous solution to much bigger infrastructure problems.”

Someone even went as far as to compare it to the Siegfried Line – Hitler’s World War II defensive line – which stretched 390 miles along the German border.

When asked about the bollard installation, Birmingham City Council responded by saying: “We receive regular complaints from residents about inconsiderate and dangerous parking outside the school. We are working with the school to help challenge this behaviour and encourage walking and cycling where appropriate, but unfortunately the number of bollards that have been installed demonstrates the scale of the problem.