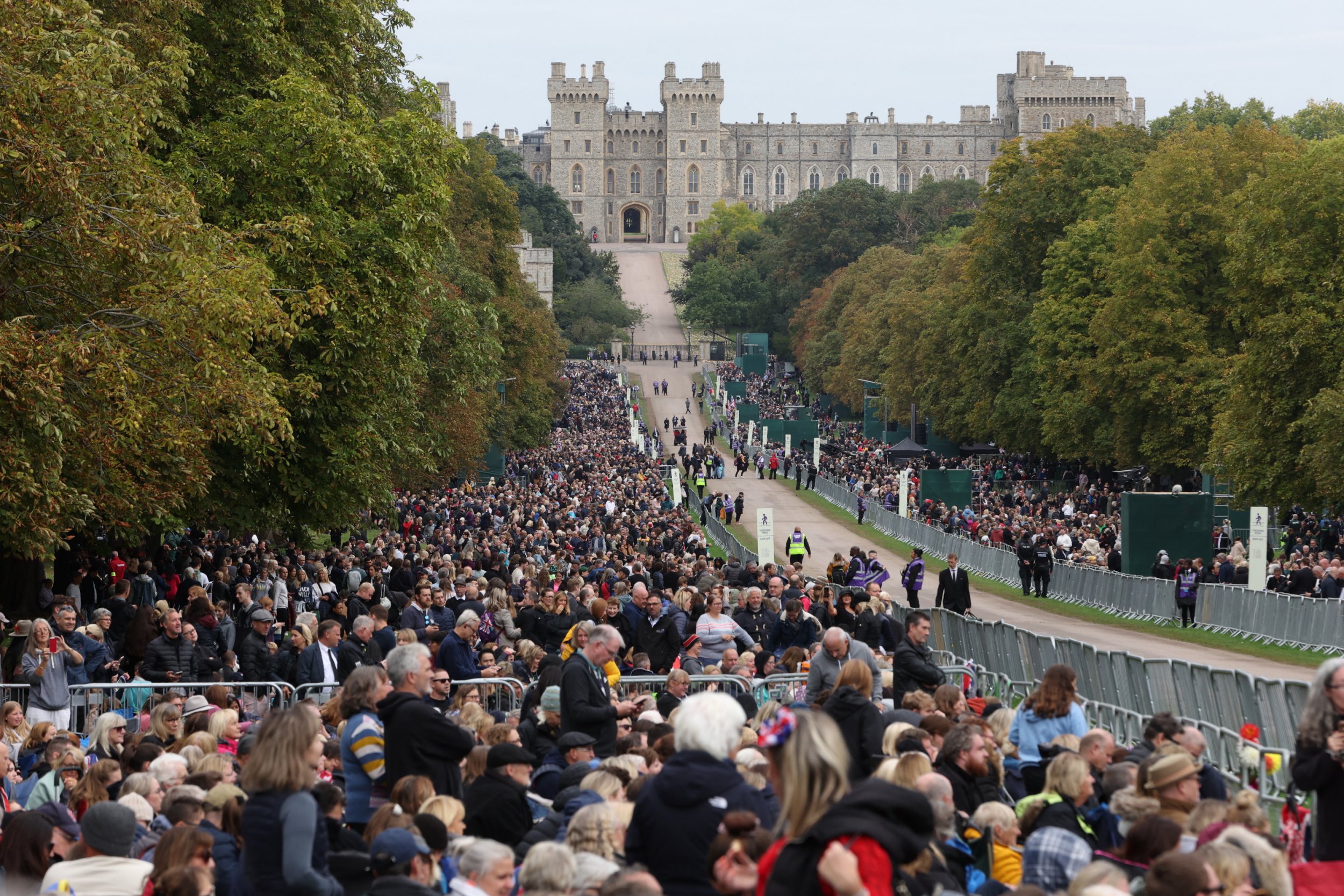 The UK has come to a stop on Bank Holiday Monday as mourning crowds gather to watch the final goodbye to the Queen.

Queen Elizabeth II’s coffin has arrived at Westminster Abbey for her historic state funeral, which saw a grand military procession accompanied by the Royal Family.

She was crowned in the church in 1953 and also married her late husband Prince Philip there in 1947.

Pictures show how the country has come to a standstill to watch the service, led by the Archbishop of Canterbury.

More than 2,000 guests are currently in the Abbey for the service, including world leaders, royalty, diplomats and volunteers.

‘But in all cases those who serve will be loved and remembered when those who cling to power and privileges are forgotten.

‘The grief of this day – felt not only by the late Queen’s family but all round the nation, Commonwealth and world – arises from her abundant life and loving service, now gone from us.

‘She was joyful, present to so many, touching a multitude of lives.’

The Queen’s children and grandchildren – and even great-grandchildren Prince George and Princess Charlotte – walked behind her coffin as it was brought to the front of the Abbey.

Concluding his sermon, the archbishop said: ‘We will all face the merciful judgment of God: we can all share the Queen’s hope which in life and death inspired her servant leadership.

‘Service in life, hope in death. All who follow the Queen’s example, and inspiration of trust and faith in God, can with her say: “We will meet again.”‘

His words, taken from the Vera Lynn wartime song, were a reflection of the Queen’s poignant words said during the Covid-19 pandemic when families and friends were separated by lockdowns.

Full schedule for the Queen’s funeral

6.30am: Lying-in-state at Westminster Hall will end.

8am: The doors to Westminster Abbey, where the funeral will be held, open three hours early to the 2,000 invitees.

10.35am: Her Majesty The Queen’s coffin will leave its current location of Westminster Hall, where HM is lying-in-state, and travel in the State Gun Carriage to Westminster Abbey.

A procession will lead through New Palace Yard, Parliament Square and Broad Sanctuary and the Sanctuary, before reaching the Abbey.

It will be led by King Charles, Princess Anne, Prince Andrew, Prince Edward along with Prince William and Prince Harry.

10.52am: The Queen’s coffin will arrive at Westminster Abbey.

11am: The Queen’s funeral will begin.

11.55am: The funeral will draw to a close with the sounds of the Last Post.

12pm: The UK will observe a two-minute silence at the end of The Queen’s funeral.

12.15pm: After the funeral, The Queen’s coffin will travel from Westminster Abbey to Wellington Arch near Hyde Park Corner, before continuing on to Windsor.

1pm: Just after this time, Her Majesty’s coffin will be moved from the State Gun Carriage to the State Hearse, and travel from London to Windsor on an as-yet unknown road.

3.15pm: Now in Windsor, the final procession to St George’s Chapel at Windsor Castle, via the Long Walk, begins at Shaw Farm Gate on Albert Road.

Once again, there will be a process of Royal Family members and The King behind the State Hearse.

4pm: The Queen’s coffin will be carried into St George’s Chapel, where a televised Committal Service will take place, held by the Dean of Windsor.

7.30pm: The Queen will be interred alongside Prince Philip at King George VI Memorial Chapel in Windsor Castle privately.

Today sees the finale of the national mourning period observed by the country as the beloved late monarch is finally laid to rest.

The world fell silent as it observed a two-minute silence in memory of Her Majesty.

Once the service is finished, the Royal Family will follow the Queen’s coffin as it is carried in another military procession to Wellington Arch.

The coffin will then be transferred to a hearse where it will be transported to St George’s Chapel in Windsor for a committal service.

The Queen will then be buried in a private ceremony with her family at 7.30pm.