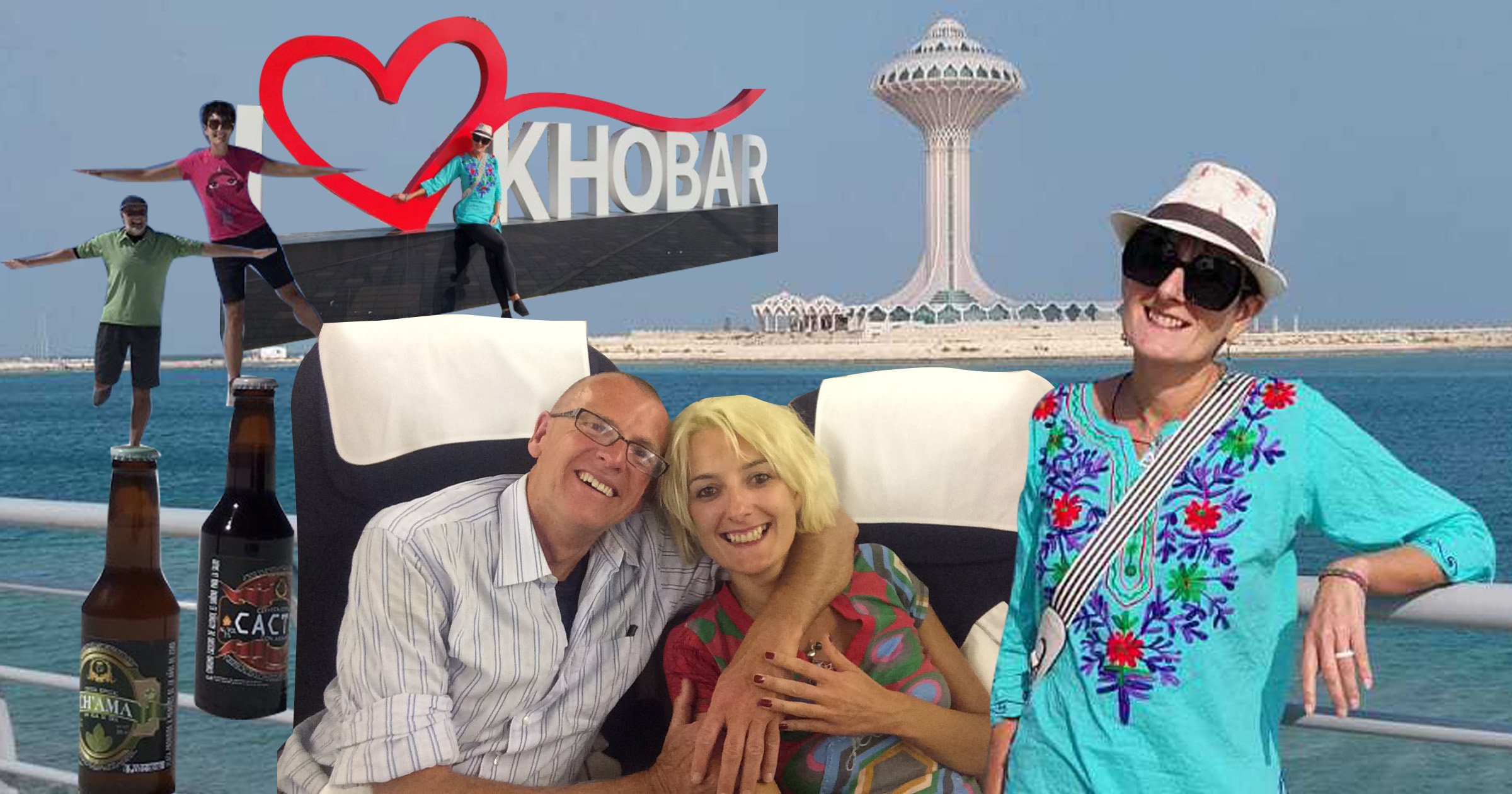 As they close in on their goal of visiting 1,500 airports, Alan and Agnieszka Forbes can add couchsurfing in Saudi Arabia to their list of travel experiences.

The couple, who also ‘collect’ Wetherspoon pubs, set off on a shoestring itinerary this week which includes crashing with strangers on a 5,500-mile round trip to India.

By the time they return home, Alan will have notched up 994 airports and Agnieszka 494 from their global travels to date. They are aiming to reach their targets of 1,000 and 500 respectively on a trip to New Orleans in early March — at which point they plan to stop counting.

If it sounds like the fancy of well-heeled retirees, their accommodation plans via a couchsurfing app suggest otherwise. En-route to India, Alan, 62, and Agnieszka, 44, stayed two nights this week with a host in Dammam before another in the Saudi capital Riyadh, with the locals putting them up for free.

They are due to arrive in Mumbai this morning as they continue to tick off airports, a pastime that has taken them to some of the most remote and exotic locations in the world.

‘My kids think we’re bonkers going couchsurfing at our age but it’s a great way to meet other people from around the world,’ Alan said. ‘It’s a bit like Airbnb but you don‘t pay anything, and we hosted our first guest at our home in Surrey on January 1.

‘Sometimes you get your own room but other times you literally stay on the couch.

‘The idea is not to stay somewhere for free, because in many places we visit you can get a hotel relatively cheapily, but to meet people and experience the local culture.

‘We are still in our 20s in our heads and we feel young at heart. we love to travel and we’ve both worked in the luxury, deluxe end of the market and stayed in five-star resorts for nothing.

‘We still travel as we did, which in my case was 40 years ago, and it’s really about meeting local people and finding out what life is like in places you’ve never been to before.

‘Both our hosts in Saudi Arabia were incredibly welcoming, they showed us around their respective cities and treated us to some fabulous food, they refused to let us pay for anything.’

The couple, from Woldingham, set off from Gatwick to Vienna on Monday, paying £8.77 each for a one-way flight and £35 for a hotel before flying to the Saudi city of Dammam the next day.

After a 500-mile journey in a rental car they took off from Riyadh yesterday en-route to Mumbai via Kuwait.

The month-long trip, which takes in Abu Dhabi, Tel Aviv and Kraków on the way home, will cost them less than £1,000 overall after they found budget flights and accommodation.

While they are in southern India, Alan will be adding six new airports to his list and Agnieszka seven —before she also adds the Israeli stop to her tally.

The former travel industry workers are also planning a couple of weeks in Morocco before March to take them up to 999 and 499 respectively.

They then plan to jet to New Orleans using Avios flight reward points for numbers 1,000 and 500.

1. The Man in the Moon, Newport, Isle of Wight

5. The Chief of Justice, Keswick

‘But it’s really about the journey along the way. We went to India three years ago and absolutely loved it, so we’re going to concentrate on the south this time, going back to Goa and down to the southernmost tip.

‘It’s a fantastic country to travel round, it’s warm, dry and cheap.

‘We are meeting up with a couple we met in Turkey who are going to be our guides to Mumbai.’

The keen hikers have also visited 822 Wetherspoons and find exploring new parts of the UK on the chain’s map just as exciting as far-flung adventures.

Wanderlust was always bound to become something of a preoccupation for the couple, who met a decade ago and married in June 2021.

Alan, who has three children and one grandchild, worked for an airline after leaving school before becoming a partner in a travel company.

He then took on a number of part-time jobs including as a dog walker, an airport baggage handler and working with autistic adults. Agnieszka, who is originally from Poland, worked for a five-star Caribbean hotel chain as director of sales for Europe.

Alan began crossing off airports more than four decades ago before Agnieszka joined him in 2012.

The experience collectors gave up work four years ago, since when they have regarded travel as a full-time pursuit. Their list of memorable airports includes a mountainous location in Mestia, Georgia, and a hub at Potosi in Bolivia, which was formerly the highest commercial facility in the world.

Another highlight is a facility with a 798-metre strip on the beautiful Greek island of Kastellorizo.

Travel pursuits at home include a National Trails collection, with the couple having completed 15 walks in England and Wales amounting to 2,000 miles.

Alan, who has written an unpublished book about his travels entitled But I Digress, is eyeing a low-key celebration this year as he finally shakes off his airport obsession.

‘We hope we’ll be celebrating on the plane with a glass of champagne,’ he said.

‘We won’t be overwhelmed, it will just be that that particular obsession will be satiated.

‘It will be a low-key thing, and we’ll keep travelling, we just won’t be counting any more.’

The seasoned travellers are conscious of the cost of living crisis but estimate that their long-haul adventures work out far cheaper than package holidays to the same destinations.

‘We try to avoid expensive countries in general and while we have couchsurfed in America before, the trip to New Orleans will be a treat for us,’ Alan said. ‘If you don’t have commitments at home, it can be a lot cheaper to winter abroad, as a lot of British people do in Goa.

‘We just want to travel while we can and do it on a budget. If we have to go back to work next year then so be it but for now we are just enjoying our freedom while it lasts.’

King Charles ‘unlikely’ to strip Harry and Meghan of their titles