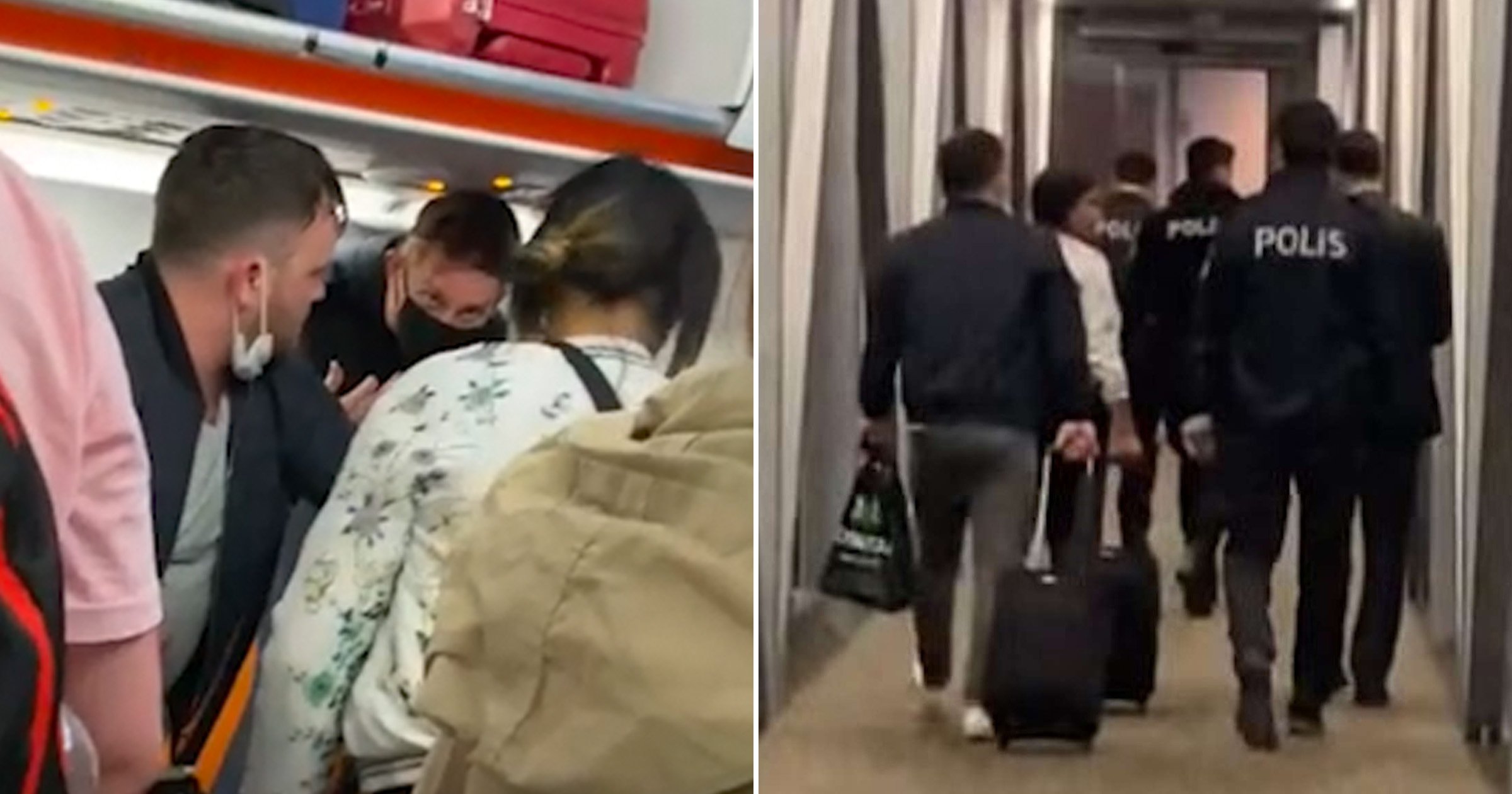 Two passengers had to be escorted off a plane by police after they shouted and threatened other travellers.

The shocking incident took place on an easyJet flight from London Luton to Bodrum in Turkey last month.

Footage of the altercation shows a man and a woman leaning over the seats and coming to blows with their neighbours.

The incident was filmed by another passenger who said the heated confrontation left children ‘screaming in fear’.

Video footage shows the couple confronting two passengers sitting in the row behind them who appear to be attempting to reason with the pair.

‘Go on then, say it again, say what you were going to say to me! Nothing.’

Another clip shows Turkish police boarding the aircraft and appearing to inspect the couple’s passports before they are escorted off the plane.

The passenger, who wished to remain anonymous, said the pair ‘argued the whole flight’ and when the cabin crew asked them to stop they were met with physical threats.

‘An air hostess asked them to calm down and she threatened to smash her teeth in and sort her out once off the plane,’ they said.

‘Then it was quiet for 10-minutes and she started swearing and screaming just non-stop.

‘The people behind her politely asked her to stop and leave her partner alone because he wasn’t doing anything, just sleeping.

‘She went mad and then the partner joined in and they argued against the other couple together and fell back in love for a few minutes.

‘They high fived each other and she said “let’s go get arrested in Turkey together babes”.

‘Kids were screaming in fear because she was so loud!’

The anonymous passenger said when the plane landed, all those on board were forced to wait while police boarded the aircraft.

They said they were later informed the disruptive couple had been banned from the airline.

A message sent to passengers reportedly read: ‘The passengers have been authorised a ban from the security manager.

‘[The female] is receiving a five-year ban and [the male] a two-year ban.’

A spokesperson for easyJet said confirmed the flight was met by police when it landed in Turkey.

‘We can confirm that flight EZY2233 from London Luton to Bodrum on 18 April was met by police on arrival as a result of two passengers on board behaving disruptively,’ they said.

‘The passengers were removed by the police.

‘easyJet’s cabin crew are trained to assess and evaluate all situations and to act quickly and appropriately to ensure that the safety of the flight and other passengers is not compromised at any time.

‘Whilst such incidents are rare, we take them very seriously and do not tolerate abusive or threatening behaviour onboard.

‘The safety and wellbeing of customers and crew is our highest priority.’

COVID-19: Call for more frontline workers to help with ‘year of growth and renewal’