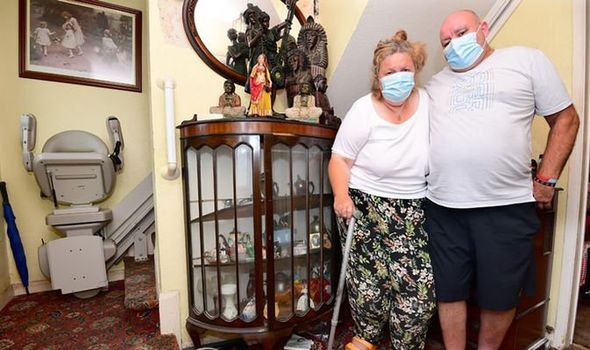 Jean and George Price have been left “disorientated” after their stairlift stop working on Sunday. Their daughter Lisa says the couple have been “shunted” to three different hotels since then by their housing association, but they’re now back at home sleeping in their living room.

Jean, 63, has various mobility problems and 68-year-old George has dementia, ill health from a heart attack and is due to start cancer treatment next week.

And Lisa is growing increasingly concerned for their welfare.

Speaking to Liverpool Echo, she said: “I’m at a loss with it all and I don’t know what to do to help them.

“They’re stuck in the house, they haven’t had a shower or a toilet, only use of a commode and they slept in a chair all night.

“This isn’t doing my dad any good, he’s got cancer treatment starting next week and my mum suffers with her mental health. I’m really worried about them.”

Lisa says the family’s problems first began around two weeks ago when the stairlift started accelerating suddenly, on one occasion propelling her mum suddenly from the chair.

She says at the time, the landlord of her property, Magenta, had logged a repair as non-urgent, and while the couple were waiting for an engineer to come out to take a look, on the morning of Sunday, August 15, the lift stopped working completely.

Lisa said: “It must have been about seven in the morning and we were due to go to Llandudno but we had to cancel the trip and wait for the engineer to come out.

“He came in the afternoon and took a look and couldn’t repair it so Magenta arranged for my mum and dad to go to a hotel in Chester.”

On Monday, Lisa said Magenta told the couple they would need to move to a different hotel in Birkenhead, Merseyside.

But Lisa claims that when a taxi booked by the housing association arrived to move Jean and George, the driver was unable to fit Jean’s wheelchair into the vehicle, resulting in the couple being forced to travel by bus from Chester to Birkenhead.

On Tuesday the couple were moved again, this time to Cheshire Oaks, while an engineer was called out to repair the stairlift at their home in Eastham, Merseyside.

She says that despite the engineer working on the lift all afternoon, it was later condemned and the couple were told the stairlift – which Lisa believes was fitted through the housing association, which was formerly Wirral Partnership Homes – would have to be replaced.

Lisa says it was at this point things took a more worrying turn.

She claims Magenta told her parents they would need to apply for a grant in order to repair the stairlift – which the housing association had been paying maintenance and insurance costs for – and if they were successful it could take eight weeks or more for a new one to be fitted.

Lisa claims Magenta offered the couple a bungalow several miles away in Birkenhead and when they refused told Jean and George another option would be a care home, which left her parents “distraught.”

She said: “When they suggested the bungalow or the care home, my mum was distraught.

“They said they’d send someone to move all their stuff but due to my mum’s mental health issues she won’t have anyone touching their stuff.

“My mum and dad won’t have it, they just want the stairlift in their house.”

She says Magenta suggested yesterday the couple could have their beds brought downstairs and use the commode in the meantime but Lisa says this leaves her parents without their dignity or basic access to hygiene.

Lisa said: “My mum needs to make use of a shower regularly, she’s got a big medical bed as well, it’s not so simple.

“We just want Magenta to sort it out – a hotel would be better while they get it fixed.

“Eight weeks is a long time and all this stress is not good for my dad with his treatment starting next week.

“I’ve had to take time off work, it’s all just so unsettling and upsetting for the sake of a stairlift that would enable them to stay in their home of so many years.”