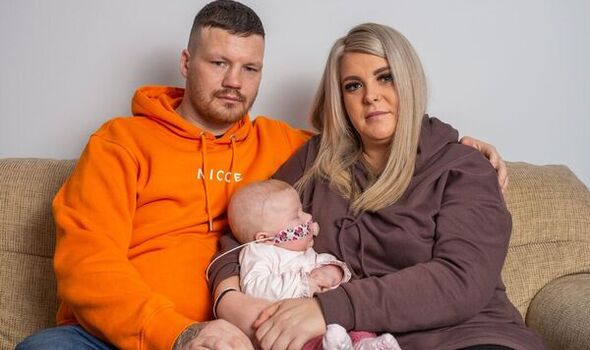 The CAR T-cell therapy is fourmonth-old Wendie Lou’s only chance of beating the disease, say Sammie Jo Smith and her partner Gavin, 36.

Sammie Jo, 30, said: “We have to fight for her and to stay strong. We can’t loseWendie Lou.”

Her daughter was diagnosed with acute myeloid leukaemia at just 15 weeks old.

She was seen by a doctor after bruises appeared at six weeks but Sammie Jo claims she was initially told there was nothing to worry about.

Convinced there was something more seriously wrong, Sammie Jo, of Kidderminster, Worcs, took Wendie -Lou to Birmingham Children’s Hospital – where the couple heard the devastating diagnosis.

Sammie Jo said: “I had weeks of knowing instinctively that something wasn’t right with Wendie Lou. I couldn’t shake off the gut feeling, even though I tried to tell myself that the doctors must be right and she was OK.”

“If we hadn’t pushed for answers and taken her back to hospital then we would have lost her.”

Wendie Lou is having chemotherapy at the hospital, but a rare genetic mutation means it and a stem cell transplant are unlikely to work in the long term.

Sammie Jo said: “For Wendie Lou to be facing this is just so cruel. She started chemotherapy and then she got a virus which went on her lungs, so it’s already been really tough on her, but she’s a little fighter.”

Her sole chance of survival is pioneering CAR T-cell therapy in the US, in which the patient’s T-cells – a type of immune system cell – are altered in a laboratory setting so that they attack cancer cells.

They remain in the body for months after the treatment has been completed, resulting in long-term remission for some types of blood cancer. The family are fundraising for Wendie Lou to go to the US for treatment.

Sammie Jo said: “Because of her genetic mutation Wendie Lou will relapse, so this really is her only chance of true long-term survival.”

She previously faced heartbreak when she lost her 27-year-old sister Megan to cancer last year.

Megan was found to have stage four rectal cancer in 2019 after being at first diagnosed with Crohn’s disease and haemorrhoids. When it spread to her liver and lungs, doctors said chemotherapy was no longer effective.

Medics had given her just months to live but Megan survived until September 2021.

Sammie Jo said: “We aren’t going to lose this battle and we will do whatever it takes to save Wendie Lou. To donate to the fundraising, log on to their GoFundMe site.

Immunotherapy specialists collect a patient’s T-cells from their blood and make a small change to them in a laboratory.

After a few weeks these altered cells are put back into their body using a drip.

The change helps them recognise and target a specific protein on cancer cells, so they can attack them.

The therapy is a possible treatment for some types of leukaemia in the UK but not for acute myeloid leukaemia.

France says row with Washington over submarines still not resolved