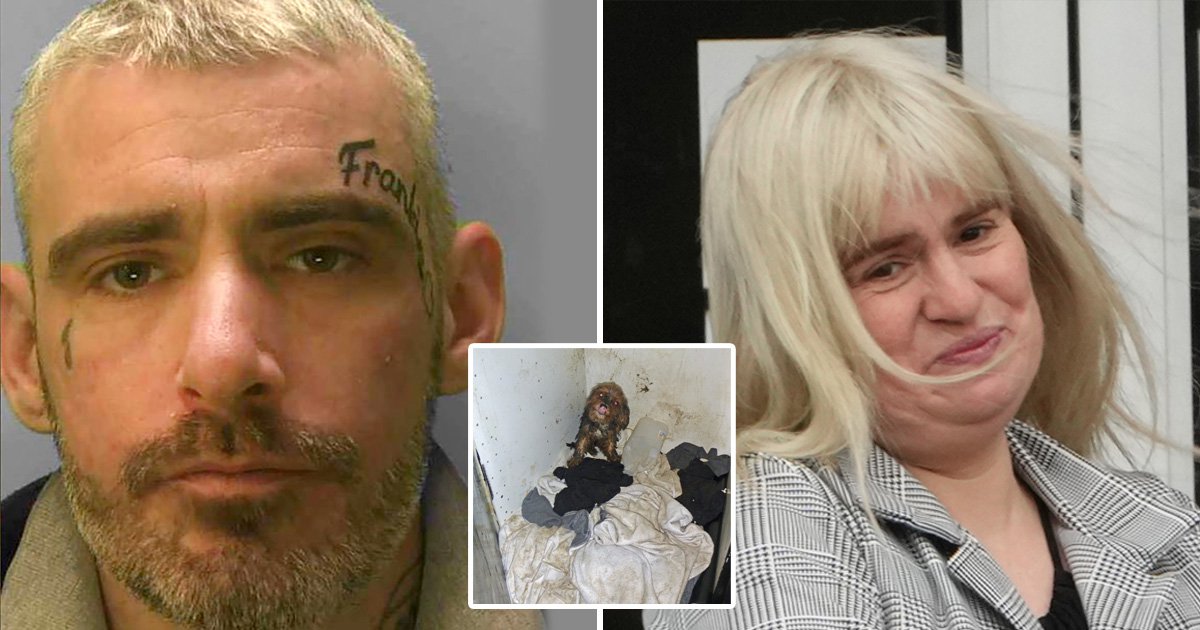 A couple who neglected seven children and 36 dogs they kept in a filthy three-bed house while ‘frittering away’ £84,000 a year in benefits have been jailed.

Christopher Bennett, 35, and Gemma Brogan, 41, were arrested after officers called to a domestic incident at their property in Eastbourne, Sussex, found the kids living in ‘shocking and repugnant’ conditions.

They later told a court how they were met with a ‘stench of faeces and urine’ leaving them ‘unable to breathe normally’ as well as a ‘deafening’ din coming from the dozens of malnourished dogs barking and leaping around.

The home was ‘strewn with discarded clothing, litter, rotting food and animal faeces’ with ‘little to no [edible] food’ in the cupboards.

A seven-year-old girl with matted hair was found asleep on a sofa wearing nothing but a soiled nappy, with dog faeces smeared on her skin and a dead dog nearby.

The children were immediately taken into care, where it was discovered that all had rotten teeth while the youngest ones lacked basic social skills and ‘did not know how to wash or brush their teeth’.

One had to be put under general anaesthetic to remove 13 dangerously decayed teeth, while another was only discovered to be blonde after its hair was washed several times.

A second girl was so weak that she was unsteady on her feet and acted ‘as if she had never had to interact with people outside her household before’, prosecutor Amy Packham told the court.

Ms Packham said: ‘Her speech was poor and she had disturbing eating habits. She appeared to hoard food and checked with amazement at food in the fridge.’

Another child had been forced to ‘look after the younger ones’ even though she couldn’t read or write and didn’t know the days of the week or the months of the year.

Bennett and Brogan had ‘discouraged her from going to school saying it would make her anxious and she would find it too hard’, Ms Packham added.

Meanwhile, they led a ‘toxic relationship’ marked with ‘volatile incidents’ such as the one which led officers to their house.

Bennett had called 999 himself and told the operator he was going to stab Brogan.

The couple’s ‘wilful’, ‘prolonged’ and ‘serious’ inflicted ‘serious psychological and developmental harm’ on all seven children, the court was told.

They pleaded guilty to seven counts of neglect against seven children in their care between September 2019 and June 2021.

Brogan had previously been running a dance school in Eastbourne but struggled to cope with a general anxiety disorder and Bennett coming ‘in and out of prison’, her defence team said.

Sentencing the pair to six years’ jail each, Judge Stephen Mooney told them: ‘You frittered away £7000-a-month which should have been spent on the children.

‘It is impossible for any person to comprehend the enormity of your failings.’

‘Whatever was going on in their relationship, they should have been looking after those children. How do you have 35 dogs, £7,000 [a month] in benefits, how is this allowed to happen?’

The couple had earlier been convicted for causing unnecessary suffering to the ‘extremely underweight’ dogs, who were ‘covered with each others’ faeces’ and had been allowed to interbreed.