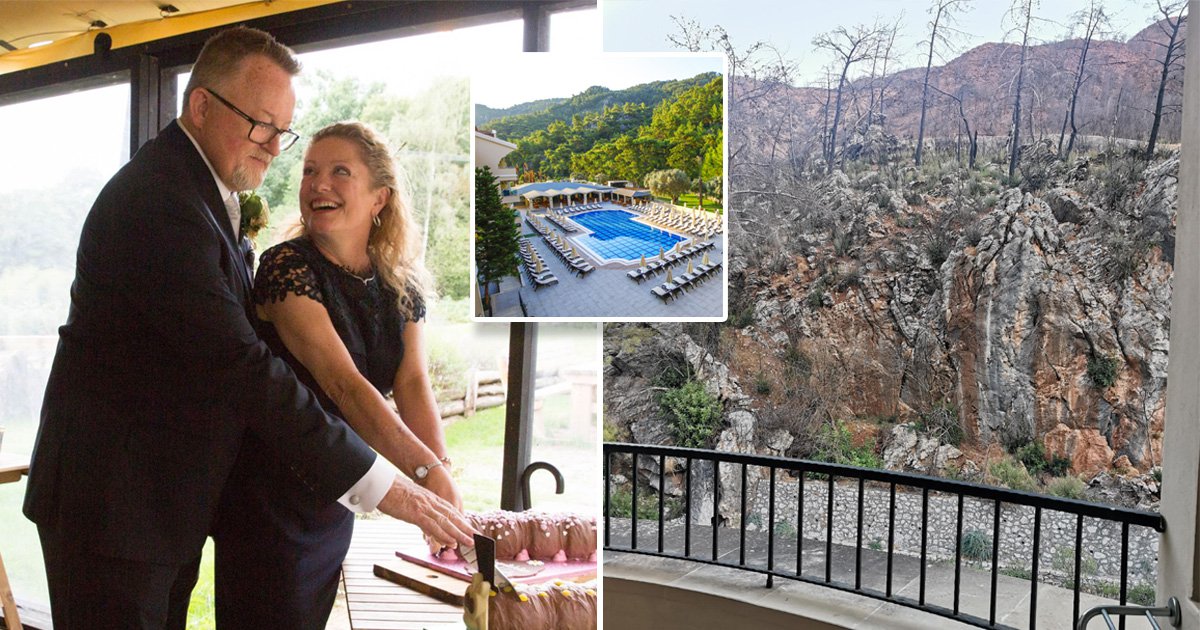 A honeymooning couple hoping to relax and unwind at a beautiful forest destination were greeted to the charred remains of a deadly wildfire.

Newlyweds Alecz Finch, 50, and Colin Finch, 60, booked the Julian Forest Suites, in Dalaman, Turkey, for their honeymoon specifically for the area’s lush green landscape, with the TUI website describing it as ‘fringed by deep-green mountains on three sides.’

But upon arrival, Alecz says she burst into tears when they were met with a ‘grim and barren’ burnt landscape that looked more like an ‘apocalyptic wasteland’ than the leafy paradise they were promised.

The foot care specialist claims a bar man informed her that the forest had been destroyed in the wildfires of September 2021, which decimated hectares of Mediterranean greenery and killed eight people.

Yet the outraged couple claim the websites of both TUI and Julian Hotels continue to advertise the hotel based on the former brilliance of the forest a year later – with no mention of the fire or destruction of the landscape.

To make matters worse, they claim that TUI initially refused to refund the couple after claiming the fire was an ‘act of god’-  despite it happening a year earlier and no warning being given to booking customers.

Alecz, from Midhurst, West Sussex, said: ‘We picked this hotel because of the forest – Colin has very celtic skin and I’ve lived in India for most of my adult life and I’m not supposed to be going in the sun anymore.

‘It was a massive shock when we got there – I opened the curtains in the room and looked out on a burnt landscape and I was so upset I just burst into tears. I couldn’t believe what I was seeing.

‘It’s just barren. It looks like the apocalypse has happened, there’s just nothing. There were no birds, foliage or flowers. It was grim.

‘That view was the same around the whole hotel. Colin just looked at me and said “what have we done?” We were so completely deflated.

‘When I went down to complain at reception no one really wanted to mention the forest fire, it was the bar man that told us about it while I was waiting for the manager to arrive.

‘It’s total misrepresentation. The forest does not exist as they are describing it and there’s nothing on the website to indicate that the forest isn’t there anymore.’

To make matters worse, the couple also claim they were struck down with a mystery illness that completely ruined the holiday.

The couple have vowed never to travel with TUI again after their ‘terrible’ experience.

Alecz said: ‘All of my patients have been asking how my honeymoon was and I sit there and try not to cry when I tell people what a terrible holiday we had.

‘I would never travel with TUI again. I don’t care if they give me a holiday, I’m not going and I would say to anyone booking a holiday with TUI, just don’t do it.

‘The general feeling I get from TUI is that you’re just a number and they don’t care. It’s like swatting away a mosquito.

‘To think I’m going to accept that this is an act of god a year after it happened is absolutely ludicrous.’

A spokesperson for TUI said: ‘We are so sorry to hear about Mr and Mrs Finchs’ experience on their honeymoon in Turkey, as we recognise it didn’t meet the standard they expected.

‘We do our best to ensure customers have the best possible holiday experience, and our teams are investigating the issues raised.

‘In recognition of their experience, we have provided them with a holiday voucher as a gesture of goodwill.

‘We have also provided Mr and Mrs Finch with the details of our legal team to make an illness claim.’

Spice Girls give Irish fans what they want – what they really, really want…