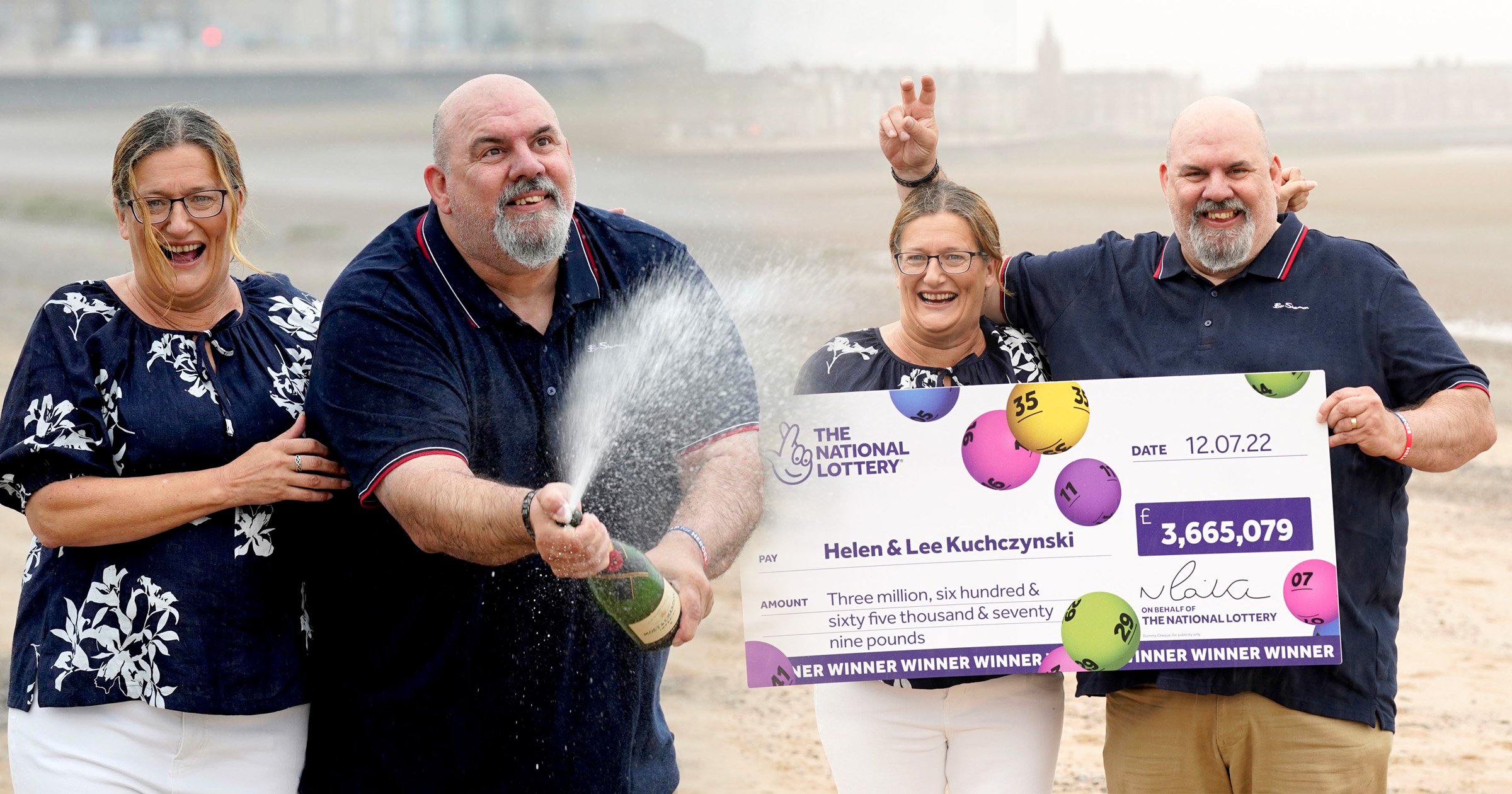 Cat litter and a backscratcher would probably not be top of your shopping list if you scooped £3.6million on the EuroMillions.

But they were the first purchases of lucky lorry driver Lee Kuchczynski, 52, and his 58-year-old wife Helen after they became multi-millionaires.

Asked about his first purchase after hearing he was a EuroMillions winner, Lee said: ‘I bought a new back scratcher because I snapped my other one at work so I bought an expensive one worth £17 instead of £8! The rest of the time we’ve just been sat there in a daze really.’

He was at the wheel of his HGV in Yorkshire when Helen rang to tell him they had become millionaires after matching five numbers and a Lucky Star.

Helen added: ‘My first purchase as a millionaire was two bags of cat litter while Lee invested in a new back-scratcher – not sure if that is living the high life!’

It wasn’t all bargain buys.

Instead of their usual Chinese takeaway treat, the Cumbrian couple have since splurged on a ‘whopping’ detached house and are marvelling at its electric gates.

After champagne and an oversized cheque to the beach to celebrate their windfall from the Tuesday July 12, Helen said: ‘Lady Luck more than smiled at us, she grinned and burst out laughing, so instead of the usual Chinese takeaway in front of the telly to celebrate my birthday, we bought a whopping detached house with all the mod cons – it even has electric gates.’

She added about her husband almost immediately quitting work: ‘Lee was medically discharged from the Army in 1995 and has been driving HGV’s since then. It’s tough work and long hours, and his health is not the best so when I shared our amazing news, his first words were, “Does that mean I can come home?” shortly followed by, “Does it mean I can retire?”

‘I was delighted to be able to say a big yes to both! He did his final job that afternoon and handed in his truck keys for the last time.’

Despite Lee’s retirement, Helen has decided to carry on working as a financial administrator but may reduce her hours.

The pair made an offer on a home on Helen’s 58th birthday after renting for their married life.

Helen bought a Lucky Dip for the EuroMillions draw after deciding to play the lottery more regularly than once a week.

She was alerted to her jackpot by an email from the National Lottery, but initially thought her balance was only 40p.

Helen added: ‘I logged into my account on the laptop but was disappointed to see the balance was the same as usual, 40p. I logged in with my app instead to see if that showed anything different, still 40p, so I then clicked on the message and the 40p was very quickly forgotten, and replaced with £3,665,079.10!’

Helen, who bought the winning EuroMillions Lucky Dip ticket online at national-lottery.co.uk, had a winning numbers line of 14, 18, 24, 25, 50 with a Lucky Star of 6.

The other Lucky Star in the draw was 11.

She won in a draw where the EuroMillions jackpot had reached its cap and can’t get any bigger.

With the jackpot at its cap, money that would have gone into boosting the jackpot is instead shared among players in the next prize tier.

The estimated prize for matching five main numbers and one Lucky Star is usually £130,554.30 – but Helen’s prize last Tuesday was boosted to an astonishing £3,600,000.

The win comes as another ticket holder claimed the highest ever lottery win of £195million earlier this week.

Only 15 UK players have ever won a jackpot of more than £100million, with the previous record-holders Joe and Jess Thwaite from Gloucester, who won £184million in May this year.