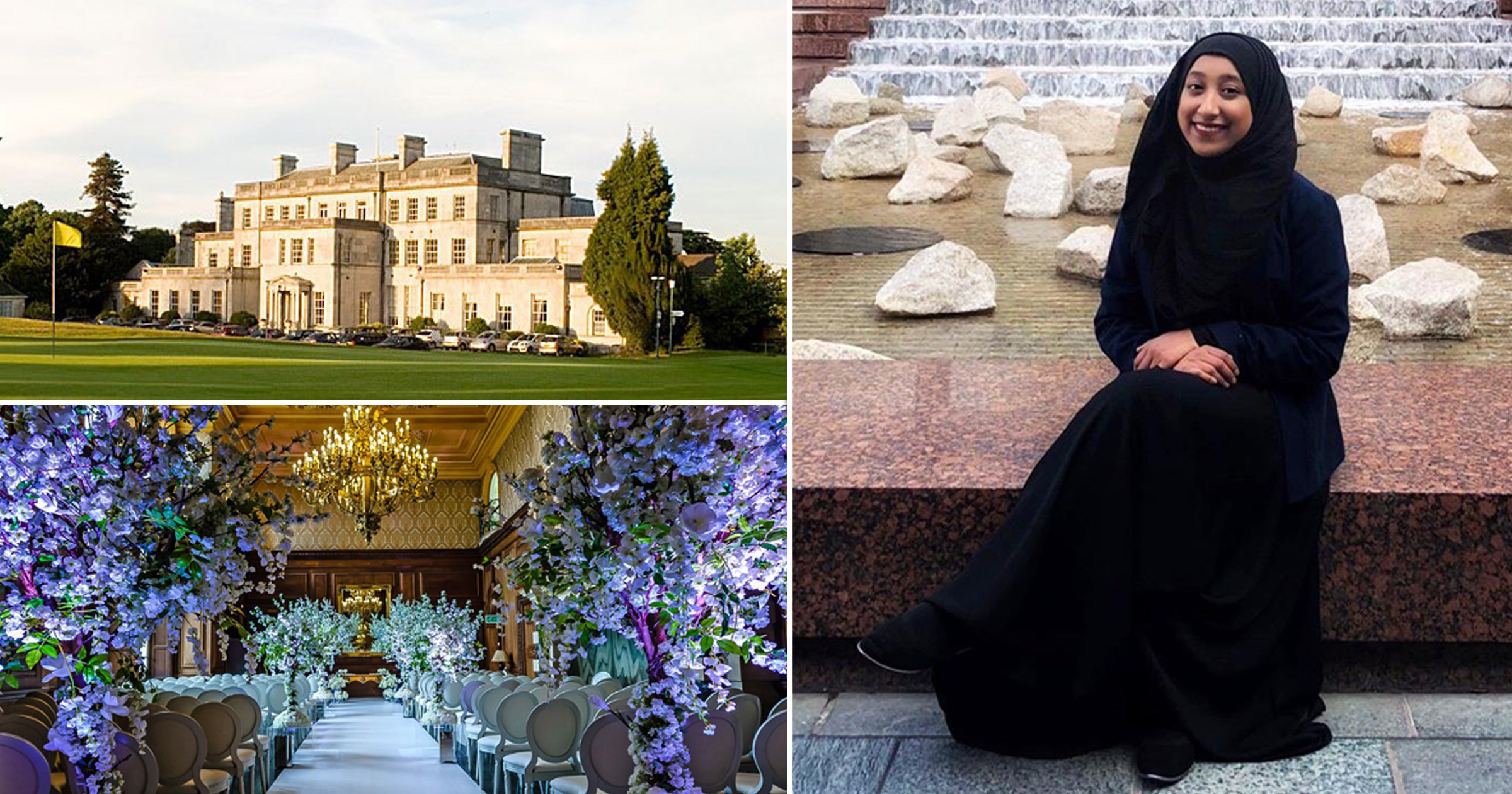 A failing wedding company which lost £740,000 of couples’ deposits repeatedly ignored official warnings by refusing to refund them.

Some 70 couples had paid deposits averaging £11,000 when organisers at Addington Palace, an 18th-century mansion set in a 160-acre estate near Croydon, went bust last month.

Many had booked weddings up to a year ago which could not go ahead due to Covid restrictions – and have been battling to get their money back ever since.

Sammy Ali, a 25-year-old digital media assistant from Kent, said the company’s behaviour ‘caused a lot of relationship stress’ and ‘fractured the relationship between my family and my future partner’s family’.

She asked during the first lockdown to push her August 2020 wedding back by a year but was told her new date could be ‘no later than December’.

‘They told us the 2021 calendar was not open for us. Then they said we could book a 2021 date if we cancel our contract and rebook again,’ she said.

‘Doing that would mean we’d forfeit our deposit. So actually it was open – for a price.’

Five couples told Metro.co.uk they first tried to postpone their big day but were forced to pick dates just a few months ahead, and follow the same payment plan with no inkling of whether they could take place.

Emails seen by Metro.co.uk reveal how Addington Palace warned those who tried to cancel they would lose their deposits, and threatened to sue them for any remaining instalments.

Government guidance saying people in their situation were entitled to refunds was brushed off as ‘not legally binding’.

Sammy rebooked for October to avoid losing her £9,500 deposit, and said she only pushed for a refund when it became clear lockdown measures were set to tighten again.

She backed down after receiving an ‘intimidating’ letter from Addington Palace’s legal team, but was not offered to postpone again until weeks before her new date.

‘That was when they started offering us 2021 dates free of charge,’ Sammy added. ‘I thought, why couldn’t they have done that months before?

‘We arranged a date in April but didn’t get any more information until February this year when I emailed them about the “roadmap out of lockdown” which Boris Johnson had just announced.

‘They replied saying they needed more clarification and would contact us shortly. I heard nothing until a few weeks later when we got a letter saying they were going into liquidation.’

Sammy has since split up from her fiancé and is now being treated for anxiety and depression.

Weddings have been banned for much of the past year, although ceremonies of 15 to 30 people were allowed during periods of lighter restrictions.

The company said it was ‘unable to maintain mounting debts caused by closure and lack of Government help’, but declined to explain the loss of hundreds of thousands of pounds paid for weddings which never happened.

The Grade II-listed mansion, which was home to six Archbishops of Canterbury in the 19th century and hosted the Queen and Prince Philip in 2002, is highly sought after for Asian weddings due to its large capacity.

Several couples said staff pushed them to accept scaled-down events despite having paid for hundreds of guests and wanting them there for cultural reasons.

Dusy Balasubramaniam, a 32-year-old accountant, said the company put him under ‘intense pressure’ to pay his full deposit of £11,800 by August even though his 750-person Hindu wedding in October could only go ahead with 15 guests.

He reluctantly accepted a postponement to March after the company refused to refund him, but heard no more until the liquidator’s letter revealed his money had vanished.

Roschany Edmund, 24, from Morden in south London, said her attempts to postpone her August wedding by a year were refused despite religious reasons ruling out any closer dates.

‘They initially offered dates up to December 2020. After months of back-and-forth they changed this to June 2021 but we couldn’t do any dates in that window.

‘We opened a court claim to get back the £5,000 we had already paid, after which they finally said they would give us the date we needed in August 2021 – but only if we paid the rest of our £11,000 deposit immediately.’

Roschany offered to pay up if her contract was amended to reflect the new date. She said the company refused and tried to sue her for the remaining £6,000.

Addington Palace, which only offered venue hire, told couples that terms in their contracts meant it did not have to refund them if they cancelled their date, and was not liable for cancellations forced by unforeseeable circumstances.

Government guidance published in September said contracts are ‘likely to have been frustrated’ if ‘the number of guests who can safely and lawfully attend the wedding is radically different to that agreed in the contract’.

Terms which ‘limit [a company’s] liability to refund customers whose weddings cannot go ahead’ in such circumstances are ‘unfair and unenforceable’, it added.

Another warning in November said wedding firms are likely to be breaking consumer law if they do not make full refunds on venue hire-only contracts.

A report obtained by Metro.co.uk shows the organisers were already struggling to make ends meet as early as June last year, yet did not seek professional help until nine months later.

The company, which was registered as Historic Houses Ltd but traded as Addington Palace, was found to have just £5,200 of assets to pay more than £1 million owed to creditors including the couples, HMRC and former employees.

It took insolvency specialists just days to decide that director Deniza Power needed to wind up her firm, according to the report.

An investigation by the liquidators, Begbies Traynor, could force Ms Power to pay couples from her own pocket or other companies if it finds money has been misused, or that she kept trading knowing her business was doomed.

Ms Power, 59, owns the palace via a separate company, Addington Palace Events Ltd, which is not affected by the liquidation. Accounts suggest the property is worth nearly £3 million.

Her husband John Power, 75, bought the lease on the palace for £1.1m from Croydon Council in 2005 via another firm which went bust in 2010 and sold the lease to his wife’s company for the same amount.

Legal disclosures last week revealed she ‘intends to carry on the business of the insolvent company, having purchased its assets’, and bought the rights to the Addington Palace trading name for £1,000 via a third firm, APEM (UK) Ltd.

Metro.co.uk shared the findings with Simon Renshaw, a licensed insolvency practitioner with rescue firm Company Debt, who said: ‘Clearly there’s some money somewhere, so I would hope the liquidator does a good job to recover it on the behalf of creditors.’

A spokesperson for Historic Houses Limited said it was ‘impossible to plan financially’ as ‘most customers [were] not willing to accept a smaller event or continued postponements’ and claimed many had been ‘withholding balance payments’.

‘We were unable to maintain the mounting debts caused by the closure and the lack of Government help afforded to our industry. Most of the support announced by the Government was not available to our business.’

The liquidator’s report confirms the company did not get any Government grants but did secure a £50,000 state-backed ‘Bounce Back’ loan.

The spokesperson added: ‘The [liquidation] decision was taken with a heavy heart after lengthy consideration of all other alternatives and exhaustion of all avenues. Due to the legal process now taking place, we cannot give our customers or the media any further information at this moment in time.’

Grandparents facing arrest 'prepared to do anything' at XR protests