Dozens of people have been arrested as protesters staged anti-lockdown demonstrations across England, with some police officers injured after being assaulted.

In Liverpool, 13 people were arrested as protesters moved around the city centre on Saturday afternoon, including a 36-year-old man who was detained on suspicion of assault of an emergency worker after an officer was pushed to the chest. Merseyside Police Chief Superintendent Ngaire Waine criticised the demonstrators, saying: “The vast majority of people in Merseyside have made huge sacrifices since March, missing weddings, funerals and family celebrations in an effort to halt the spread of coronavirus.

“So it will be incredibly frustrating for all those people to see that a minority of selfish individuals chose to flout laws brought in to protect the lives of people across Merseyside, putting our communities and themselves at risk.”

Chief Supt Waine said the sight of the protesters in the city centre “will alarm many who are now well aware of the risk large groups can pose to the spreading of this virus”. Officers introduced a dispersal zone in Liverpool city centre and will examine CCTV and bodycam footage to “identify offenders and bring them to justice”, she added.

The protests came on the day that a further 341 coronavirus deaths were announced in the UK, bringing the country’s total to 54,626.

Essex Police said 12 people have been arrested after protesters gathered in Basildon, with some officers reporting they were assaulted – although no one was seriously hurt.

Seven fines were issued and a dispersal order remains in place for the town centre until 12.30am on Sunday, according to the force. 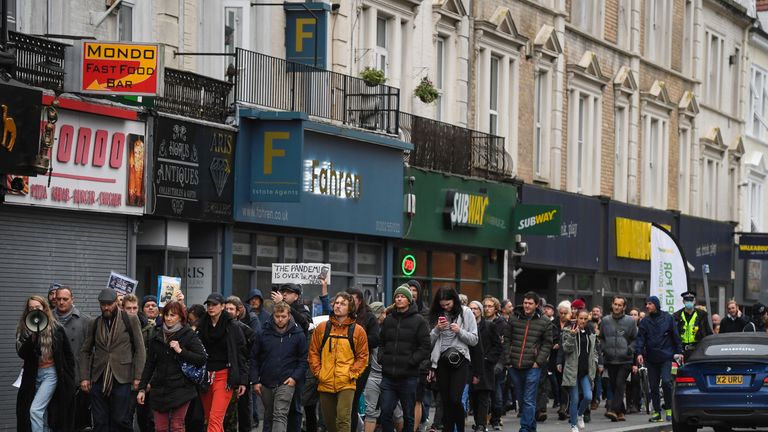 Superintendent Bonnie Moore said: “This was a clear and blatant breach of the government’s COVID-19 regulations and those who took part have risked their health and those of their loved ones through the spread of the virus.”

She added: “A number of our officers involved today also reported being injured but, thankfully, their injuries are relatively minor.

“Having to deal with clear and blatant breaches of the regulations means having to take our officers away from dealing with other incidents and affects our ability to respond to other forms of crime.”

Basildon Council leader Gavin Callaghan criticised the “idiotic protesters taking to our streets and causing trouble”, saying “police officers and their families have been put in totally avoidable danger”.

“I hope the ‘protesters’ have the book thrown at them,” he added. 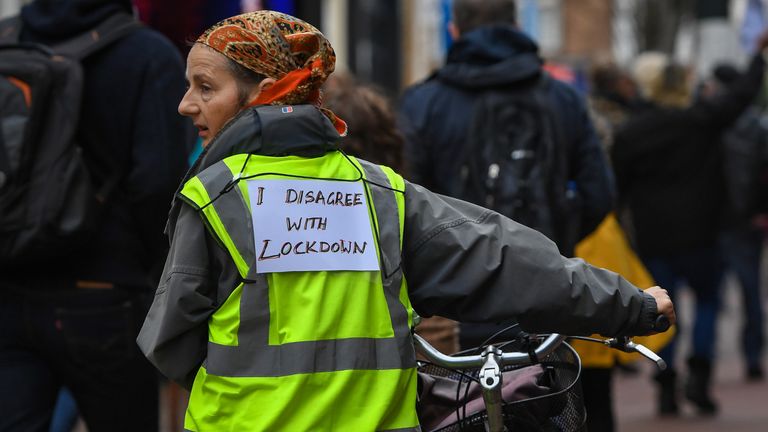 Superintendent Michael Walsh said: “We take reports of breaches of COVID-19 restrictions seriously. We are still in a pandemic and it is extremely selfish of a small minority of people to carry on without regard for the regulations.”

Meanwhile, two people were arrested in Bournemouth after around 100 demonstrators gathered in the seaside town.

Some of the protesters held signs saying “the pandemic is over” and criticising the lockdown.

Dorset Police said officers made “repeated attempts to engage with the organisers and discourage them from holding the event”. Two men were arrested on suspicion of breaching coronavirus regulations, according to the force.

Assistant Chief Constable Mark Callaghan said: “We must ensure that the law applies equally to everyone.

“We owe it to the vast majority of our communities who are complying with the regulations and doing their bit to limit the infection rate to take action against those who are reported to be ignoring the restrictions and encouraging others to do so.”