Home » Europe » COVID-19: Boris Johnson and Prince William among those celebrating the NHS with ceremony at St Paul’s Cathedral

The Duke of Cambridge, Prime Minister Boris Johnson and Labour leader Sir Keir Starmer are among those who have celebrated the 73rd anniversary of the NHS at a special thanksgiving ceremony.

Prince William was due to be joined by his wife, the Duchess of Cambridge, for the event at St Paul’s Cathedral, in London, but arrived alone after she was forced to self-isolate. 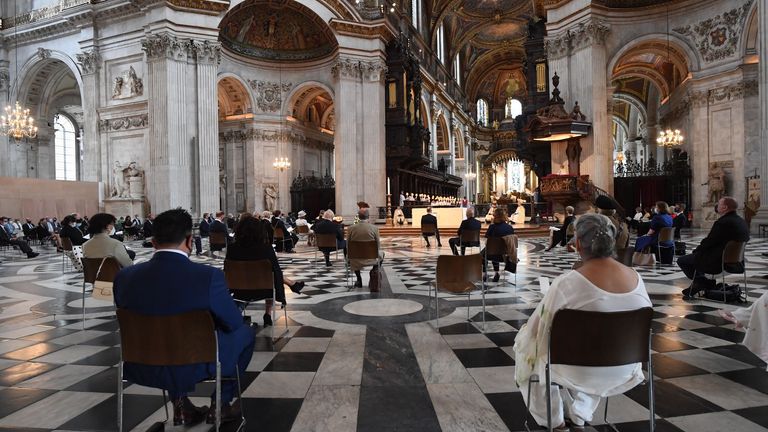 The Duke of Cambridge waved to crowds as his car pulled in and was greeted on the cathedral steps by the Lord Mayor of London.

As a choir, dressed in white robes sang hymns, William followed religious leaders past rows of NHS staff to take his seat in the front of the cathedral.

Prime Minister Boris Johnson was seated socially distanced from other guests including Sir Keir Starmer and Liberal Democrats leader Sir Ed Davey, who were seen speaking for a few minutes before taking their seats. 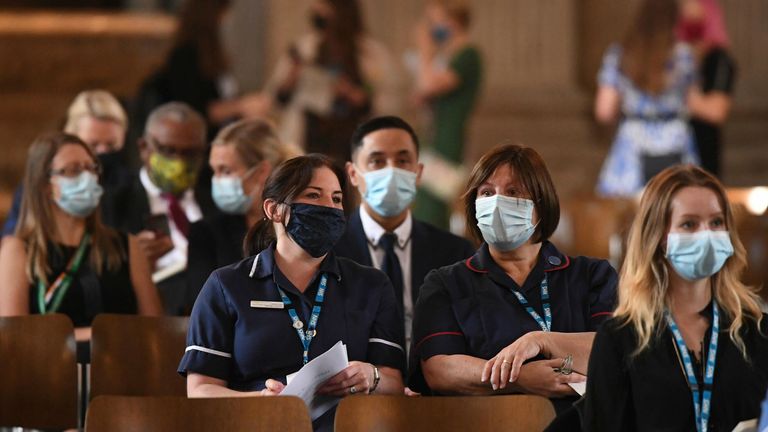 NHS staff, volunteers and carers sat in the rows behind for the service, which aimed to celebrate their contribution to the country during the COVID-19 pandemic.

Sir Simon Stevens addressed the congregation during the event, thanking health service staff who have “served so selflessly” throughout the pandemic, as well as “the care workers, the shop assistants, the bus drivers, the teachers and countless others on whom we as NHS staff ourselves depend”. 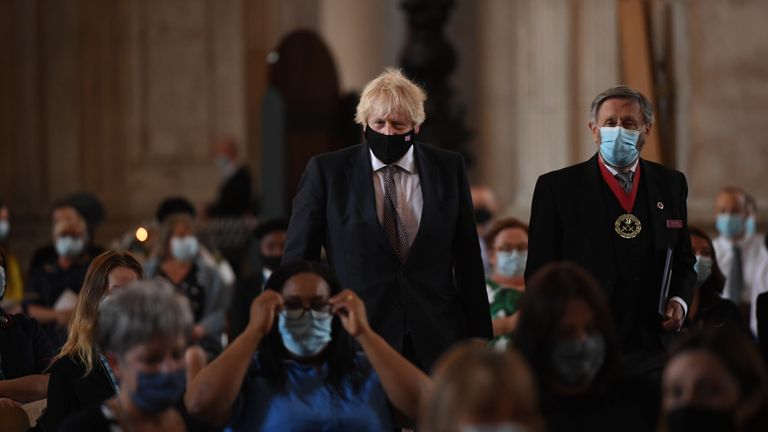 Sir Simon described the occasion as an opportunity for “cautious pride in science, treatments and our vaccines” – but also a time for some “anger and regret” over the millions who have died with coronavirus around the world.

Among the congregation at St Paul’s was Dr Ashley Price, who was part of the team that treated the UK’s first coronavirus patients at Newcastle’s Royal Victoria Infirmary.

“It was a very emotional thing dealing with people when we didn’t have the treatments and understanding that we have now,” he told Sky News.

“I remember speaking to those first families and just realising that was going to be the first of many, many calls made throughout the NHS to families about their sick loved ones.

“What that did was really to spur us on, to make sure that we find new treatments through research and get vaccines.” Dr Price gave a speech at the ceremony where he told guests he welcomes the final easing of restrictions on 19 July, but thinks masks will still be needed in some settings.

He said: “The news is looking good. We’re having fewer admissions to hospital and those that are coming in we’re generally able to treat.

“We do have to remember though that there are a lot of vulnerable people in our society – people for whom the vaccine may not have worked as well – and we need to be mindful of that.”

“I think, in places like hospitals, mask-wearing will need to continue for a bit longer because we are still contracting coronavirus and it’s possible to spread it to very vulnerable patients”, he added. 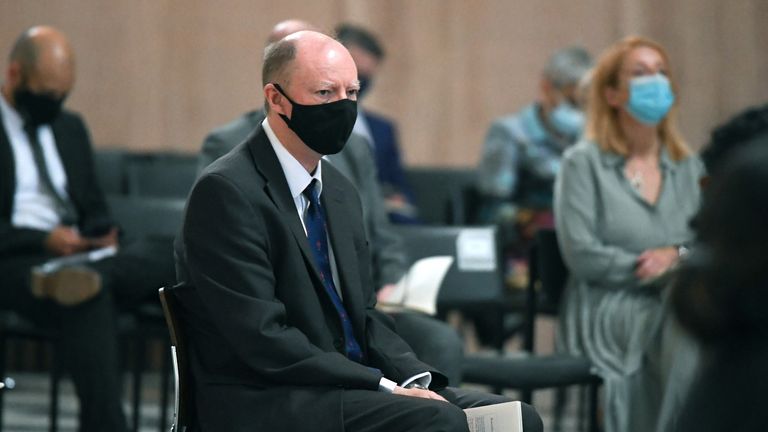 Earlier, the Queen awarded the George Cross to the NHS to recognise the work of all staff “past and present”.

In a handwritten message, Her Majesty said that staff have acted “with courage, compassion and dedication” for 73 years.