Home » Europe » COVID-19: British soldiers on rations as Kenya camp is locked down after coronavirus outbreak

Soldiers at a British military base in Kenya are being fed rations after they were placed in “enhanced isolation” following a COVID-19 outbreak.

Four people have tested positive for coronavirus in Nanyuki and 320 personnel have been put under isolation rules to limit contact and prevent further infections. 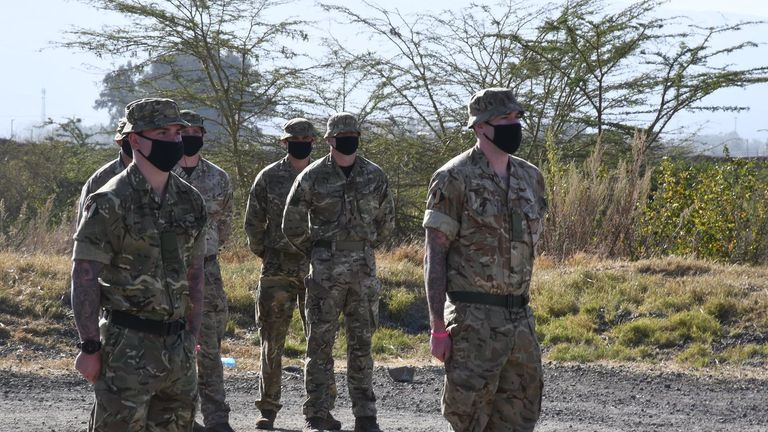 This includes some soldiers being required to sleep in tents or “bashering up”, a British Army spokesperson said.

They said that as part of the enhanced isolation Locally Employed Civilians (LECs) who work in ‘high transit areas’ (the kitchen, gym) have been asked to not come in to work to protect local communities.

The spokesperson said: “High transit areas are being deep cleaned and soldiers will be fed on rations in the meantime.”

They continued: “The BATUK (British Army Training Unit Kenya) camp has been placed into enhanced isolation after a very small number of soldiers tested positive for COVID-19.

“All soldiers deploying on exercise had to conduct a period of isolation and test negative prior to travelling to Kenya.

“The British Army takes the health and wellbeing of personnel and the local community in Kenya very seriously. The Ministry of Defence’s Force Health Protection measures are being applied to prevent further infections.”

The Army is following a number of procedures to prevent the spread of the virus during deployments.

Soldiers must isolate in barracks before they leave the UK and a negative PCR test is required 92 hours prior to deployment.

Upon arrival in Kenya, soldiers are transferred directly to the barracks and remain in their “flight households” for a mandatory six-day controlled acclimatisation and isolation period.

During this time they are asked about symptoms daily and have their temperature taken three times a day. Anyone with symptoms must isolate and take a PCR test.

The Army’s website says: “BATUK is a permanent training support unit based mainly in Nanyuki, 200km north of Nairobi, but with a small element in Nairobi.

“BATUK provides demanding training to exercising units preparing to deploy on operations or assume high-readiness tasks. BATUK consists of around 100 permanent staff and reinforcing short tour cohort of another 280 personnel.”