An extravagant Christmas lights display that generates charity donations has been switched off after a complaint that visitors were breaking COVID rules.

Dan and Mark Extance-Warr use scaffolding each year to turn their bungalow in Tintinhull, Somerset, into a winter wonderland featuring reindeer and illuminated turrets.

The couple have spent around £20,000 on decorations since starting the festive tradition four years ago as a way of raising money for charity. 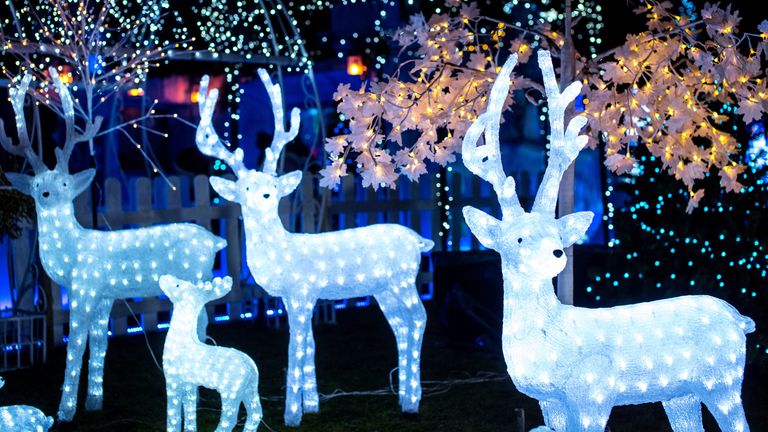 They said they have asked “time and time again” for people to stick to the rules when visiting the property, which sits in a Tier 2 area.

In a statement on their Facebook page posted on Sunday, they wrote: “We are sorry but we have had to turn the lights off, due to someone phoning the police about social distancing.

“We have asked this time and time again. We have also had a lot of people visiting from tier three areas.

“The police have said, we have manned the lights perfectly, but unfortunately a small amount have ruined it for everyone else.

“We will be off for a few days and will try again when we feel safe to do it.”

Avon and Somerset Police confirmed they were called about the display and a spokesman said “people running into hundreds” were “waiting to see them”, SomersetLive reported.

Dan and Mark told the website: “All we can say is that the display hasn’t been shut down by the police. They advised us to switch off last night because of the sheer amount of people it’s pulled in.”

Funds raised this year will go to the NHS, the local air ambulance, and several other causes.

Dan and Mark have set up a JustGiving page, which has so far raised more than £2,100.

‘Brexit has already happened!’ Blair savaged over plea for 12 month delay to avoid no deal