Distancing measures have forced shelters to limit capacity, leaving many homeless people vulnerable to harsh weather and other hardships. 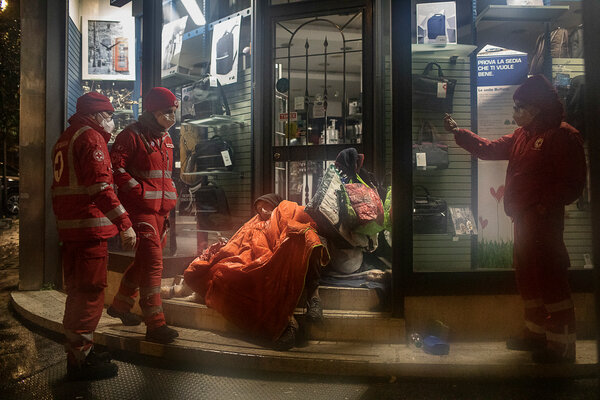 ROME — On an icy evening last month, Akas Kazi, a 35-year-old originally from Bangladesh, huddled under a blanket in the portico of one of Rome’s main post offices, as Red Cross volunteers distributed hot meals of pasta and tea.

Working in a restaurant kitchen had barely paid the bills, but after the restaurant closed six months ago — yet another casualty of the pandemic — Mr. Kazi found himself living on the street. “No work, no money for rent,” he said.

Job searches had been fruitless: “There’s nothing,” he said. And even sleeping on friends’ couches was not an option. “Everyone has problems because of Covid.”

The winter has been especially hard: Since November, 12 homeless people have died on the streets of Rome, where a growing number of people have ended up because of the coronavirus pandemic.

But even as the need increases, those in Rome who care for the homeless are challenged by restrictions put in place to keep people healthy, like those that require beds to be a certain distance apart.

Capacity at overnight shelters dropped sharply, and managing Rome’s so-called “cold strategy” for the winter months “was more complicated this year,” said Alberto Farneti, who runs a homeless assistance program for the Rome branch of the Catholic charity Caritas. 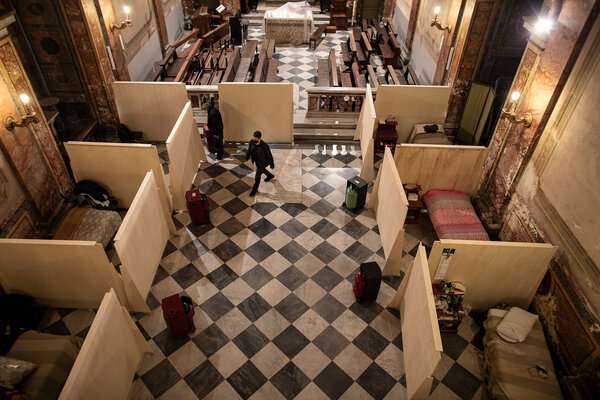 The 200 beds at his shelter at Rome’s Termini train station have dropped to 60. Many local parishes that once offered bunk beds in back rooms to the homeless during the coldest months are not doing so this year.

“It’s a question of protection,” said Marco Pavani, a volunteer at a shelter for older homeless men inside the Church of San Calisto, run by the Community of St. Egidio, a Catholic charity. Capacity there fell to 10 beds from 30, after wooden partitions were erected between the cots to ensure social distancing.

Numbers for Rome’s homeless population vary widely; Caritas estimates that some 7,700 people are on the streets. Some social workers put the number at almost twice that. For City Hall, “those are absurd numbers” and don’t reflect reality, said Veronica Mammì, the municipal councilor in charge of social services, who estimated the number of homeless at closer to 3,000.