Home » Europe » COVID-19: Face masks set to become ‘personal choice’ – but some medical experts may continue to wear them

Wearing a face mask is set to become a “personal choice” – but some medical experts say they will continue to wear them in crowded environments.

Speaking to Sky News on Monday, Health Minister Helen Whately said she “can’t wait to not have to wear a mask” when the restrictions allow.

But medical director of NHS England Professor Stephen Powis said he “might choose” to continue to wear a face covering “in a crowded, indoor environment”. 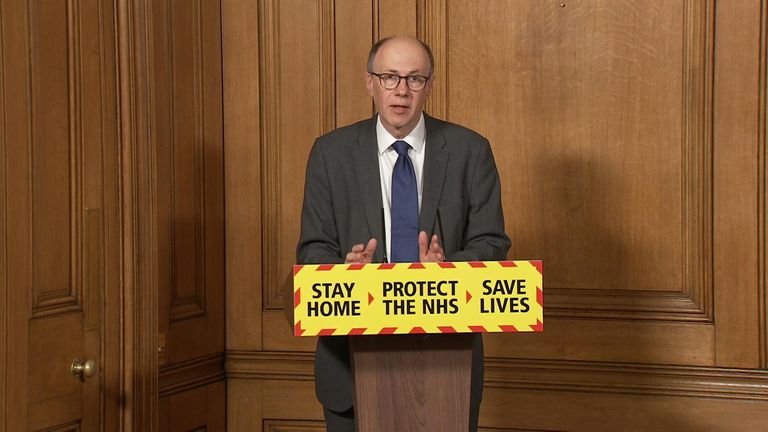 Prime Minister Boris Johnson is set to reveal the next steps around face coverings, working from home and the one-metre plus rule in a Downing Street news conference at 5pm.

Ms Whately said the country is “on track” to move to step four of the government’s roadmap on 19 July and from this point, people will be asked to “make a common sense judgement” about issues such as wearing face masks.

“We are going to be asking people much more to take personal responsibility for choices like that,” she told Sky News.

“I know, like many others, I can’t wait to not have to wear a mask, but I will be cautious and try and make the right judgements and follow guidance on this.

“I can’t pre-empt the detail of what is going to be said later today, but overall what I can say is we are going to be shifting much more to an approach of where there is guidance but you take a personal responsibility, you make a common sense judgment about what is the right thing to do to protect yourself and others.”

Her comments came after Housing Secretary Robert Jenrick told Sky’s Trevor Phillips On Sunday that measures such as the wearing of face coverings will become a matter of “personal choice” after 19 July.

Newspaper reports over the weekend suggested mask wearing will become voluntary in all settings.

However, medical experts have been worried over plans to ditch restrictions, with high-profile doctors calling for the use of face masks and social-distancing to remain in place.

The British Medical Association had pleaded with the government to keep some of the measures beyond any reopening, including the use of masks in areas such as shops and public transport.

The BMA council’s chair, Dr Chaand Nagpaul, said the BMA was not asking for the reopening to be delayed but it wanted “targeted measures” to help prevent virus transmission.

These include face masks in public areas such as shops and public transport, and better public messaging about the importance of social distancing and ventilation.

Calum Semple, a member of the Scientific Advisory Group for Emergencies (Sage), told Sky News he may continue to wear a mask after 19 July.

“I probably will in some settings, but it’s got to be remembered that the mask-wearing is primarily to stop transmission rather than acquisition, so it’s people that have got symptoms, who should really be staying at home, that are going to be the risk here, rather than the people walking around who are double-vaccinated – they’re far less at risk,” he said.

“I might choose to wear a mask, as you’ve heard from Calum (Semple), in a crowded, indoor environment,” he told Sky News.

“If it avoids rising cases, people getting ill, another lockdown and helps businesses stay open, doesn’t it make sense to keep face masks for indoor settings like shops and public transport, until we understand more about vaccine effectiveness in stopping transmission?” she said in a tweet.

“I understand people not wanting to wear masks but it’s a minor inconvenience that we know helps to slow the spread of the Coronavirus – and gives people a level of reassurance, especially the vulnerable,” he said in a social media post.

“You wouldn’t want your surgeon to take their mask off would you?”

Meanwhile the trade union Unite, which represents tens of thousands of public transport workers, has warned that mask wearing should remain compulsory on public transport.