Police officers say they “deeply regret” the upset caused by shutting down a Good Friday church service after alleged breaches of coronavirus rules.

Two Metropolitan Police officers attended a service at Christ the King in Balham, south London, on Sunday to address worshippers about the incident.

Officers had halted the Friday service when they found some worshippers breaching social-distancing guidelines and not wearing masks, according to the force.

In a letter to parishioners on its website, the Polish Catholic church responded at the time by saying police had exceeded their powers and that all coronavirus requirements were met. 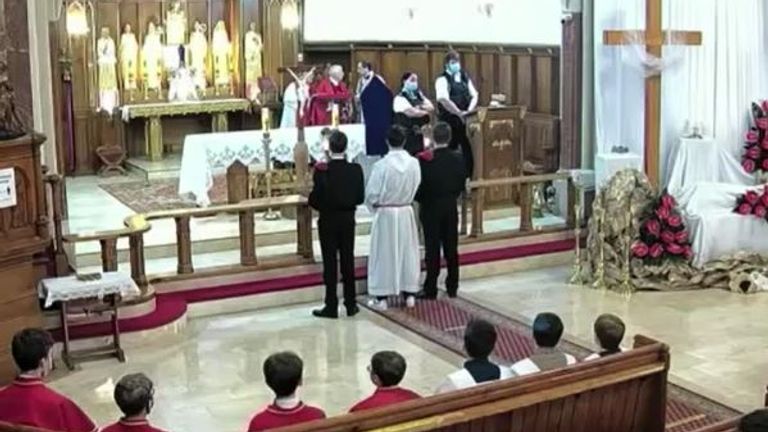 Detective Supt Wadey said there had been “significant reflection and learning” by members of the force and New Scotland Yard since the incident.

He said: “The intention of the Met is to protect and support communities in staying safe during the pandemic.

“We know, however, that many people were very upset by what happened on Good Friday and we deeply regret that.

“Since then, there has been significant reflection and learning by me, Roger, our colleagues who work with us locally and also, senior leaders at New Scotland Yard.

“The Metropolitan Police truly wishes to serve and protect you in the very best possible way.

“I truly hope that today marks the start of a renewed, deep and lasting relationship with the parish of Christ the King Balham and also the wider Polish communities.”

In a response posted on the church’s website, priest Wladyslaw Wyszacjki said the interruption to the Good Friday service was “very painful for our parish”, but thanked the officers for attending.

He said: “The interruption of the Good Friday liturgy was very painful for our parish community, but in the spirit of the Gospel, we willingly extend our hand to the representatives of the police authorities in order to further build a deep and lasting relationship between us, based on mutual respect and regard for the rights of worshippers to freely practice their faith.”

The church said worshippers obeyed police orders during the shutdown, and the Met said no fixed penalty notices were issued.

From 8 March, places of worship in England were allowed to open for communal prayer, and limits to congregation sizes were dependent on the capacity of the establishment.