Another 21,672 coronavirus cases and 424 deaths have been recorded in the UK in the past 24 hours, according to government figures.

Meanwhile, a further 275 people who tested positive for the virus have died in hospital in England, bringing the total number of confirmed deaths reported in hospitals to 43,812, NHS England said on Friday.

Patients were aged between 34 and 99. All except eight, aged between 60 and 95, had known underlying health conditions.

The deaths were between 1 November and 10 December. Fifteen other deaths were reported with no positive COVID-19 test result.

And there were a further 2,234 cases of coronavirus in Wales, taking the total number of confirmed cases to 98,232.

Public Health Wales reported another 29 deaths, taking the total there since the start of the pandemic to 2,818.

It comes as figures show the UK’s R number has risen slightly to between 0.9 and 1. 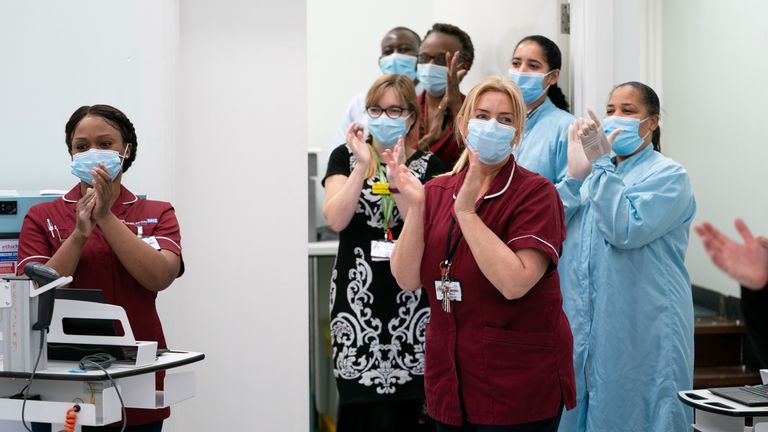 R represents the average number of people each person with COVID-19 goes on to infect.

Last week, the estimated R number was between 0.8 and 1 in the UK – its lowest level since August.

A figure of below 1 means the outbreak isn’t growing, but the Scientific Advisory Group for Emergencies (SAGE) said it is not confident this is the case in all English regions, particularly in London and parts of the South East.

The latest data from the Office for National Statistics suggested the proportion of people testing positive for COVID-19 is estimated to have increased in London and possibly in eastern England but decreased in all other regions.

Increased infection rates have led to fears the capital could be headed for Tier 3 restrictions.

The capital had the highest average infection rate in the country – 191.8 per 100,000 people – for the week of 30 November to 6 December, according to the weekly surveillance survey by Public Health England.

A decision will be taken on 16 December and details published the day after. A possible tier change would come into force from 19 December.

Why Dutch fear no deal will leave onions to rot