The UK has recorded another 27,334 coronavirus cases and nine related deaths, according to the latest government figures.

This compares with the 24,248 COVID cases and 15 deaths recorded on Sunday, and 22,868 cases and three deaths on Monday last week.

This means that 67.6% of the total population has received a single shot, and 50.3% is fully inoculated.

In early April, vaccination rates dropped as India slowed down exports due to the rise in cases there.

Boris Johnson is today set to reveal how he plans to “restore people’s freedoms” in England at a news conference this evening, as the UK reaches the final stage of the roadmap out of lockdown.

Restrictions are set to be eased on 19 July, and Downing Street said it is giving a conference this week to give people and businesses more time to prepare.

Step four of the prime minister’s COVID-19 roadmap was delayed by a month in June, as case numbers began to rise again, giving every adult in England the chance to get vaccinated.

The government said it will not know if its four tests (an effective vaccine programme, evidence the vaccines work, manageable infection rates and the low risk of variants) have been met until 12 July, a week before the proposed date to ease final restrictions.

Meanwhile, Wales health minister Eluned Morgan told a news conference “Boris Johnson will do what he thinks is right for England and we will do what’s right for us here in Wales”. 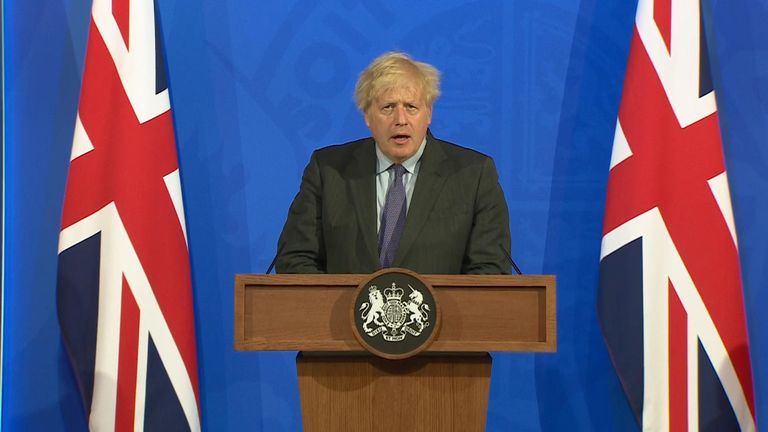 She added the government hopes to make an announcement on easing restrictions, like requirements for wearing face masks, next Wednesday.

Earlier on Monday, health minister Helen Whately told Sky News the country is “on track to take that final fourth stage of the roadmap on 19 July”.