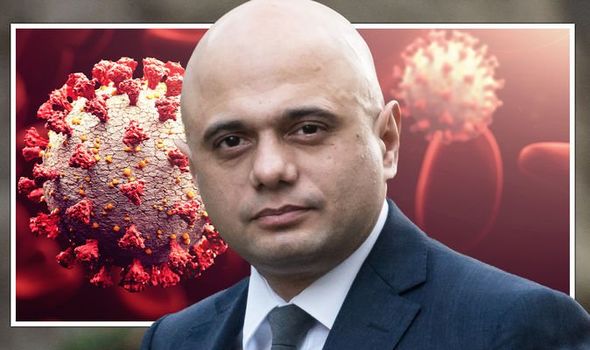 The health secretary is set to scrap the controversial Covid passes in England this month as Covid infections continue to fall and hospital admissions plateau. Mr Javid is said to have told the 100 MPs who voted against the measures late last year that he shared their “instinctive discomfort” for the certificates. Ministers are also on track to ditch widespread working from home guidance when the current Plan B measures are reviewed on January 26, although compulsory masks on public transport and shops could be here to stay. Britain’s Covid cases have fallen week-on-week for the past eight days in a row, with 109,000 new positive tests on Thursday. A Whitehall source told The Times: “There was always a very high threshold for the policy and it looks increasingly likely in a couple of weeks that threshold won’t be met. The way cases are going it will be hard to justify renewing.”

Labour leader Sir Keir Starmer has been branded “an absolute hypocrite” for attacking Boris Johnson over parties in No10, despite being pictured drinking with colleagues during lockdown.

Sir Keir has demanded the PM resign over the latest scandal but a senior Tory hit back at the Opposition, highlighting that Sir Keir has been pictured drinking with party staff last May.

Sir Keir was seen having a beer while standing close to two other people.

The image was taken from outside the window of a constituency office in Durham in the days leading up to the Hartlepool by-election.

The number of people who have died after testing positive for Covid in Scotland has passed 10,000.

A further 9,910 new cases have also been recorded in the past 24 hours, data from the Scottish Government shows.

Figures also show that 1,544 people were in hospital with Covid in Scotland on Thursday, with 50 in intensive care.

Imperial College London confirmed the data in scientific advice published by the British government on Friday.

The reduction in risk from Omicron compared to delta increased to two-thirds when looking at sever outcomes, such as formal admission and death, the researchers said.

Good afternoon I’m Francesca Edwards, I’ll be bringing you all the latest developments on Covid for the next eight hours.

Please feel free to get in touch with me as I work if you have a story or tips to share! Your thoughts are always welcome.

England’s Covid “R” number is estimated to be between 1.1 and 1.5, according to the UK Health Security Agency.

An R number between 1.1 and 1.5 means that for every 10 people infected, they will on average infect between 11 and 15 other people.

The daily growth of infections was estimated at between plus one percent to plus five percent, compared to plus three percent and plus six percent the previous week.

The UKHSA added that cases might be growing by slightly less each day.

No limit on outdoor gatherings in Wales from Friday 21

There will be no limit on the number of people who can meet outdoors in Wales from January 21.

This will allow outdoor hospitality to operate without additional measures and outdoor sporting arenas to re-open their gates.

First Minister Mark Drakeford says the return to alert level 0 will be done in a “careful, phased” way.

This will start from tomorrow when restrictions on outdoor gatherings will be relaxed.

The maximum amount of people allowed to gather will be raised from 50 to 500.

Wales to return to alert level 0

First Minister Mark Drakeford has announced his plan for Wales to return to alert level 0, if the Covid situation remains under control.

He says there have been “early signs of improvement” in the last week and Wales “may be turning a corner”.

He said in Wales, Northern Ireland, and Scotland – where new restrictions were introduced – the infection levels were lower than in England.

Saturday’s Premier League match between Burnley and Leicester has been postponed due to injuries and Covid cases within the Clarets squad.

It’s the fourth Burnley match postponed due to Covid this season.

A league statement said: “The Premier League Board accepted Burnley’s application as the club does not have the required number of players available for the match (13 outfield players and one goalkeeper), due to COVID-19 cases and injuries.”

Animation shows how antibody levels in England have changed over time

Theo Sanderson, a researcher at the Francis Crick Institute, has created an animation to show how antibody levels have changed in England over the course of the pandemic.

The graphs are based on data from the Office for National Statistics (ONS).

Major changes to Covid restrictions are set to be announced today after mounting pressure forced action.

First Minister Mark Drakeford is set to announce that restrictions brought in to curb the Omicron variant will be scrapped in two weeks at Friday’s press conference.

Rules limiting outdoor activities will be lifted first. The Welsh Conservatives accused the Welsh Labour government of having overreacted to Omicron after tighter restrictions were brought in on December 26.

Top civil servant Sue Gray is expected to conclude there is no evidence of criminality in her investigation into No10 parties, The Times reports.

The Met Police has said it would not investigate unless Ms Gray referred it to them.

The civil servant is also reportedly expected to avoid deciding whether Boris Johnson breached the ministerial code by attending a party on 20 May, as it does not fall within her remit.

Wales to bring back crowds at sporting events

Fans are to return to sporting events after being closed out since Boxing Day, Mark Drakeford has confirmed.

Mr Drakeford told BBC Wales: “As from tomorrow, the number of people who can take part in an event outdoors will rise from 50 to 500 and then on Friday of next week, 21 January, crowds will be able to return to sporting events.”

UK economy finally bigger than before pandemic in November

Britain’s economy grew strongly in November to finally surpass its size just before the country went into its first COVID-19 lockdown, official data showed on Friday.

The world’s fifth-biggest economy expanded by a much faster than expected 0.9% in November – before the latest wave of COVID-19 infections and restrictions for many firms – leaving it 0.7% bigger than it was in February 2020, the ONS said.

“It’s amazing to see the size of the economy back to pre-pandemic levels in November a testament to the grit and determination of the British people,” finance minister Rishi Sunak said.

The positive result comes amid a growing wave of infections swept the country, driven by the more contagious Omicron variant.

“The prime minister has tested positive for COVID-19 in a rapid test. She is following current recommendations and will carry out her work from home,” the spokesperson was quoted as saying.

Alex Hawke said he cancelled Novak Djokovic’s Australian visa “on health and good order grounds, on the basis that it was in the public interest to do so”.

“In making this decision, I carefully considered information provided to me by the Department of Home Affairs, the Australian Border Force and Mr Djokovic,” he said.

“The Morrison government is firmly committed to protecting Australia’s borders, particularly in relation to the COVID-19 pandemic.”

James Slack, the Prime Minister’s former director of communications, has apologised for a leaving party held during strict Covid lockdown.

He said: “I want to apologise unreservedly for the anger and hurt caused”.

He said the gathering “should not have happened at the time that it did”.

It comes after Downing Street failed to deny the reported party took place on 16 April 2021, the eve of Prince Philip’s funeral.

Liberal Democrat leader Sir Ed Davey has said it is “clear to everyone” that Boris Johnson broke the law, calling on the police to get involved.

“Cressida Dick mustn’t let him off the hook through a shady establishment stitch-up,” he said.

“The police don’t need the government’s permission to investigate a crime, and they mustn’t turn a blind eye to criminality just because it is committed by Boris Johnson.

“It is ludicrous to pretend that we can leave [the investigation] to a civil servant appointed by Boris Johnson to get to the bottom of this.

“The Met Commissioner might think it’s one rule for Boris Johnson and another rule for everyone else, but that doesn’t make it right. Our city and our country deserve so much better.”

The Welsh government imposed restrictions on large events and businesses in December in a bid to curb the rapid spread of the Omicron variant.

Nightclubs were closed, and the rules meant events were limited to a maximum of 50 people outdoors and 30 people indoors.

Meanwhile, pubs and restaurants were restricted to table service, with the rule of six in place, while workplaces and shops were required to impose social distancing measures.

Meghan Markle books: 3 new biographies on Meghan, when they’re coming out and how to buy