Ministers said there were no plans to open vaccine centres around the clock but an exclusive Express.co.uk survey found such a move would have the support of the public. The online poll found 87 percent (3,026 people) would support the introduction of a service which was open 24 hours a day, seven days a week. Just 12 per cent (440 people) said they would not back such a scheme and 1 percent (32 people) said they didn’t know. A total of 3,498 readers took part in the online survey which ran between 9.30am and 9.30pm on Tuesday January 12 2021.

One reader said: “I would be extremely happy to attend in the middle of the night and I would even offer to attend regardless of the hour.”

Another said: “Most people work daytime so out of hours sounds good.”

And another said: “Of course if we have the staff to do it. Perhaps the 1am to 5am shift would have shorter queues.” 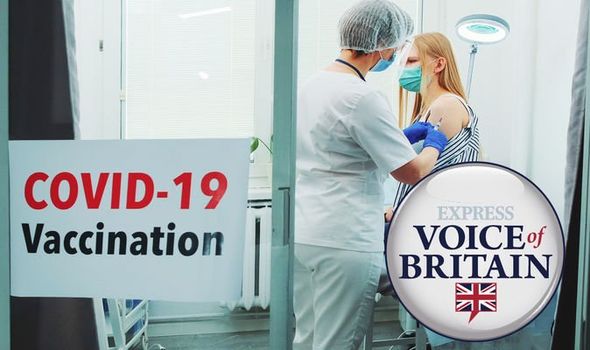 But others thought a 24/7 vaccination service would prove impractical for both health workers and their patients.

One reader said: “People need to think this through.

“Are you happy to be told to attend in the middle of the night? Would you even be happy to elect for it?”

“The productivity after about 8pm and before 8am will be abysmal. Daytime only is sufficient.” 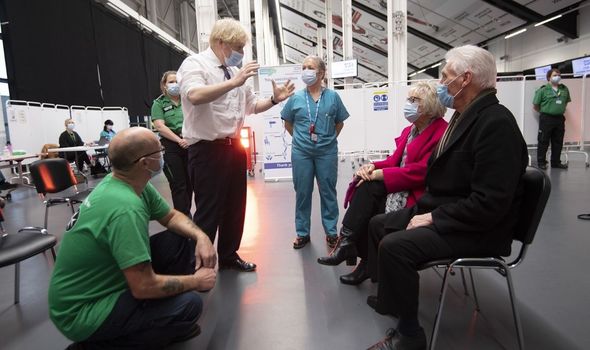 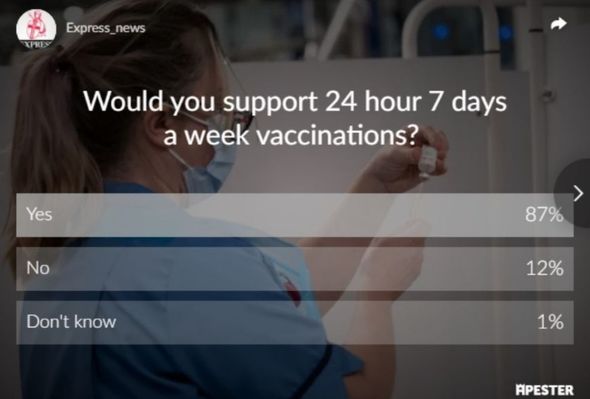 Health Secretary Matt Hancock pledged the NHS health service would do “whatever it takes” to get jabs into people’s arms but appeared to suggest people may prefer appointments in the day.

And the national medical director for the NHS in England, Professor Stephen Powis said that working through the day was the “most efficient” use of staff and volunteers.

Mr Hancock was asked about comments from the Prime Minister’s spokesman who said there was not a clamour for a 24/7 vaccination model.

He said: “We’ll do this if it’s needed, absolutely we will do whatever it takes to get this vaccine rolled out as fast as possible.

He said there would be some groups where a 24/7 model may be the best approach but added: “Our attitude on the vaccine rollout is whatever it takes to do this as fast and safely possible.”

Professor Powis said: “I’m sure for the vast majority of people they would prefer to have their vaccine during the day.

“And the best use of our staff and volunteers… working through the day is the most efficient way of delivering the most vaccine.”

He said the vaccination strategy was to open as many centres in as many different settings as possible.

He said: “I think that will give the vast majority of people a range of choice as to where they can most conveniently and most closely get their vaccinations.

“And frankly, that is the best way to maximise the number of vaccines that we are able to give.”

Royal heartbreak: Why Charles and Diana was ‘a mismatch of epic proportions’

Queen news: Does the Queen congratulate US Presidents? Has she recognised Biden?