Home » Europe » ‘COVID safety has gone out the window’: McDonald’s clamp down on service competitions

McDonald’s have vowed to crackdown on “speed of service” competitions after workers told Sky News the contests were making it impossible to follow the chain’s COVID safety rules.

Pre-pandemic restaurants regularly competed with each other and could see live data and leader boards on screens in their kitchens.

However, McDonald’s UK had said the competitions should not be happening during COVID-19 so that colleagues could concentrate on working safely.

A Sky News investigation has now been contacted by workers in restaurants in Greater Manchester, Merseyside, South Yorkshire, Derbyshire, Cambridgeshire, Norfolk and Kent.

Most say they are exasperated at the lack of social distancing among staff, some said temperature checks had not taken place for months and that hand washing was not happening every thirty minutes as McDonald’s had promised.

Now a worker in Daventry, Northamptonshire has shown Sky News a message they received in mid-February, when UK infection rates were still very high, encouraging staff to “smash it this Saturday!” 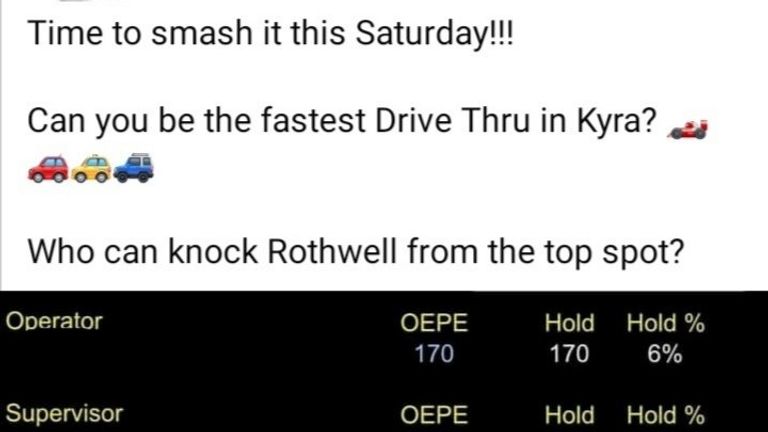 The message on a store Facebook account showed colleagues the latest customer service times within their franchise and asked: “Who can knock Rothwell from the top spot?”

The worker said that competitions were now back to being an “almost daily” occurrence.

They told Sky News: “This happens pretty much every day or during our busy days – we will aim to beat the record hour and that’s known as the Kyra record, which is the highest amount of sales done in an hour.

“When my store was predicted the Kyra record, we had the highest amount of staff in to try and beat the record – this caused no social distancing and because of this made the site not COVID safe.”

Another worker in Cheshire confirmed they too have complained about competitions compromising their safety. They also shared an image of the in-store live data screens that they said was taken in October 2020.

“On our busiest days, everywhere [in the kitchen] gets jammed up… we too are breaking records weekly, just last week we did a record day… in a lockdown,” they said.

“You get a ranking in the country, but your goal is to be on top of your group throughout the day.”

The worker pointed out that McDonald’s UK had made efforts to order the shutdown of competitions at the start of the most recent winter lockdown but said this “lasted two days” in their franchise.

The worker said more staff had been brought into the kitchens to do better in the contests, making social distancing almost impossible.

The employee told Sky News that colleagues were stressed and suffering poor mental health as their safety has “gone out the window as fast as the food”.

They added: “It’s very tough to actually cope with shifts like that.”

“We need to see a change, because it is not right, even if we are just fast food workers – a job looked down on by so many.

“But I would pay people we serve all my wages to try just one Friday shift with us. Just one.”

Earlier this month McDonald’s started an investigation saying it was “deeply concerned” about COVID rule-breaking but added it was confident it related to a very small number of the 130,000 people it employs across the UK and Ireland.

After more workers came forward and complained about competitions starting up again, a spokesperson told Sky News: “We’ve paused all Speed of Service competitions in our restaurants, so it’s really disappointing to hear that in a few instances this is not being adhered to.

“Since the start of the pandemic we’ve been extremely clear that safety must be prioritised over speed, and we’ll be looking into the concerns raised immediately.

“We’ve also re-iterated the importance of this matter to our franchisees and restaurants.”

Kate Middleton pregnant? Duchess give HUGE clue she wants another child with Wills