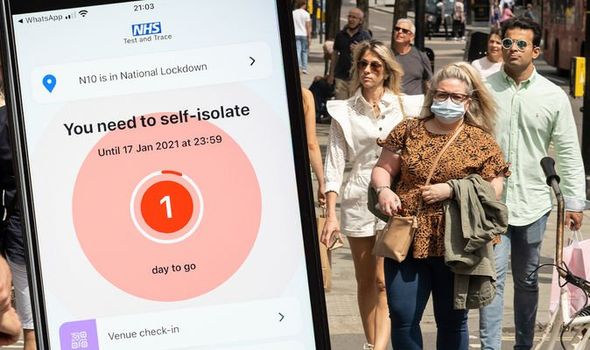 Newly-released figures showed more than 520,000 people received a message that they had come into contact with a person who had tested positive for Covid. This means almost 1 percent of the entire English population were pinged in the week ending on July 7. The data will be a cause for concern as millions count down to “Freedom Day” on July 19.

Nightclubs are set to reopen for the first time since March 2020 and revellers will not be required to wear masks.

The app has been a key weapon in the country’s battle against the virus.

However, it has proved unpopular on many fronts and a recent poll suggested one in five people who downloaded it had later deleted it.

New figures also showed that some 63.0 percent of people who were tested for the coronavirus in England in the week ending July 7 at a regional site, local site or mobile testing unit – a so-called “in-person” test – received their result within 24 hours.

This is down from 76.9 percent the previous week and is the lowest percentage since the week to January 13.

Prime Minister Boris Johnson had pledged that, by the end of June 2020, the results of all in-person tests would be back within 24 hours.

Speaking in Coventry this morning, the Prime Minister said it is “highly probable” that the worst of the pandemic is over provided people are careful when restrictions lift in England on Monday.

“But what I can say is that if we are careful and if we continue to respect this disease and its continuing menace then it is highly probable – almost all the scientists are agreed on this – the worst of the pandemic is behind us.

“There are difficult days and weeks ahead as we deal with the current wave of the Delta variant and there will be sadly more hospitalisation and more deaths but with every day that goes by we build higher the wall of vaccine acquired immunity.”