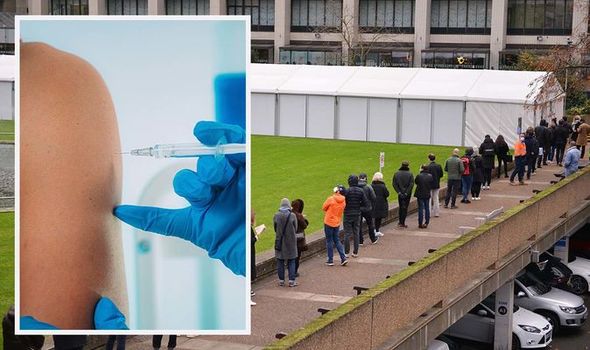 Thousands faced waits of up to five hours for boosters at clinics, hospitals and pharmacies in London, Manchester, Kent, Devon and elsewhere. One queue at St Thomas’ Hospital, opposite the Houses of Parliament, snaked all the way to Westminster Bridge. The rush also caused the NHS website to crash and shortages in the supply of lateral flow tests.

Boris Johnson, who launched the Omicron Emergency Boost on Sunday, insisted people “can get those tests” as he visited a London vaccination clinic.

He added of the demand: “What that also shows is that people are doing the sensible thing, and getting tests as well.”

In Greenwich, south east London, about 200 people waited for a centre to open ‑ while in nearby Deptford, a clinic closed early after running out of doses.

About 300 people queued outside a centre in Kidlington, Oxfordshire, and there were similar scenes in Manchester and Sevenoaks, Kent.

In Exeter, jams developed on the A3052 as people headed for the Greendale vaccination centre, which later suspended walk-in jabs due to high demand.

NHS Digital said more than 140,000 appointments were booked on Monday, as boosters were opened to those in their 30s.

But later it crashed and an error message said the NHS site was “experiencing technical difficulties”.

Meanwhile, the UK Health Security Agency said that “due to exceptionally high demand, ordering lateral flow tests on gov.uk has been temporarily suspended to fulfil existing orders” and advised people to seek out tests locally.

Labour deputy leader Angela Rayner tweeted about the chaos: “Boris Johnson has his priorities in the wrong place. The Government’s inability to procure properly and plan for civil contingencies is reckless.”

Scotland DIVIDED: Sturgeon shamed as half of Scots blame SNP for divisions