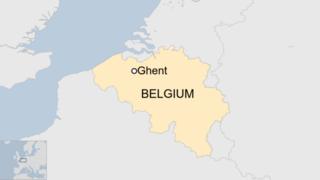 Fifteen people have been arrested for organising the smuggling of people to the UK in the backs of lorries.

Police said on Friday they had found 37 Albanian nationals waiting to cross the channel during a raid on a hotel in the Belgian city of Ghent.

The alleged smuggling gang leader, a 29-year-old Albanian, was arrested in the same city on Monday, leading to more arrests.

Of those arrested, 12 were in Belgium, two in England and one in Germany.

The suspects arrested outside Belgium will be extradited under a European Arrest Warrant to face charges.

The Belgian Federal Police, who led the investigation, co-ordinated with the UK’s National Crime Agency.

They said Albanian nationals, Admir Canaj, 38, and Astrit Ramoshi, 37, were detained in the UK and are accused of heading the UK arm of the network.

The names and nationalities of those arrested in Belgium and Germany have not yet been released.

The migrants, mostly Albanians, would pay up to 15,000 euros (£13,300; $16,400) to the group – which used the hotel in Ghent as a holding area – and would be hidden in lorries with special compartments and co-operative drivers.

Smuggling networks are common in Belgium, where a lot of European road traffic passes through to the UK.