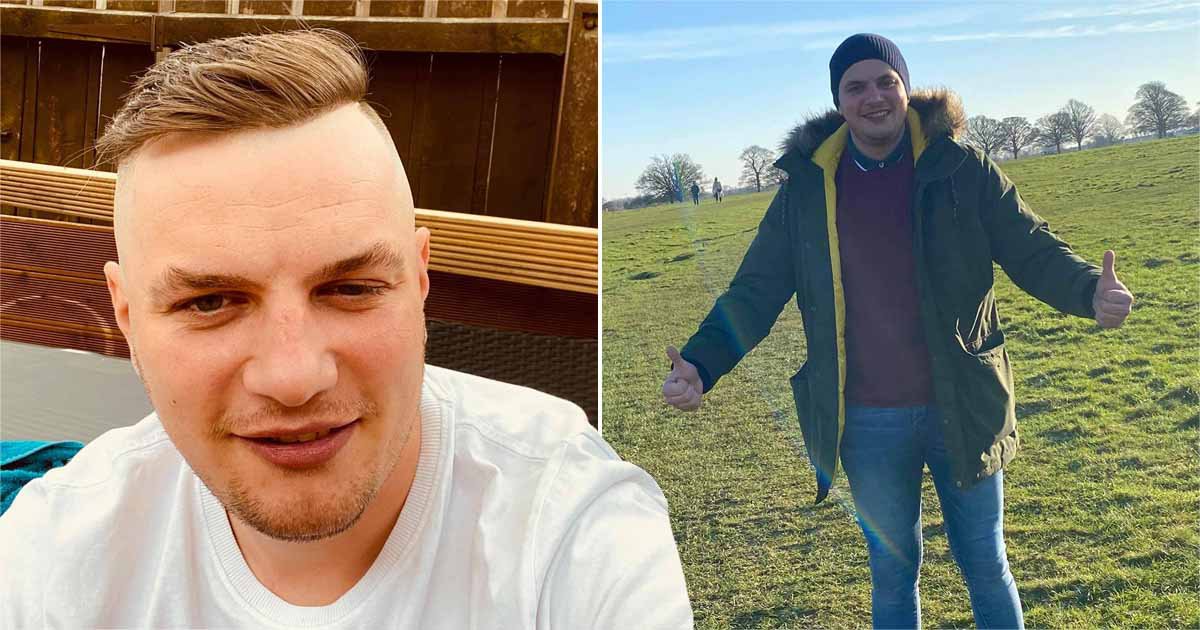 A dad is facing up to two years in jail after getting drunk on duty-free spirits and refusing to wear his face mask on a plane.

Adrian Front, 30, was arrested at Manchester Airport after Ryanair staff reported him on January 29 for his behaviour.

They said he repeatedly removed his face covering despite being warned to wear it during the journey.

The factory worker also told a cabin crew member to ‘f**k off’ in front of 100 fellow passengers, including children.

Prosecutor Katherine Allen said: ‘Police had been given information that there was a disruptive passenger on an inbound flight and they spoke to cabin crew who informed the officers a man on the back row had been drinking his own bottles of alcohol despite being told by cabin crew staff not to drink.

‘The defendant was also refusing to wear his face mask. He had asked to take it off and this was declined – but when the cabin crew walked away, he took it off anyway.

‘He was found with whiskey and vodka and there were a number of children near where he was, and he refused to get off the plane.

‘The officers said they could smell alcohol coming from his breath and his eyes were blood shot. He would not leave the aircraft.

‘Officers hoped he would leave without creating a scene but he continued to be rude, still refusing to leave.’

He was arrested for being drunk but continued to remove his face mask and shouted at officers while in a police van.

‘Children were present at the time and it delayed the other passengers from disembarking,’ Ms Allen added.

‘An officer pointed out, should an emergency have occurred during and after the flight had landed, he did not think he was sober enough to follow cabin crew’s instructions.

‘The exchange took place for around five to 10 minutes before he was taken off the plane.’

Front, who lives in Hull, admitted being drunk on aircraft at Manchester Magistrates’ Court, but the case was sent to crown court for sentencing.

Front’s defence lawyer said he had been been returning home to the UK from his native Krakow, in Poland, after an emotional visit to see his baby daughter.

He had been drinking whiskey and vodka on the back row of the plane after feeling ‘low’ at having to leave the child behind with her mum.

In mitigation, Samantha Corcoran said: ‘He is a Polish national who has been living in the UK for the past four to five years.

‘He was working until recently. He had a relationship with a Polish lady and they had a child together in the UK.

‘However, following the break up his partner has returned to Poland with their child who is now 17 months old.

‘He travelled in January to go and visit his daughter, who he had not seen in six months. Clearly, coming back after being reunited with his daughter was quite difficult for him and he admits that he did consume alcohol as he was feeling particularly low at leaving his daughter.

‘He knows he has no excuses for his behaviour in anyway. He says there was a language barrier as he was unable to communicate in co-operation when the police were asking him to leave the aircraft.’

She added he has no previous convictions and is a man of good character.

Sending the case to Minshull Street Crown Court for sentencing in March, magistrates told Front: ‘We have heard about the awful circumstances that occurred on the evening of January 29 where over 100 passengers and cabin crew were affected because of your behaviour for someone who had been drinking too much alcohol.

‘This was completely unacceptable behaviour, there were children present and had emergency circumstances arisen, 100 people’s lives could have been put at risk.

‘We accept that a father leaving his young daughter in another country can be very painful, but this behaviour was unacceptable.’

Clap for heroes: How long do you have to clap?