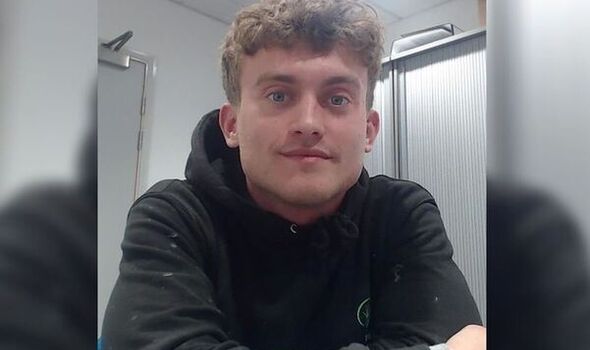 A yob attacked a couple as they were taking their children to the park and left a dad fighting for his life.

Anthony Twigg suffered a fractured skull and bleeding on the brain after Ryan Sumner’s assault. A court heard the father was left homeless because his relationship with his girlfriend Sophie Reid broke down as a result of the incident.

A blue sports car approached the couple, their five-year-old daughter and their newborn baby in his pram as they walked towards Lincoln Square, a park in Widnes, Cheshire.

Sumner, 22, got out of the passenger’s side, confronted his victim in a “dispute over money” then hit him twice to the temple.

A court heard Sumner pushed Ms Reid to the floor, causing the pram to roll into the road – although it was thankfully recovered without the boy inside being hurt.

Sumner admitted inflicting grievous bodily harm without intent during an earlier hearing. He was jailed for two years yesterday at Liverpool Crown Court.

Sentencing, Judge David Hale said: “In the summer of 2021, you deliberately sought out Mr Twigg in the street in Widnes. You had a grievance with Mr Twigg concerning money, the rights and wrongs of which I don’t know the truth.

“But you went up to him and punched him twice in the temple so hard that he sustained a fracture and bleeding. It has had a devastating impact on the life he led – he is now homeless and drinking too much.

“You are now starting to mature and I am told you are working hard for your employer, who has spoken for you. On the other hand, you have the injuries to this man in the street in broad daylight in the presence of children.”

Sumner pointed to his crying loved ones in the public gallery as he was led down to the cells and told them “stay strong”.

The court heard Mr Twigg needed treatment in hospital, where medical staff “might well have saved his life” in July last year.

It was found the dad, from St Helens, Merseyside, had suffered two separate bleeds on the brain and two fractures to the skull, as well as a broken cheekbone.

In a statement read out to the court on his behalf, Mr Twigg recalled being grabbed by the shirt by Sumner and “the next thing waking up in the neurology ward”. He now suffers from post-traumatic stress disorder and is “overwhelmed with fear and panic” if a car pulls up next to him.

Meanwhile, the attack caused tension between the couple, leading to the end of their relationship. Mr Twigg subsequently became homeless and moved into supported accommodation, where his young son is not allowed to visit him.

He added: “I couldn’t hold my children or look after them, which was heartbreaking. I now have to build up courage just to go to the shop.

“I just want Ryan to acknowledge that he could have killed me in front of my partner, step-daughter and son. I wouldn’t wish this on anybody.”

Julian Nutter, defending, described his client – a labourer and a paid carer to his grandma – as a “fool”, adding: “A lack of maturity has been flagged as part of the unhappy background to this. Shortly before this occurred, he received the news that his favourite auntie was terminally ill.

“It is believed that those frustrations lay in the background to him behaving wholly out of character. He has shown remorse.

“There is that other side to him. This occurred out of immaturity and stupidity.”