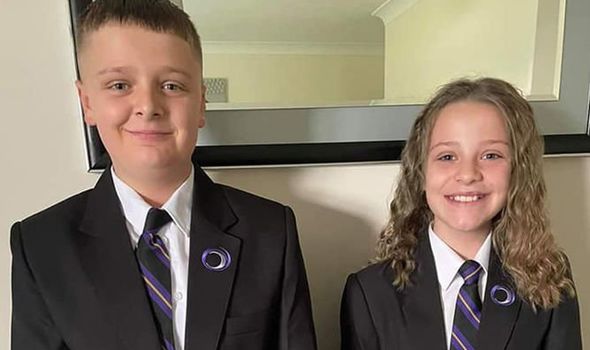 Police found four bodies at 7.25am on Sunday – mum Terri Harris, her children John Paul Bennett, 13, and Lacey Bennett, 11, and Lacey’s friend Connie Gent, also 11. Connie, from Sheffield, had been staying over for a sleepover.

A 31-year-old man was last night still being questioned on suspicion of murder, with detectives not looking for anyone else.

Yesterday John and Lacey’s doting dad Jason Bennett collapsed in tears as he lay flowers outside their semidetached house in Killamarsh, Derbyshire. He said: “I can’t believe I’ll never see them again.

“I just want to hug them and kiss them. I’m heartbroken. Shattered.

“I just want to kiss my babies.”

Afterwards, he wrote on Facebook: “Life will never be the same. My angels. Won’t be long till I’m touching your cheeks, holding you close and kissing your beautiful faces.

He also posted videos of his son and daughter playing.

In one where a beaming John is pushed on a roundabout by Lacey, Jason writes: “My mini me. My heart and soul of my life. You brought me laughter every day.”

On a clip of Lacey laughing as she walks through woodland he calls her “the apple of my eye”.

The siblings’ grandparents Debbie and Trevor Bennett also visited the scene yesterday. They revealed that Jason had to drive home from a holiday in Devon after finding out the tragic news.

Debbie said: “He had to drive home knowing he had lost his children. I don’t know how he will come through this.”

Family members said both children were football fans, with Lacey loving West Ham while John was a Sheffield Wednesday supporter.

Debbie said: “Lacey was very sparkly. John was into his computers. They were the most well-mannered kids you would want to meet. Always please and thank you.

“Terri was a beautiful and wonderful mother. Lacey’s best friend was over for a sleepover. Her parents have got to be devastated.”

Derbyshire Police said they were called to the house over concerns about the occupants’ welfare and found the tragic scene.

One neighbour said the family had only lived in the street for five or six months.

The three children were all pupils at nearby Outwood Academy City, which closed yesterday for mourning.

The school said: “A tragic incident has taken place in the community involving three of our students.

“We will however be open to any students who need our support.”

Last night a blue police tent remained in the front garden of the victims’ house as forensic officers continued their searches.

Derbyshire Police said they’d had no previous contact with anyone involved. They added: “We believe the incident to be isolated, and we are not looking for anyone else.”

Det Chief Insp Rob Routledge said: “We would really like to hear from anyone who saw or heard anything suspicious.”