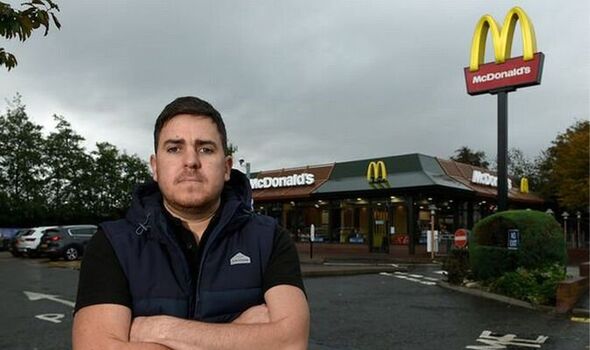 A dad told of his frustration over allegedly being sacked from his Just Eat delivery job after stopping to get fuel, while waiting on a delayed order. The Just Eat delivery driver claims his contract was terminated after the delivery app noted that he had moved from the restaurant to get fuel at the Shell petrol station, a half mile away.

According to EdinburghLive, Lohom Jaimes, 36, claims he was “sacked” from the Just Eat app for filling up his car with diesel as he waited for a delayed order. After getting the fuel, the courier claims he went back to the McDonald’s restaurant on Telford Road, Edinburgh, where the order still wasn’t ready.

Lohom said: “I was away for ten minutes, which seemed reasonable because there were 20 orders before me on the screen inside McDonald’s. It seemed like a perfect chance to get fuel because I knew I would be getting another order immediately after the one I was on.

“But even though I didn’t do anything wrong, I was accused of trying to get some extra waiting time payment and just deactivated.”

Lohom, who is Italian, said that waiting time payments are tiny and the Just Eat systems are too quick to jump to the conclusion that drivers are acting in bad faith if they do not remain rooted in the restaurants while orders are made.

He said: “If I could have been given a chance to explain myself surely this would not have resulted in me having my livelihood taken away. I move fast and my food gets to customers hot but the app isn’t set up to consider anything like that”

Cost of living: Three tips to save money on energy bills

Lohom had bought a car to do the job, costing him £400 a month – a cost he was stuck with. The dad of two said he earned around £700 a week for around 50 hours work. He is now working for a hotel, which pays less money.

Drivers with the global fast food giants have told how they are being removed from the app that allocates work for the courier site.  They also claim they have been given no chance to discuss the “unfair treatment” as the automated system involves few staff looking after personnel issues.

Couriers are not regarded as employees, meaning they have few employment rights. The App Drivers and Couriers Union claims delivery companies deliberately use many more drivers than they need – then can terminate whoever they like at no cost to the business.

According to the union, reasons for deactivation can include:

•Drivers moving outside restaurants like McDonald’s to await deliveries (often at the restaurant’s request). Many claim to have been falsely accused of fraud, as a GPS tracker tells Just Eat they have left the job.

•Couriers forgetting to input an update on a job – like starting, leaving, delivering etc. These simple errors can allegedly lead to fraud accusations and summary deactivation.

•Using third-party software like Shift Grabber to automatically reserve shifts. These have resulted in warnings that advanced to permanent deactivation without any further discussion.

James Farrar, General Secretary of the ADCU, believes hundreds of drivers have been affected, mainly sacked by computer programmes that analyse GPS locational services and other data.

He said: “This is a horror show. We have witnessed the growth of a massive work environment where people are being treated like numbers, and like commodities that can be discarded at will. They will wake up one morning and find out they have been deactivated summarily, with no procedure and no redress. We believe there is a 40 per cent oversupply of drivers and couriers across the board and this is immoral, as it’s a no-lose for the big companies that control everything.

“They can effectively secure the services of a courier, who must compete with others for the shifts. They suffer undue stress yet the company has no outlay and no risk in having a massive, excess workforce on stand-by to generate profit for them.

“This has led to many people using apps like Shift Grabber, which subsequently results in a warning being issued by Just Eat.

“In many instances, with no further action or investigation, this is followed by deactivation from the app, which can be catastrophic to any person relying on it for work.”

A Just Eat spokesperson said the company would investigate the claims made.

The spokesperson said: “We take any concerns raised by couriers on our network seriously and will investigate and take action as needed if a courier feels they have been wrongly deactivated.

“At Just Eat, it is important to ensure fairness for all couriers delivering on our behalf.

“This is why we have measures and systems in place to identify and stop fraudulent activity on our platform and when couriers have breached the terms of their courier service agreement.”