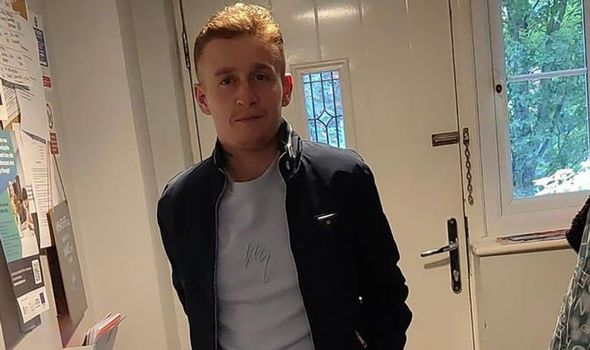 Benjamin was said to have been grieving for his baby boy, Alfie-Lee, who tragically died two years ago when he was just a few days old.

Police said the driver involved in the collision stopped at the scene and has been assisting police with their enquiries.

Benjamin, of Salford, had openly posted about his struggle with the loss of his son Alfie, and in a post on Facebook in October, said he was training to become a bereavement counsellor.

He also played for Follo FC, a Greater Manchester-based football club for dads grieving the loss of children.

The man’s heartbroken sister, Billie-Jo Connor, said news of Benjamin’s death had “left a hole in a lot of hearts.”

She said: “I just really can’t believe he’s gone, he was such a massive part of mine and my kids lives; they loved him so much as did he them.

“He had a heart of gold, he was always there for me and the kids no matter what, I always had his back.

“He lived with me a few times. We had an unbreakable bond, and now he’s gone I’m in absolute bits, he would do anything for anyone.

“I wish I could have been there to help him, so many memories I will cherish till the day I die and meet him again, he will be missed forever and always.”

In a Facebook status posted earlier today, Billie-Jo wrote: “I can’t even believe I’m having to write this right now.

“Early hours this morning, my best friend, the best uncle to my babies, and the most amazing brother with the biggest heart of gold grew his wings and went to join his boy Alfie-Lee up in heaven.

“I’m absolutely heartbroken to say the least, I’m so sorry I wasn’t there to help you Ben, but your (sic) at peace now and back with your boy, which is all you’ve ever wanted, please watch over me and my babies.

“We will miss you forever, RIP Ben, We love you so so much.”

Benjamin’s teammates from Follo FC also paid tribute to him, describing him as an “understanding” and “caring” friend.

Teammate and friend, Robert, said: “I got a notification in the football team’s WhatsApp group this morning saying that Benjamin had passed away.

“The lads are all devastated. We only saw him for a game two weeks ago against the Christie Hospital.

“He was a very funny guy. He was understanding and caring and he would take time out to talk to people who were struggling.

“He was doing his best to make his little boy proud.

“Despite his grief and everything he was suffering he was still there to help others. We will definitely do something in his memory but for now we just want to say how tragic this news is.”

Police are urging for anyone who may have witnessed the collision, or who may have dashcam footage, to get in touch.

In a statement, a Greater Manchester Police spokesperson said: “Shortly after 2.30am on Tuesday 28th December police received reports of a pedestrian being hit by a vehicle on the Manchester bound carriageway of the M602 motorway close to the Regent Road roundabout.

“Police attended and found a 30-year-old man who sadly died of his injuries a short time later in hospital.

“His family has been informed and our thoughts are with them at this difficult time.

“The driver stopped at the scene, and is assisting police with the investigation. No arrests have been made, and the road has since reopened.”