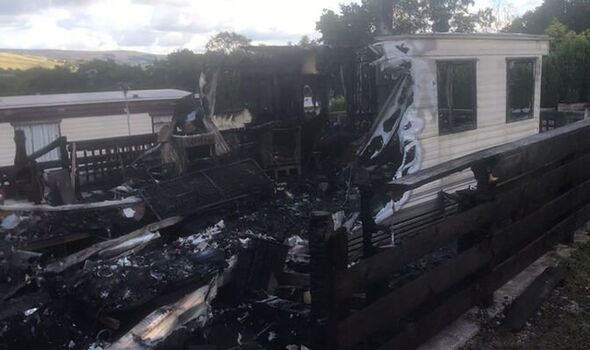 A dad is devastated after his caravan was gutted by a fire.

Terry Norman, 69, lost sentimental items, including photographs and his dog’s ashes, in the blaze at Ringstones Park in Derbyshire.

Speaking to Derbyshire Live, Terry said: “I had a lot of photographs of my kiddies, they are things that can’t be replaced. The ashes of one of my best four-legged friends, Sebastian.

“It’s not so much my Bose speaker went for instance, that can be replaced, it’s the more personal things that meant the most to me.”

Terry is now trying to piece his life back together after the devastating fire.

He was staying in the caravan on a holiday when the fire broke in the early hours but both he and his dog managed to flee the structure.

“There were flames flickering. I’m still trying to get my head around how it turned into an inferno,” Terry, from Huddersfield, West Yorkshire, said.

“I was trying to get a hose then someone said I needed to move my vehicle and by the time I got back there were a couple of people stopping me from going back in but I’ve just lost everything.”

Terry believes the blaze was caused by some batteries he had stored in the shed beside the holiday structure.

The father added: “I’m baffled by it to be honest, how my batteries could’ve just gone up, when I opened the door to the cabin, you could see where all my electricals were set up.”

His daughter, Mercedes, has now set up a GoFundMe page to try and raise some money to help her father return to the caravan site, something he admits he’s keen to do as soon as possible: “I don’t want to walk away with the memory of three or four people who’ve gone out of their way to help me and I don’t want that. You get to a point in life and a place where you want to be and it’s beautiful up there, the people in Whaley Bridge and the area around that are really nice people.

“When I was a young child I used to spend a lot of time on farms and helping out and it’s like catching that feeling again while I was up there, being at nature, I’m not a big city centre, town centre-type person. It’s beautiful and there’s so many nice people up there.”

If you would like to help Terry Norman recapture that sense of being out in the countryside, you can donate to his GoFundMe appeal by clicking here.

News Quiz! Are you smart enough to beat our team of Express.co.uk reporters?

Armed Forces Day flyover mapped: Where can you see the Red Arrow displays?