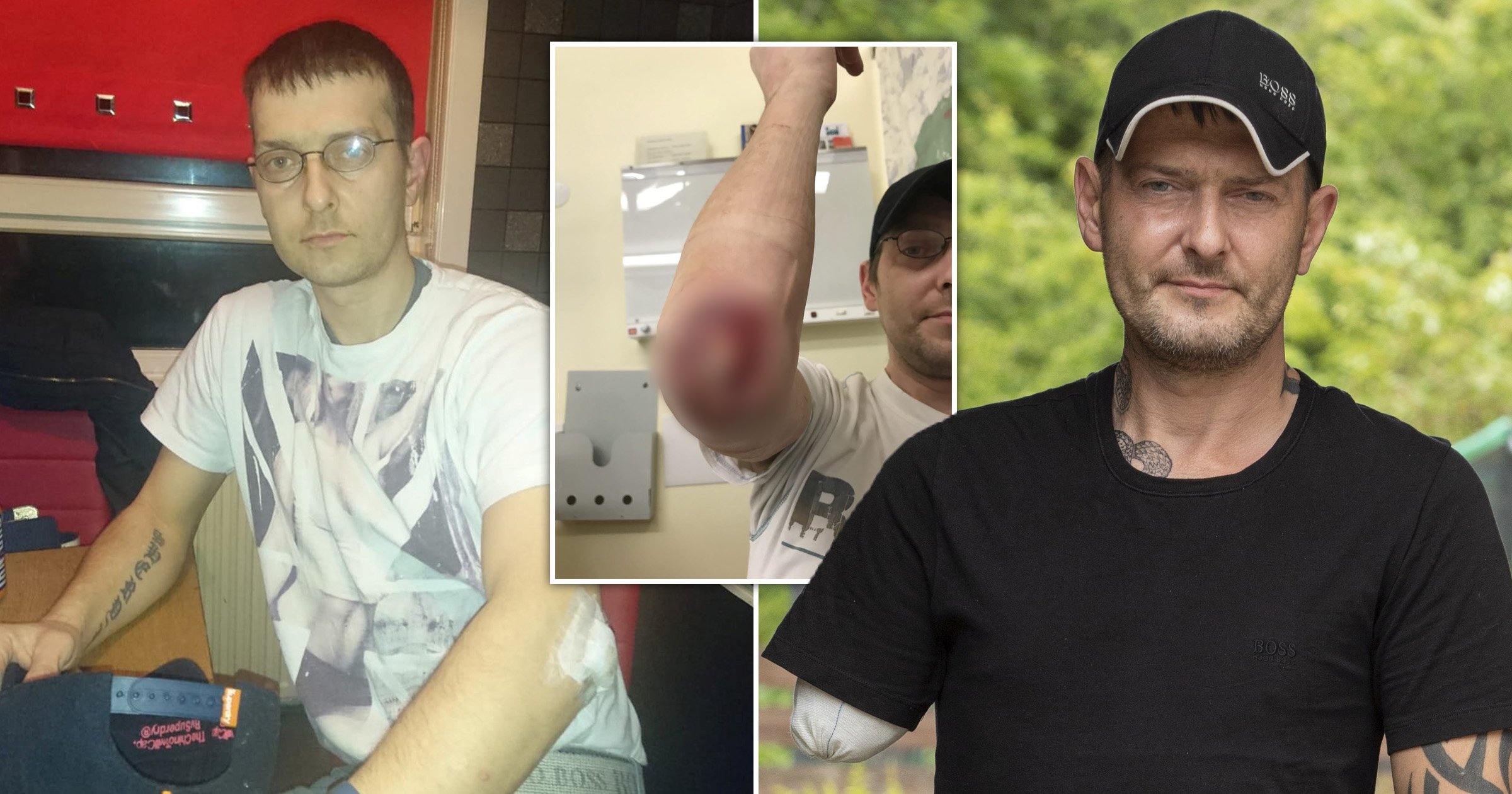 A dad who had his right arm amputated five years after cutting himself while fixing his car is fundraising for a prosthetic limb.

Stephen Rae, 40, lost his limb on 25 May this year, after battling sepsis when he grazed three knuckles as he worked under the vehicle’s bonnet in April 2017.

Tasks such as dressing himself have become impossible and Stephen said he feels infantilised by the disability – but is still able to play Call of Duty with one hand and says it keeps him going.

He has launched a fundraiser and hopes to raise £35,000 to buy a high-quality prosthetic with motor skills in the fingers.

Dad-of-five Stephen, from Cumbernauld, North Lanarkshire, described his infection as a ‘one in 1,000 chance’.

He said: ‘They don’t know how I managed to walk into A&E with infection levels that high.

‘I was given the choice of having my right arm removed above the elbow.

‘If I went into hospital and didn’t come back, it would destroy the kids.’

Stephen had washed the cuts with soap and water after he was injured in 2017 and thought nothing more of it as they scabbed over and appeared to heal.

But in June that year he found his right-hand forearm had swollen up, and was admitted to Hairmyres Hospital for ten days on an IV drip.

In October, the infection returned and he was readmitted.

Just before Christmas 2017, he began getting chills and a high temperature and thought he had come down with flu – but a couple of days later a pea-sized lump had appeared on his arm.

Wife Kelly, 40, pointed to what she thought was jam on the table, but it was blood from a cyst that had burst.

Stephen went to A&E but passed out and woke up in ICU – and was told he had only narrowly survived life-threatening sepsis.

But the nightmare continued until January 2021 when he went to Monklands Hospital where an operation was performed to remove the forearm muscle after he collapsed outside the hospital.

Skin grafts were carried out in the Glasgow Royal Infirmary in March 2021, and the elbow joint was eventually removed on 1 April 2021.

A cage was put on for six months, until November.

Just over a year later, the entire arm was taken off after medics discovered sepsis had returned and believed amputation was the one chance to save Stephen’s life.

Sepsis occurs when the body overreacts to an infection and starts to damage the body’s own tissues and organs.

Sepsis is notoriously hard to spot and symptoms can be similar to those of flu or a chest infection.

The NHS recommends if someone feels very unwell or like there’s something seriously wrong they should call 111.

It adds swelling, redness or pain around a cut or wound ca be a symptom.

If sepsis is not treated quickly, it can result in organ failure and death.

Sepsis, which is sometimes called septicaemia or blood poisoning, cannot be caught from another person.

FINALLY! Brit Islamic terrorists returning from Mid East can be locked up for 10 YEARS