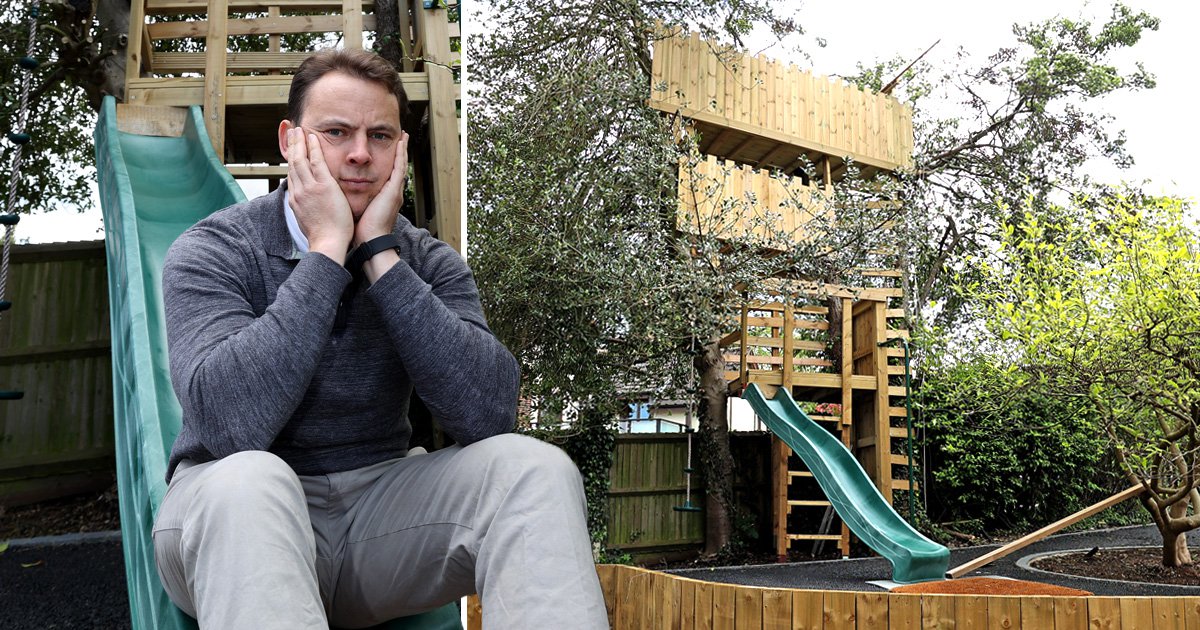 A dad who built a huge treehouse in his garden without planning permission has been ordered to tear it down over ‘health and safety’ fears.

Kai Grunwald, 40, spent £1,200 on the 16ft, three-storey wooden play area for daughters Kara, six, and four-year-old Kayleigh at their home in Berkhampstead, Hertfordshire.

The strategy director says he was in the final days of construction when he received a letter from Dacorum Borough Council demanding the structure be demolished within 28 days.

He says he started the lockdown project because he ‘just wanted to do something nice’ for his girls and says the order he was given is ‘red tape gone mad’.

‘We spent three months working on it over weekends and evenings after work and they absolutely loved it,’ Kai told The Sun.

‘One of the great joys for me, apart from their excitement, was the encouragement, smiles and comments I received whilst making it. It was a lovely way to engage with the community.

‘Since finishing it I take great pleasure in watching people stop, look up at it and smile several times a day.’

‘It’s one of the things that keeps me going as a distraction from staring at my computer screen all day,’ he added.

But the council said in a letter that the treehouse was in breach of planning regulations because it was more than 0.3m in height.

Kai conceded he should have applied for planning permission in advance – but claimed it ‘never crossed his mind’.

Now he and wife Kerryn want to submit a retrospective application in the hope the treehouse can stay.

The dad disputes the structure is a health and safety risk. He insisted it has been built using ‘high quality’ materials and is ‘very safe’.

The letter to Kai is reported to have said: ‘Under permitted development no verandas, balconies or raised platforms (over 0.3m in height) are allowed without planning permission.’

It also raised concerns about the location of the treehouse affecting the ‘visual impact’ of the street’ and not being in character with the area.

The council also highlighted how the tree was over the footpath of a road which could present a safety issue.

The letter concluded: ‘As such the treehouse needs to be removed in its entirety within 28 days of the date of this letter.

‘Failing to comply will result in further action being considered.’

Kai told MailOnline how he plans to do a survey of residents to get their views on the structure in a bid to reach a ‘compromise’ with the council.

He told how his girls will be left ‘devastated’ if the treehouse does have to be pulled down.

The Sun reports the council has invited Kai to apply for retrospective planning permission.

A spokesperson said: ‘The homeowner can apply for retrospective planning permission and we are happy to discuss modifications or alternatives.

‘This would enable the council to assess the impact fully including taking into account any comments which may be received from local residents.’

COVID-19: New data reveals spread of Delta in England – with variant making up 90% of new cases