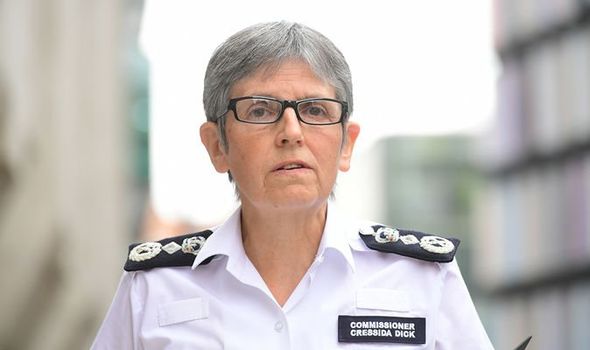 She warned tech firms that pressing ahead with plans to encrypt messaging in their platforms is “damaging to society” because it prevents officers from reading communications between suspects and hinders their ability to protect the public.

Dame Cressida told delegates at the 20th Annual World Summit on Counter Terrorism yesterday: “The tech companies and social media platforms have become much better at working alongside law enforcement and governments to help protect people against a huge range of online threats. I pay tribute to them for that.

“But they are not doing enough to protect people against the harm that takes place on their platforms.”

The system, used in major messaging services such as WhatsApp, works by encrypting the message from the sender’s device.

It is then sent to the intended device, which is provided with a method to unravel the encryption.

Dame Cressida said: “This is just one example of how this wonderful capability that we have to communicate in different ways is not only damaging to society but preventing law enforcement agencies the world over from protecting their citizens.

“How are we supposed to protect children from online sexual exploitation? Or defend ourselves against the next terrorist threat if we don’t even have the power to have evidence held on servers outside our jurisdiction?”

She warned that thanks to the internet, terrorists have a new target audience in the young and the vulnerable.

She said: “There’s a new generation of extremists and the reach of the internet has meant that we have seen increasing numbers of children lured towards terrorist activity.”

She added: “The internet has eroded the physical barriers that would once have restricted terrorists – international borders, the need for clandestine meetings and face-toface communication.”

More young people have been lured into terrorism, with 13 percent of terror suspects arrested in the year to March 31 being under 18.

That is more than triple the proportion in the year before.

“They have learnt they can achieve their aims by inspiring smaller, lowsophistication attacks, carried out in short timeframes by pumping out vast quantities of propaganda.

“In the past, perhaps, recruiting children, or those with mental ill health, would have been an unacceptable risk when trying to execute a complex bomb plot.

“But when you’re simply trying to push vulnerable people over the edge towards crude, direct action such as a random knife attack, the opposite is true.”

Horror as family including two children found dead at home