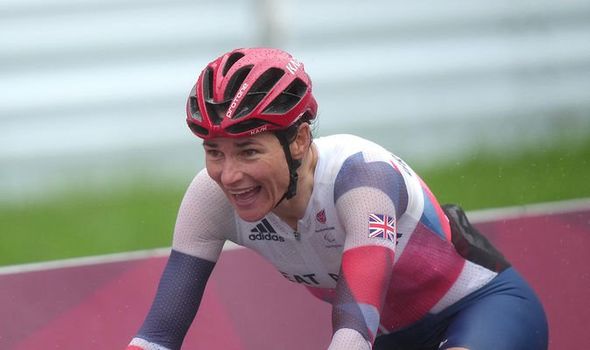 Punching the air as she crossed the finishing line for her incredible 17th gold medal, the 43-year-old declared victory as “the sweetest feeling” having completed the 49 mile looped-circuit race in appalling conditions.

She now has more gold medals than anybody else in British Paralympic history, having competed in eight games and overturned the previous record of 16 set by swimmer Mike Kenny, which had stood since 1988. Her total of 28 Paralympic medals – including those beautiful, multiple golds – makes her the most successful as well as the most decorated British Paralympian of all time. She won no less than five of those golds before turning 19, and she also has the unique distinction of being a six times British (able-bodied) national track champion cyclist.

And, make no mistake, this is a medal-winning story that the Paralympian hero and mother-of-two has no plans to stop telling. Dame Sarah has already indicated her determination to go to Paris in 2024 with the clear intention of adding to her impressive haul.And, if anyone can, she can. The swimmer-turned-cyclist embodies the rare phenomenon of extreme longterm durability in sport. Her triumph this week is the culmination of a career that began 29 years ago with her maiden appearance as a 14-year-old swimmer at the 1992 Barcelona Paralympics, where she won two golds, three silvers and a bronze in the pool.

If there are two words to explain Dame Sarah’s extraordinary success as a Paralympian – firstly as a swimmer and then as a cyclist after changing discipline at the age of 27 due to persistent ear problems – they are composure and grit. “She just seemed content with herself,” recalls Paralympian Baroness Tanni Grey-Thompson, of the determined 14-year-old she first met in September 1992 outside the Paralympic village in Barcelona. Fourteen years later, at the Rio 2016 Games, Storey would surpass Grey-Thompson’s female record of 11 golds.

“At the age of 23 to her 14 I remember thinking that she looked really young,” recalls Grey-Thompson, in her latest column for BBC Sport. She adds: “I remember thinking back to my first Games at 19 and not feeling half as prepared as she looked. She just seemed content with herself, and composed.”

Storey has long spoken of the influence that the wheelchair racer had on her own aspirations, having described Grey-Thompson as an “incredible supporter and mentor”.

Sarah Bailey was born in Manchester on October 26, 1977, without a functioning left hand after her arm became entangled in the umbilical cord in the womb and did not develop fully. It wasn’t until the age of 10 that she joined her local swimming club. Legend has it that she was told that she had started training far too late to expect to win anything – which may have been pragmatic, rather than unkind advice. But, as has been her modus operandi since those first early sessions, Storey decided that the simple answer was to forget the rest and compete against herself.

It’s a focused mind-set that she has maintained throughout the past three decades, as her medal-winning career has continued even while having two children. The athlete is in Japan without the support of her family as Covid-19 restrictions have prevented her husband, fellow cyclist Barney Storey, and their eight-year-old daughter Louisa and three-year-old son Charlie from attending.

Before she went to Tokyo, she revealed she had not expected to continue her sporting career after becoming a mother. “Being able to come back after two pregnancies – that’s got to be my biggest achievement.

I never expected to come back, and it was certainly not a pressure that I had to come back. I’d achieved everything I could have wished for.”

This is also the first Games that Sarah’s parents have not attended – they have long been familiar figures waving customised flags to cheer her on and have offered constant support since the earliest days when she was bullied and faced an eating disorder after early success in the pool. Dame Sarah has recalled feeling like a “walking conversation-stopper” at school with girls mocking her for coming into school with wet hair after early morning training sessions.

She told Judy Murray on Sky Sports’ Driving Force programme: “I told my parents and we tried to be as pragmatic as we could, because you can’t control someone else’s behaviour and if they don’t like you, they don’t like you. You can’t change that a great deal.”

Pushing herself led to an eating disorder as a 15-year old. Her GP warned her of the impact her eating habits could have on her career and advised her to keep a food diary.This was a turning point.

“Doing a food diary was a really good way to justify to myself that I was eating okay,” she has said. “It was correcting something that made my career better.”

Dame Sarah went on to win three more swimming golds, a silver and a bronze, at the 1996 Atlanta Paralympics. This led to an episode of chronic fatigue syndrome. Undeterred, she added to her tally at the Sydney Games in 2000 and Athens in 2004.

But persistent ear problems led to a career change in 2005. After taking up cycling to maintain her fitness, by the end of the year she had broken the paracycling world record in the 3,000 metres individual pursuit. Three years later, at the Beijing Paralympics, she won two cycling golds with a time that would have seen her placed in the top eight of the Olympic finals.

Baroness Grey-Thompson suggests that Storey’s swimming career was “just prepping” for her cycling career, which didn’t start until 2005. She says: “There is part of me that wishes she had found cycling four years earlier.”

Meeting Barney Storey, a fellow track cyclist pilot who in 2007 became her husband, meant that when Dame Sarah made the decision to switch she had immediate access to someone who knew the sport at the highest level.

In 2010, she made history as the first paracyclist to compete for England at the Commonwealth games against non-disabled athletes.

At London in 2012, she won four gold medals. She was made a Dame in the 2013 New Years Honours list – the year she gave birth to her daughter. She won three golds in Rio 2016 – and became the most successful British female Paralympian of all time.

“The main thing that I admire about her is that she works really hard,” adds Grey Thompson.

“That focus and determination I saw in her at 14 is still there.”

So much for a little girl who was told she had started it all too late.