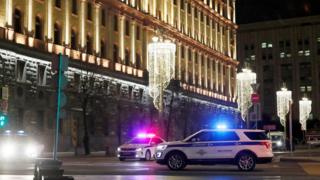 At least one person has been killed and one wounded in a shooting at the headquarters of Russia’s Federal Security Service (FSB) in central Moscow, Russian media say.

The gunman, who opened fire with an automatic weapon in the lobby of the building, was killed by armed police.

Security forces had cordoned off the area and moved bystanders into nearby buildings during their operation.

Details are not yet clear, but several reports in Moscow media said that three officers had been killed. The attacker was said to have opened fire with a Kalashnikov assault rifle, the RBC website reports.

Some footage posted on social media appeared to capture the sound of gunshots in the area while other video showed armed men running away from the FSB headquarters on Lubyanka Square.

Civilians run from shooter, as police run toward shooter. Say what you will about the Russian cops, but this is bravery on display right here. pic.twitter.com/BjevbawFGR

One eyewitness told Reuters news agency that the shooting began at about 17:40 local time (14:40 GMT). “I saw a member of the traffic police running down the road, hiding behind vehicles,” the witness said.

The attack took place on the eve of security services day – a special holiday for security staff – in Russia, and Vladimir Putin was addressing a meeting at the time to mark the occasion.

How to vote tactically to get a second Brexit referendum