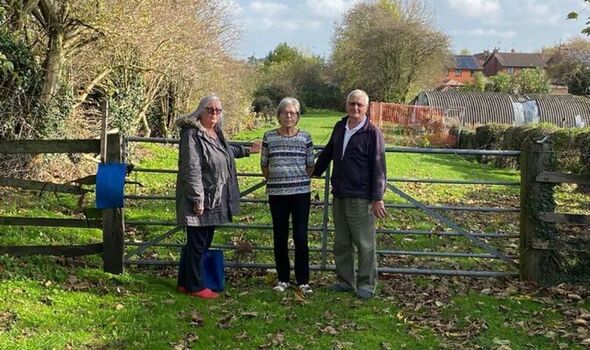 A pensioner is locked in a bitter planning row in the council, refusing to move from her bungalow so that it can be knocked down to give access to development land.

Sharon Gregory ordered officers from Bolsover District Council (BDC) not to demolish her house of 10 years in Clowne, Derbyshire, when they came round to tell her their plans.

She claims the council wants her to “downsize into a coffin”.

The 71-year-old parish councillor says her garden is one of the busiest hedgehog highways in the area and claims she was visited by two district council employees in February under the guise of concern for the protected species.

She told Derbyshire Live: “They sat down and one officer had got a letter with her and they were talking about the hedgehogs and she said ‘it’s not something that we get involved in, but arrangements could be made and they’re safe for now’.”

Being a councillor with extensive knowledge of the area, she was quick to guess that the authority wanted to knock down her’s and the adjourning empty bungalow to allow access to the land behind, which has long since been earmarked for development.

When she questioned them, the officers confirmed this was indeed the case.

“I was stunned and I said ‘well it’s in your best interest I die then isn’t it?'” she recalled.

BDC owns the parcel of land at the rear of Orchard Close that it wants to build houses upon, but there is currently only one access point to it off Rood Lane, which it has been unable to prove ownership of.

An attempt by the authority to buy Rood Lane using a compulsory purchase order (CPO) in 2019 did not go through and since then it has been looking at other ways of accessing it.

Upon approach by the Local Democracy Reporting Service, BDC confirmed that as part of its “usual consultation process” it had offered Coun Gregory alternative accommodation as well as a financial package if she moved, including funding for removals and new carpets, all of which she refused.

The authority said it still believed it owned the section of Rood Lane that gives access to the land in question, however has been “unable to find evidence of this” and steps taken to identify any potential landowner have been unsuccessful to date.

Cllr Gregory said during her time on the parish council she has taken measures to deal with dangerous traffic surrounding the nearby Clowne Junior School, in King Street, including the installation of CCTV.

“Now they’re expecting me to come out of my bungalow to add to the problem,” she said. “What do they expect me to do?”

She added that the school brings groups of children to see the hedgehogs in her garden and now the youngsters are worried about the creature’s loss of habitat.

“The kids are so upset,” Cllr Gregory stated.

Neighbours Eric and Jenny Blackwell, whose home in Rood Lane is right next to the entrance to the land, echoed her concerns about the development and the potential increase in traffic problems resulting from it.

Mrs Blackwell commented: “At the end of the day Clowne is in the 21st Century, but we’re living with 19th Century infrastructure and it cannot cope with all this additional traffic that they’re pushing onto people.

“We have ambulances being blocked in at times and fire engines can’t get through, putting lives at risk.”

A council spokesperson said, “We understand situations like this are upsetting and we always speak to those involved to try and address any concerns and help with any potential relocation expenses.

“A compulsory purchase order (CPO) is the last resort and we have tried to work with Ms Gregory throughout the process.”

The authority’s preferred building contractor Robert Woodhead Ltd, with which it had set up joint venture company Dragonfly Developments Ltd, collapsed in September.

BDC recently took over full control of Dragonfly and plans to continue with its construction plans for the district.

The spokesperson continued: “We have a shortage of properties across Bolsover district and with over 1,000 people on our housing waiting list and government targets to achieve, we have to do all we can with the assets we have available to help meet our local communities needs and provide them with good quality, suitable accommodation.”

Cllr Gregory has sworn to fight any attempts to remove her from her home, stating that whenever the authority calls her about it she always ends the conversation by telling them to “get ready”.

'He is a godsend!'– Local businesses are delighted with Trump’s investment in Doonbeg

COVID-19: On this wall, there is one heart for every Briton who died from coronavirus. But now, they are starting to fade