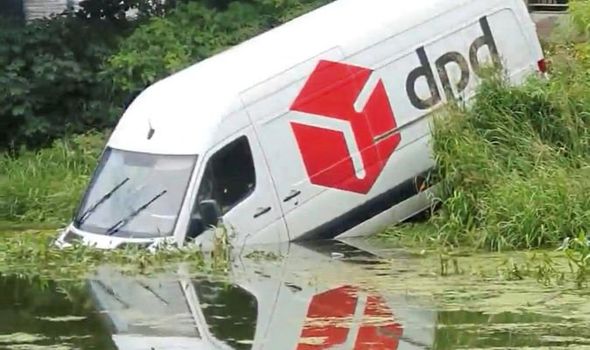 Rachel Shuttleworth, 40, had quite a shock when she was cycling along the Leeds and Liverpool canal and saw a DPD delivery van face-down in the water. The van had slipped off the side of the bank and ended up semi-submerged in the canal, with its windscreen wipers still going.

Fortunately, the driver was not harmed and all parcels were delivered safely.

The incident happened at around 11.50am on Monday, near to the Nelson B&Q store in Lancashire.

Ms Shuttleworth, a local beauty salon owner, said: “When we rode around the corner we spotted it straight away – we assumed it had just happened so rushed ahead to help the driver get free.

“But when we got closer we spotted the seat was empty, which was a relief, and that was when we spotted a police officer at the back of the van, as well as an ambulance and a fire engine nearby.

“When we saw the driver, he was being checked out and it appeared the fire personnel had used a ladder to help him get out.

“Once we realised there was no danger and the driver was okay, I found it hilarious. Despite the fact it had nose-dived into a canal, the windscreen wipers were still going, as if they were needed!”

A spokesperson for DPD said: “We are aware of the incident, and from our point of view we can confirm the driver was fine.

“We are carrying out a full investigation.”

Four passengers fined £10,000 for not declaring they were in 'red-list' country