A huge fire engulfed 300 tonnes of waste at a recycling centre in Wiltshire overnight.

Devizes Fire Station posted a picture of the night sky lit up with orange flames as the blaze ripped through huge piles of rubbish at the site. 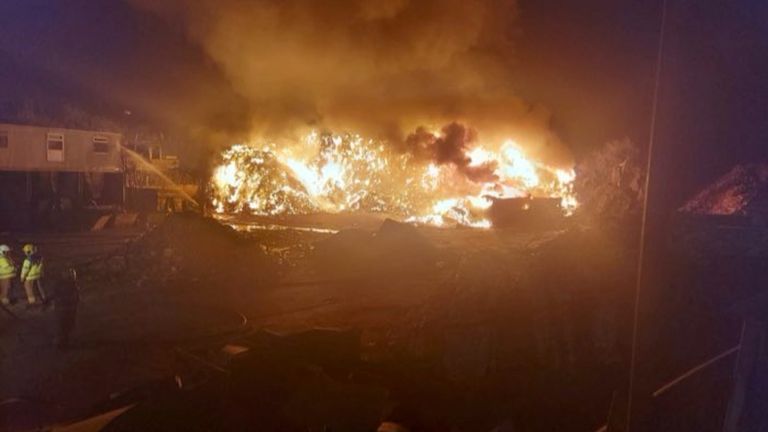 Dorset and Wiltshire Fire Service said crews were still at the scene this morning but the fire was now under control.

They said: “Three fire crews were mobilised to the scene, two from Devizes and one from Calne along with the Command Support Unit from Swindon and two water carriers from Pewsey and Royal Wootton Bassett.

“On arrival, the first crews in attendance found some 200-300 tonnes of residual waste well alight and used two main jets to prevent escalation of the fire.

“On site staff assisted using loading shovel machinery to create fire breaks in the pile of waste, working with firefighters to help contain the blaze.

“As of 6am today (18 November) the incident has been scaled back to one fire engine and one water carrier and we will remain on scene for a number of days to provide a watching brief.”

Devizes Fire Station later shared an update on Facebook that a “number of resources” are still at the scene this morning.

The fire service has warned people living nearby to close their windows to keep smoke out their homes.

The cause of the fire is not yet known.

Boris Johnson Back Home. Parliament Back in Session. What Could Go Wrong?