Home » Europe » ‘Did you see the polls?’ Farage ERUPTS over stunning claim he LOST the European elections

Nigel Farage delivered a scathing rebuke on the media establishment and pro-EU activists for claiming that Remainers won the election. The leading Brexit campaigner simply pointed to the European election, where his Brexit Party’s performance won nearly 32 percent of the vote. This far surpassed second-place Liberal Democrats, who ended with just 18 percent.

Despite this, many commentators announced the Liberal Democrats as the real winners, with several prominent Remain-backing politicians claiming a victory over Mr Farage.

People’s Vote campaigner Alstairs Campbell, who voted for the Liberal Democrats for the first time, repeatedly tweeted that Mr Farage had lost.

Green Party MP Caroline Lucas echoed this sentiment, insisting Farage was wrong to declare a Leave victory in the election. 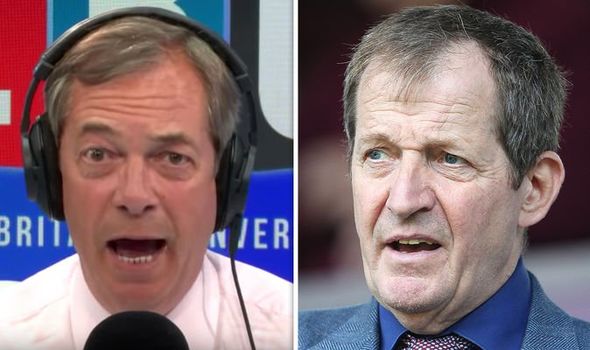 I heard Alastair Campbell claim today that I lost this vote. Have you looked at the polls?

She told the BBC: “I don’t think that’s right, I think the Brexit Party got about 35% of the vote and the strongly Remain parties got about 40% of the vote.

“So either way you look at it the Brexit Party has got nothing like the 17 million they had before.”

This prompted the Brexit Party  MEP leader to fire back.

Mr Farage told viewers on his LBC: “The spin machine is alive and well.

“I heard Alastair Campbell claim today that I lost this vote. Have you looked at the polls?

“I still have no idea quite how they work out the arithmetic on that.”

He added: “Normally elections are won by the party with the highest number of votes and the most seats, at least that is what I thought until this morning when they tried to reinvent all of this.”

Jon Craig in DISBELIEF as Kay Burley doesn’t recognise Tory minister’s name – ‘Who is he?’

Sophie Wessex wedding: How Sophie and Edward paved the way for Meghan Markle