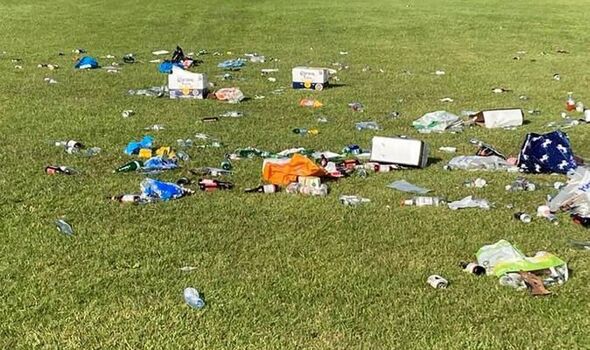 Police were called to reports of anti-social behaviour as some 600 revellers partied on Birchenwood Playing Fields in Newcastle-under-Lyme, Staffordshire, on Saturday. They left a huge mess and so football matches, including youth games, were cancelled on Sunday.

The event – which was not sanctioned by any local authorities or the football team which leases the site – has now been referred to officials at the Newcastle Borough Council and Staffordshire Police, with a view to identifying those responsible for the mess.

Councillor Mike Stubbs, of the Labour and Co-operative Party, said: “Basically they spent the day kicking a football around on the field, they’d got food cooking on the back of vans and made quite a day of it – which in itself wouldn’t be a problem, apart from the fact they left so much rubbish.

“Worse than that – unfortunately they left human waste all over the field, including on the pitches themselves but mostly in the trees and bushes surrounding the area.

“The worst thing about it – apart from the human waste, which is disgusting – was the broken glass. I do Parkrun on a Sunday morning, and there was still glass there when I turned up then – I picked up a few handfuls of glass, but it needed a professional clean.” 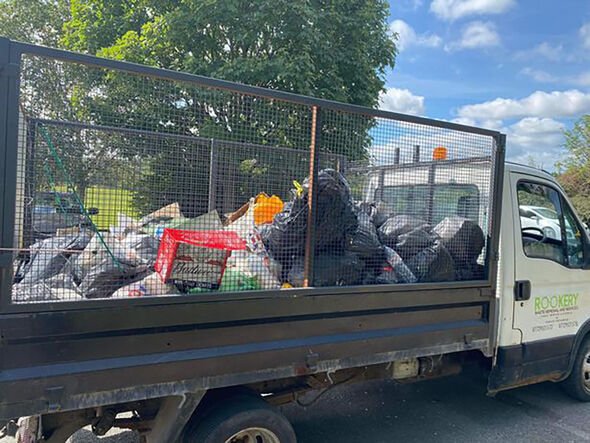 Volunteers helped clear some of the rubbish on Sunday morning and council staff did a full clean-up on Monday.

But the authority, controlled by the Conservative Party, believes the crowd should have treated the park with more respect.

“The car park is wide open all week, because the authority don’t lock the place down,” Councillor Stubbs said.

“The pavilion is secure but the car park isn’t, and there are several entry points. It needs to be secured properly so people are deterred from just turning up.”

Mark Porter, chair of Kidsgrove Ladsandads football team, had a simple message for those behind the mess: “Don’t come back, you’re not welcome.

“It was absolutely disgraceful. There were sheep’s heads, people had been to the toilet in the middle of the pitches, there were beer bottles and barbecues – it was just a complete and utter mess.”

He called for CCTV to be installed in the area, and that it might be necessary to fence off the football pitches.

He said: “It’s really difficult to keep people off. Hopefully, the police can pick it up and investigate who was involved. We’re having to pick up the bill for getting rid of all the waste. We’ve had to sort that out.

“We’ve got some amazing volunteers who turned up on Sunday to clear all the pitches. Kidsgrove Ladsandads operate Birchenwood for the community, it’s a charity to facilitate football for people in the area.”

Stoke-on-Trent North MP Jonathan Gullis was dismayed by the news and aims to hold discussions about what can be done to stop it happening again.

He said: “I feel very sorry for the incredible young people who missed out on their beloved football, which is so important to the local community. I want to pass on my heartfelt condolences to Mark Porter and the Kidsgrove Ladsandads, which is a fantastic organisation and it’s so sad to see that they had their fun taken away by a mindless minority of morons.

“I’m in communication with Newcastle Borough Council and Staffordshire Police to find anyone we can who was responsible or at that event and make sure they face the full force of the law – both with a fine and I hope some community service.”

Mr Gullis said there would be CCTV cameras installed at Birchenwood and at other antisocial behaviour hotspots later this year.

Staffordshire Police confirmed officers were alerted to the event shortly after 11pm on Saturday. A spokesman added: said: “Officers were advised that a large group of people had been arriving at the site since around 2pm.

“The local policing team is currently conducting inquiries relating to the vehicles present at the site. Officers will be working with the local authority in order to prevent a reoccurrence of this activity.”

The authority is now trying to make contact with the group involved to discuss what happened.