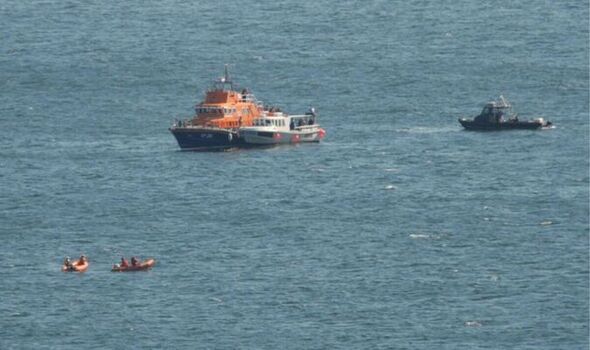 An inquest has heard how two experienced divers died after becomming trapped on the HMS Scylla wreck, off Plymouth.

Andrew Harman and Mark Gallant perished but a third diver, Adam Dent, managed to escape, just as his air tanks emptied, and raised the alarm.

Despite efforts to save the men, they could not be reached and fellow divers could only watch from the surface as two streams of air bubbles petered out. According to Plymouth Live, the inquest heard how “complacency” may have played a part in the tragedy and support was given for a national protocol to be drawn up to prevent similar incidents from occurring.

The inquest, at Derriford in Plymouth, heard how Mr Harman, aged 40 and from Plymouth, and 49-year-old Mr Gallant, from Hatt near Saltash, were among a party of divers who set out from the city in the early evening of September 3, 2021, to dive onto the HMS Scylla artificial reef in Whitsand Bay. They left Sutton Harbour on the vessel Outcast, owned by the Aquanauts diving business.

Mr Harman, a theatre lighting technician, and Mr Gallant, a computer systems analyst, were both described as highly experienced and qualified divers. Mr Harman was said to also be a dive trainer and instructor and Mr Gallant a specialist in wreck diving.

HMS Scylla is a 120m-long former Royal Navy frigate which was sunk in 2004 to form an artificial reef and haven for sea life. It has become a popular spot for recreational divers to explore. The ship lies in 24m of water, 9m from the surface.

Ian Arrow, senior coroner, read statements which revealed how Mr Harman, Mr Gallant and Mr Dent, a qualified scuba instructor who had taken part in up to 500 dives, decided to dive down and “penetrate” the wreck while four other, less experienced, divers swam around the submerged vessel. The three men each had two air cylinders with Mr Harman’s said to contain enough air for a 90-minute dive.

Mr Arrow read a statement from Mr Dent which said HMS Scylla had four decks, deck three being the most dangerous and containing a build-up of silt. This is where the three men went to explore, Mr Dent saying he followed the other two inside.

But while they followed a line down to the vessel, Mr Dent said, in his written statement, that the other men did not use a line inside the ship. This would have enabled them to follow it back out if they lost visibility. In his statement Mr Dent said: “I noticed this but assumed Andy (Harman) knew where he was going. I was not particularly concerned. But things changed.”

Mr Dent’s statement said that after about 20 minutes inside he became disoriented in a dead-end corridor, with disturbed silt making it impossible to see the other men. After 30 minutes of trying to find a way out Mr Dent said: “I was thinking I may not make it out.”

He said he then “literally bumped into” Mr Harman and Mr Gallant but ended up losing them again. As his air ran out he found a small exit, managed to unclip his air tanks and ripped his wetsuit squeezing through. He said he made an emergency ascent to the surface, taking 10 seconds for something that would normally have taken 10 to 15 minutes. Mr Dent raised the alarm and said: “I told them Andy and Mark were trapped in the engine room.”

A statement from Alex Lucas, who was skippering the Outcast, said he was unaware of the crisis unfolding underwater until Mr Dent appeared on the surface “waving frantically” and shouting “they are stuck inside the engine room”. Mr Lucas described how the coastguard was immediately notified and steps taken to get a line down to the wreck. Mr Dent was taken from the water and, after the boat reached Sutton Harbour, taken to hospital.

A statement from Dan Baxter, another diver on the expedition, revealed how he swam down to the wreck, following the stream of bubbles coming from the two trapped divers. But he could not see them inside the wreck and was not experienced enough to enter it himself.

Recovery of the bodies was described as “challenging” and had to be undertaken by a commercial diving company. Mr Harman’s body was found on September 15, 2021, and Mr Gallant’s not until October 12, 2021. Both men were identified by dental records.

A statement from Home Office pathologist Dr Deborah Cook said the men were recovered from deck three and there was no evidence to disprove the theory they both died when the air in their tanks ran out. Mr Arrow said: “The strong steer from the pathologist is that both of these men drowned.”

He recorded the cause of death for both men as drowning and recorded a verdict of accidental death. He said: “They became disoriented and were unable to leave the ship.”

Mr Arrow asked whether a protocol should be drawn up for divers planning to go inside wrecks and said he would write to the Government about this. He said: “Had the divers used a line to get into the wreck they would have been in a better position.”

The inquest heard from DC Andrew Trott-Rodgers, of Devon and Cornwall police, who said: “I would agree there was an element of complacency. Lines were not put down. There was no line to get out.”

PC Julian Fry, from the force’s rural affairs team and working on a national protocol to make wreck diving safer, said such a protocol would assist future divers.

Speaking after the inquest. Mr Harman’s father Michael Harman, and brother Stephen Harman, paid tribute to him. They said he was a highly skilled lighting technician who had worked for Theatre Royal Plymouth for 16 years and then at the University of Plymouth’s The House theatre for three years.

Stephen Harman said: “All three men were experienced and qualified wreck divers. Probably a bit of complacency contributed. So something that reminds people to respect the sea and not to be complacent would be helpful.” His father said: “We don’t want another family to have this experience.”

Ex-boyfriend of Star Hobson's mum begged her to report abuse