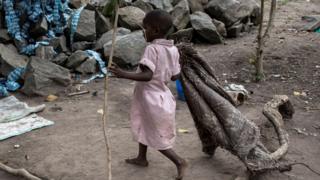 Belgian authorities have asked for DNA samples of children adopted from the Democratic Republic of Congo to establish if their biological parents are still alive, reports say.

They have contacted the adoptive parents of some 15 children to find out if the youngsters were kidnapped, according to Belgian newspapers.

Prosecutors suspect the parents thought they were sending their children to a Kinshasa holiday camp not an orphanage.

The orphanage has since been shut down.

“There are only losers in this story and the judge will have to determine where the best interests of the kids lie,” Flemish MP Lorin Parys told the BBC.

What happened to the children?

Thousands of African children have been adopted in recent years from countries including Ethiopia and Uganda.

Fears of child-smuggling in DR Congo prompted the central African country to halt exit permits for adopted children in 2013. Some cases continued to go through because they had already begun.

DR Congo has one of the highest rates of orphaned children, but it emerged in 2017 that four children who had been adopted in Belgium had been falsely declared as orphans. All four had been aged between two and four when they were taken to Belgium from the Tumaini orphanage in Kinshasa.

A team of Belgian journalists traced the children’s parents to a town about 850km (530 miles) from the capital Kinshasa. The parents said their children had been given the opportunity of going with a young organisation to a holiday camp but had never returned.

Why have new cases emerged?

Since the original four cases emerged, Belgian authorities have investigated a series of adoptions of children who came from the Tumaini orphanage. All 15 are thought to have come to Belgium between 2013 and 2015.

A spokesman for Belgium’s public prosecutor said couples had been contacted with a request for an expert to conduct a DNA test on their adopted child, Nieuwsblad reports.

Belgium’s judiciary has strong indications that the children’s parents are still alive. Like the four other children, the parents are thought to have sent their youngsters to the Tumaini orphanage under the assumption that they were going to a holiday camp.

“They are different age ranges but the kids who’ve been here the shortest time have been here three and a half years, so they have all been integrated,” explained Mr Parys, an MP with the N-VA party in the Flemish parliament.

“The parents here have done nothing wrong and of course the parents in Congo are devastated that they lost their kids under false pretences.”

Belgian-Congolese lawyer Julienne Mpemba has been investigated for her role as head of the orphanage. Her lawyer was unavailable for comment on Tuesday, however he has in the past declared that she is innocent.

Georges-Henri Beauthier, a lawyer representing three of the adoptive families, said the DNA tests would not change anything.

“No-one I know is arguing that the children here came here in a network with false papers,” he told Belgian public broadcaster RTBF. “What my clients have been calling for for two and a half years is that those who are the true heads of these networks are questioned and arrested and answer for their actions.”