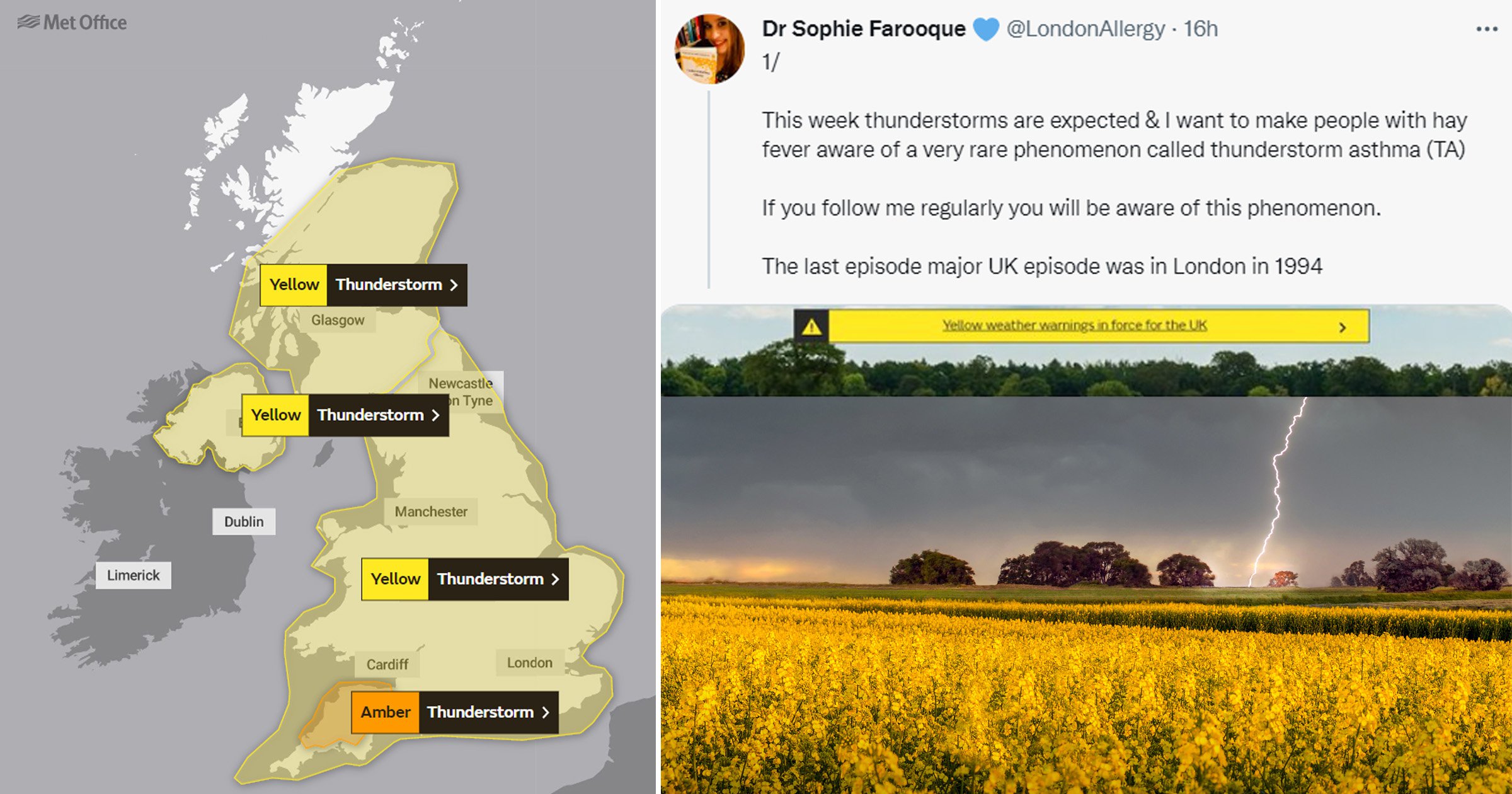 Doctors warn that people with hay fever and asthma are at higher risk of potentially deadly allergic reactions during thunderstorms.

Blamed for thousands of deaths and allergic attacks, it sees moisture brought by storms shatters pollen normally to large to enter humans’ airways into tiny particles.

This then allows them to to travel deep inside the lungs. There is also evidence to suggest lightning strikes may create these freak pollen ‘bombs’.

Along with hay fever sufferers, around 60% of asthmatics whose symptoms are triggered by pollen are at risk.

Allergy expert Dr Sophie Farooque from warned storms currently battering Britain could result in thunder fever on a scale not seen since 1994, when thousands suffered attacks.

She said: ‘This week thunderstorms are expected and I want to make people with hay fever aware of a very rare phenomenon called thunderstorm asthma. The last episode major UK episode was in London in 1994.

Warning of ‘thunder fever’ on her Twitter, she told how a thunderstorm in November 2016 was blamed for killing eight asthmatics.

Dr Farooque, from Imperial College Healthcare NHS Trust, advises people with hay fever or asthma to stay indoors and close windows before and after a storm, and to stock up on antihistamines.

If they must go outside they should wear a mask to limit exposure to pollen particles, she said.

Meanwhile those who experience an asthma attack should take antihistamines, Dr Farooque added.

If suffering a severe attack she advises taking four puffs of the blue asthma reliever and repeating once more four minutes later if necessary. People should call 999 if repeating puffs does not improve symptoms.

In 1994, southern and central England was hit by a thunderstorm-linked asthma epidemic that resulted in about 7,000 people suffering attacks in the space of an hour on the night of June 24.

Researchers later found the epidemic was caused by a storm striking shortly after the peak of grass pollen concentration in London.

Erika Radford, head of health advice at Asthma + Lung UK, said: ‘On its own, pollen can inflame the airways of people with asthma, triggering symptoms such as coughing, wheezing, and breathlessness.

‘The windy conditions during a thunderstorm can make this worse by breaking the pollen down into smaller particles which can then be inhaled deeper into the lungs.’

During thunder fever, the weather also creates updraughts that ‘sucks’ pollen grains into clouds where the moisture within forces them to rupture.

About 1,200 people a year in Britain alone die of an asthma attack, with the death toll at 1,400 in 2018 according to the most recent data available from charity Asthma UK.

Despite bringing relief from the heatwave, this week’s storms have sparked floods and pollen levels being medium-to-high in England and Wales.

Areas in South West England including Cornwall, Devon and Somerset, were battered by rainfall yesterday, resulting in flash floods.

The Met Office issued a yellow thunderstorm warning for all of England and Wales up until midnight last night.

From today the thunderstorm warning will be restricted to southern parts of England and Wales, with some parts of the Midlands also at risk.

The Met Office has issued a more serious amber weather warning for London and the South East, with the possibility of floodwater posing a ‘danger to life’.