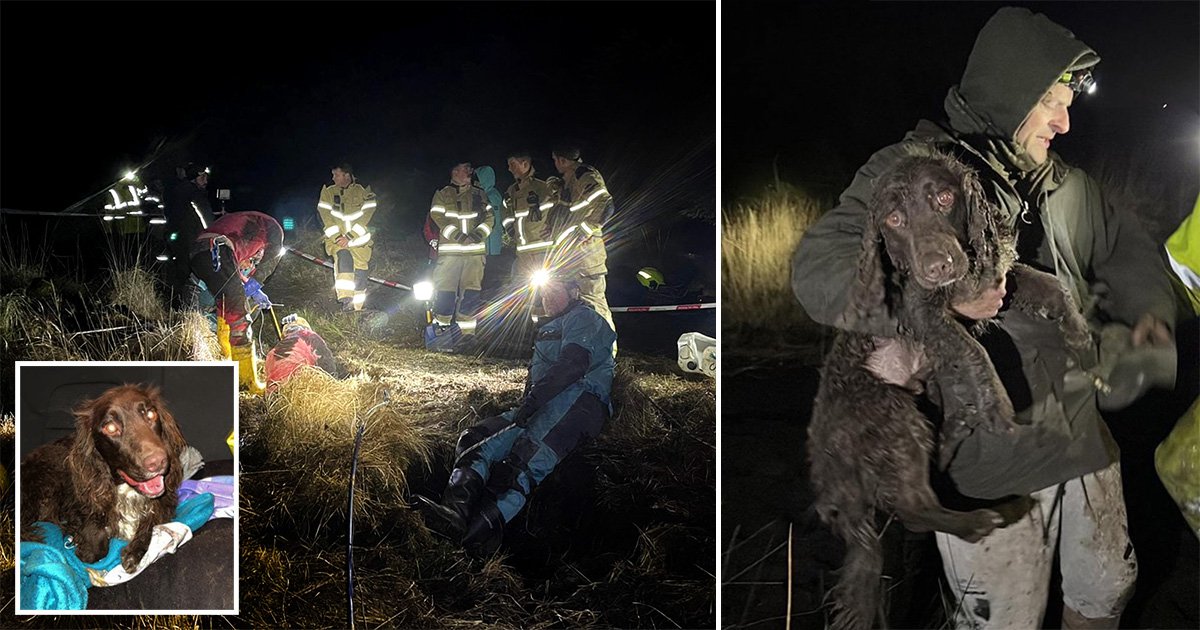 When Reggie the curious spaniel went on an adventure, he probably didn’t intend to get himself into a whole lot of trouble.

But when he accidentally fell down a 22ft crevice on a mountain in Wales he got more than he bargained for in the form of of an entire fire and rescue team trying to save him.

Reggie, who is 11 months old, was investigating on the Llwynypia Mountain in the Clydach forest when he slipped and ended up stuck int he crevice.

South Wales Fire and Rescue Service was called just before 3pm on Tuesday and they used specialist equipment including canine lights and cameras to see what was happening.

But teams were struggling to rescue poor Reggie – leaving desperate owner Leah Davies to appeal for help on Facebook.

Two workers from a local drainage company, Drainforce, saw her post and went to the mountain to help.

And just before 1am yesterday morning – some 34 hours after he became stuck – the dog was finally rescued in a team effort.

Leah said Reggie is in ‘good spirits’ despite his ordeal and thanked everyone who helped with the rescue.

REGGIE RESCUE ð¾ | After a multi-agency effort, Reggie was rescued from the crevice on #Llwynypia Mountain and reunited with his owners ðð

Crews used specialist cameras and lights to help assess the area where the poor sprocker spaniel was trapped ð¹â°ï¸ pic.twitter.com/2BsoyYpuun

She wrote on Facebook: ‘Reggie is in good spirits, the vet has no concerns for him, he really is a true little warrior.

‘The love, support and help from everyone I can’t thank you all enough, we are overwhelmed!

‘A massive thanks to Drainforce Harry Booton [and] Neil Wilson.’

She also thanked a local chip shop for ‘fuelling all the rescue teams’, adding: ‘We got there in the end.’

It’s not the first time an animal has been stuck in a ridiculous place. Last summer a cat somehow got stuck in a miniscule space between two walls, and part of a garage had to be knocked down to get it out.

And in 2020 an entire town in Wales became involved in trying to rescue a cat which was stuck up a tree for several days.