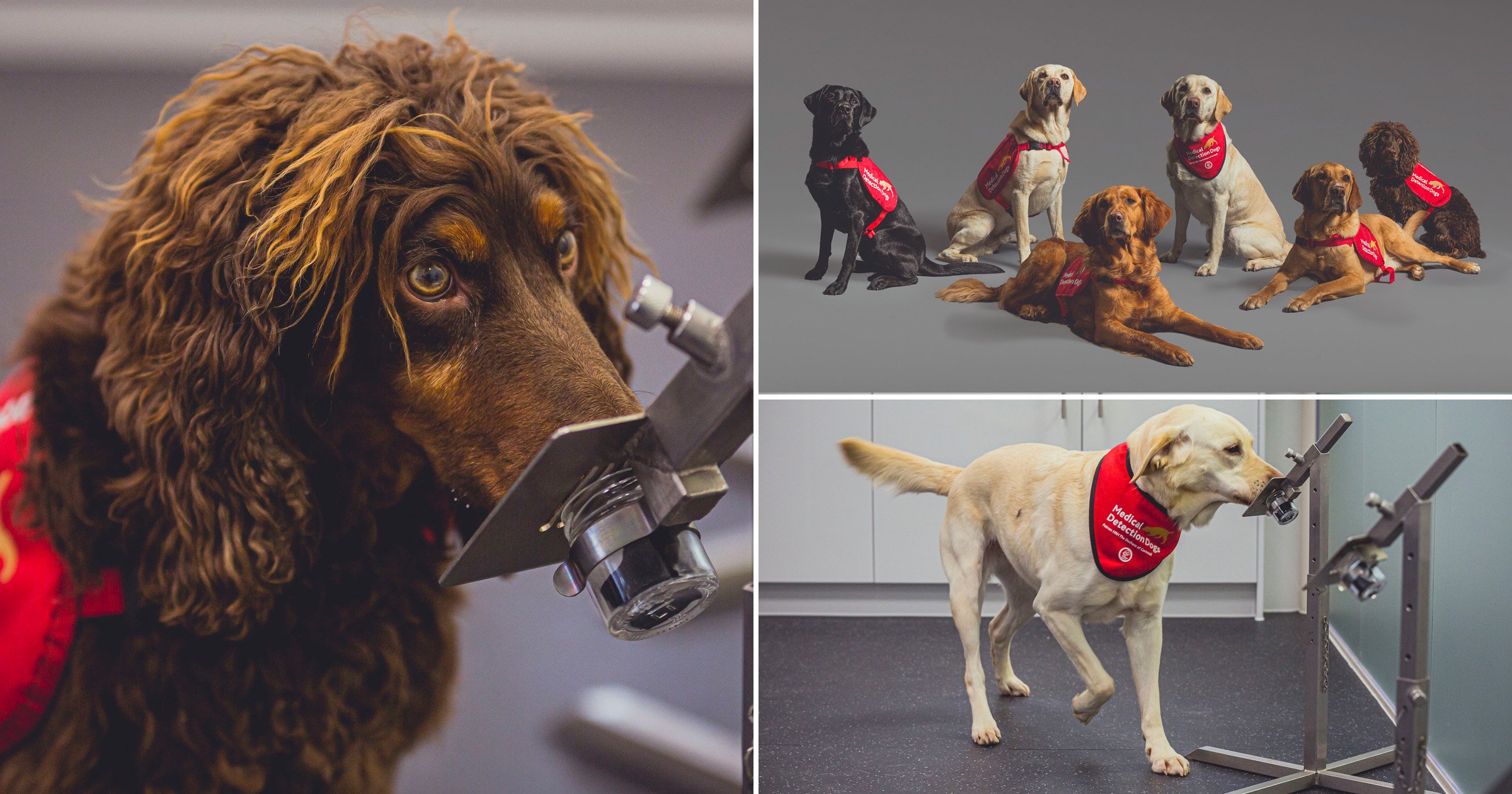 People infected with Covid-19 have a distinct smell that can be picked up by specially trained dogs with up to 94% accuracy, a new study has shown.

Results were based on six dogs who tested 3,500 odour samples donated by the public and NHS staff who either had Covid-19 or were virus-free.

The dogs were found to be more reliable than lateral flow tests and could even rapidly sniff out the samples of asymptomatic Covid sufferers and those who had low viral loads.

The trial, which has not yet been peer reviewed, showed the dogs were also able to indentify infections caused by two different variants, including the Kent strain.

Professor James Logan, head of the department of disease control at London School of Hygiene and Tropical Medicine, who led the project, said: ‘What was great was the dogs that have been trained on the original variant transferred to the new (Kent) variant.

‘They could detect the new variant without any additional training.

‘So this gives us real hope and really suggests that dogs are able to detect different variants of Covid.’

Scientists now believe detection dogs could play an important role in tackling the pandemic by using them to quickly screen a large number of people at once, such as at airports and large sporting events.

The six dogs, Millie, Lexie, Asher, Kyp, Tala, and Marlow, were trained by Medical Detection Dogs (MDD) – the charity Metro.co.uk has chosen to support through our annual Lifeline fundraising campaign.

MDD trains the dogs to sniff out other diseases like cancer, Type 1 diabetes and Parkinson’s, along with teaching them how to alert someone that their health is in danger and spotting the early symptoms of killer diseases.

The trial, part funded by the Department of Health, was double-blind, meaning the researchers nor the dogs knew which odour samples came from people who were infected and those who were clear.

This means that the dogs regularly outperformed lateral flow tests, which are said to be between 58-77% accurate.

Experts now estimate that the use of detection dogs along with PCR tests could identify twice as many Covid cases.

Mathematic modelling based on the results suggests that two dogs could screen 300 plane passengers in around 30 minutes.

Those detected by the dogs would then require a PCR test – which are up to 97% accurate – as part of a proposed ‘Rapid Screen and Test’ strategy.

Professor Steve Lindsay, from the department of biosciences at Durham University, called the results ‘exciting’, adding: ‘Dogs could be a great way to screen a large number of people quickly and preventing Covid-19 from being re-introduced into the UK.

‘Trained dogs could potentially act as a fast screening tool for travellers with those identified as infective confirmed with a lab test. This could make testing faster and save money.’

Scientists said the the next phase of the trial will be to see whether the ‘super sniffers’ can detect people who have the virus in a real-world setting.

Prof Logan said: ‘The results of this study far exceeded my expectations. While the mass rollout of vaccines in the UK is a great success, it will take time to achieve the coverage levels needed for our lives to return to near normal.

‘With the threat of new variants entering the country, the need for testing means we face potential continued disruption for some time to come.

‘That’s where these amazing dogs could play a role.’

Warning over use of 'outdoor' Christmas lights