Millions predicted to descend on London for Queen's funeral

As the nation slept on Tuesday morning, thousands of soldiers in ceremonial uniform rehearsed for the final time ahead of the historic procession today. 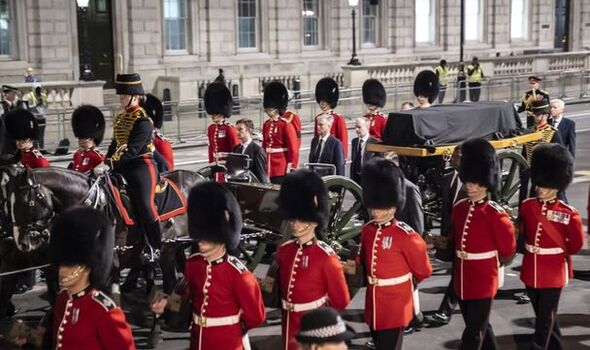 And they told how it was a “very personal connection for everybody” involved as everyone involved has sworn an allegiance to the Queen and “people feel very strongly about it”.

Around 6,000 troops will be involved throughout the 10 days of mourning. King Charles III has to sign off plans for each day’s ceremonies, it emerged yesterday.

Major General Ghika, who is responsible for organising the ceremonial aspects of the Queen’s funeral, described participating in the procession as a “once-in-a-lifetime opportunity”.

“For everybody on parade it’s a once-in-a-lifetime opportunity,” he said.

Speaking about the funeral on Monday, General Ghika said “the eyes of the World will be upon us.

“I’m expecting from everybody on parade that they will deliver a very spectacular performance which will contribute to the funeral.”

Horses that will pull the late Queen’s coffin are having flowers and flags thrown at them in preparation for the ceremonial procession and state funeral.

Troops are pretending to sob and throwing Union flags and flowers on the floor to prepare them for the huge crowds that will line the streets of central London to pay their respects.

A full rehearsal for the procession of the Queen’s coffin took place in central London in the early hours of Tuesday.

Thousands of soldiers in ceremonial uniform gathered at Buckingham Palace for the practice run as part of final preparations for the procession of the coffin to Westminster Hall.

The early-morning rehearsal saw the horse-drawn carriage of the King’s Troop Royal Horse Artillery being led along the route.

Sombre Life Guards carried swords alongside a coffin draped in black, laying it down on the horse-drawn coach. 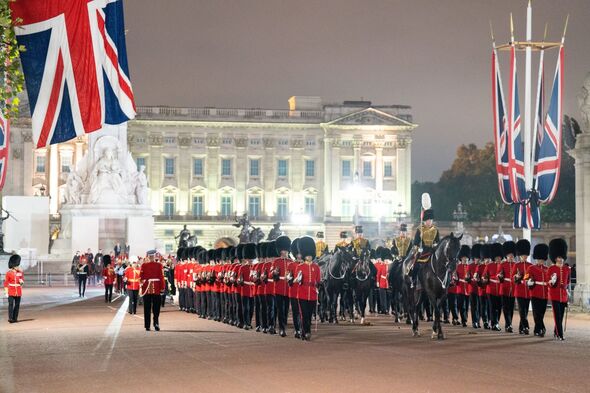 The early-morning rehearsal saw a black coffin placed on the horse-drawn carriage of the King’s Troop Royal House Artillery and marched from Buckingham Palace to Westminster Hall, where the Queen will lie in state ahead of her funeral on Monday.

Funeral marches composed by Mendelssohn, Beethoven, and Chopin were played.

Lance Bombardier Tara Kelly, 25, has been in the King’s Troop Royal Horse Artillery for the past four years and will be the wheel driver guiding the gun carriage down its route in the mounted procession on Wednesday.

She described it as a “massive honour to be part of such a prestigious event” and said she felt “humbled” to represent the King’s Troop.

Lance Bombardier Kelly also took part in the Platinum Jubilee celebrations and was part of the procession for the Duke of Edinburgh’s royal ceremonial funeral in April 2021.

Lieutenant Colonel Jason Burcham, who will conduct the Royal Marines band, spent a period in the mid-90s playing the piano on the royal yacht. Between 1994 to 1996 he was part of a 24-person band that provided entertainment for members of the royal family and their guests on HM Royal Yacht Britannia.

“We were always invariably in different rooms slightly out of sight, so they couldn’t see us, but the music drifted,” he said. 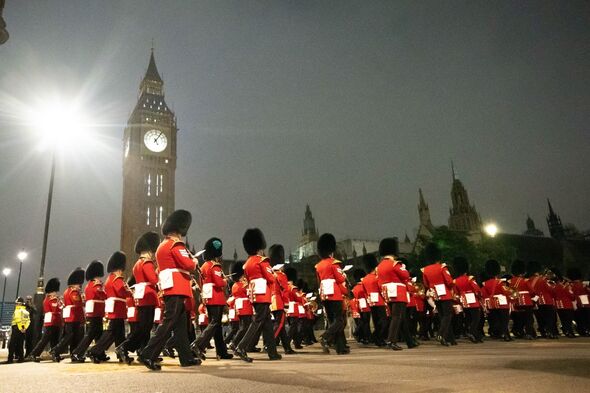 “But there were also these occasions at the end of a meal (where) we provided extra. So anything from a solo item to something comedy.

“We had a bassoonist who used to dress up as Batman and play a bassoon solo, which the Queen loved.”

He said that the Queen “cried with laughter” when she heard it. “It was called Lucy Long,” he said.

“Band Sergeant Roy Allen used to play it. It was the funniest thing, the Queen loved it. We did it on a number of occasions because she asked for it specifically, she cried with laughter.”

Sergeant Tom Jenks, from the King’s Troop Royal Horse Artillery, said that the horses have undergone special training for the funeral, including how to handle weeping mourners, as well as flowers and flags being thrown on to the procession.

Sgt Jenks, who will be leading the gun carriage that pulls the Queen’s coffin, said: “The horses go through preparations and training, so they get taken away after we’ve been training for our normal daily routines.

“They get exposure to loud noises, crowds, flags, flowers, people sobbing, even to the point of banging lots of drums and making aggressive noises.”

He added that the main issue for the horses is moving at a slower pace.

“They’ve struggled to slow them down, and it’s quite a tall order to ask them to walk at a slow march pace.”

Luckily for the procession, they have the experience of Cassius, an 18-year-old horse who participated in Margaret Thatcher’s funeral, on hand.

“So he’s retiring after this parade, and he was not kept on especially but he was kept because we couldn’t retire him until we had another horse of his establishment to be able to replace him,” Sgt Jenks said.

“It’s quite fitting that he gets to retire doing this job.

The Westminster Abbey state funeral will involve up to 10,000 officers, including some from outside forces.

Trains will run through the night and major road closures have been paused to ease journeys for mourners visiting London to pay their respects to the Queen.

Sir Mark said after he was sworn in as the new Commissioner yesterday morning: “It’s a massive challenge for the Metropolitan Police and for me ­personally, but we have been preparing for many, many years.

“There are some very diligent and determined people who have put a lot of effort into this, and indeed myself in my previous roles in the Metropolitan Police.

“Five or six years ago I was involved in some of that planning and I have been involved in a review recently.

“But most of all I have a lot of trust and confidence in the fantastic police officers who are going to support this event and help make it safe.

“They’ve been working with colleagues from across Government, and the Royal Household and others.

“We will have a safe event but we will be putting thousands of officers into this because of the level of security required and the millions of people who want to pay their respects.”

“Former head of royalty protection Dai Davies said: “This will be the biggest operation ever in the UK. I can remember Churchill’s funeral but that didn’t have the terror threat or the issues with protesters and fixated persons.”

How Kate wove special tribute to Queen into her wedding day